‘Our nation has paid the price of its freedom’ 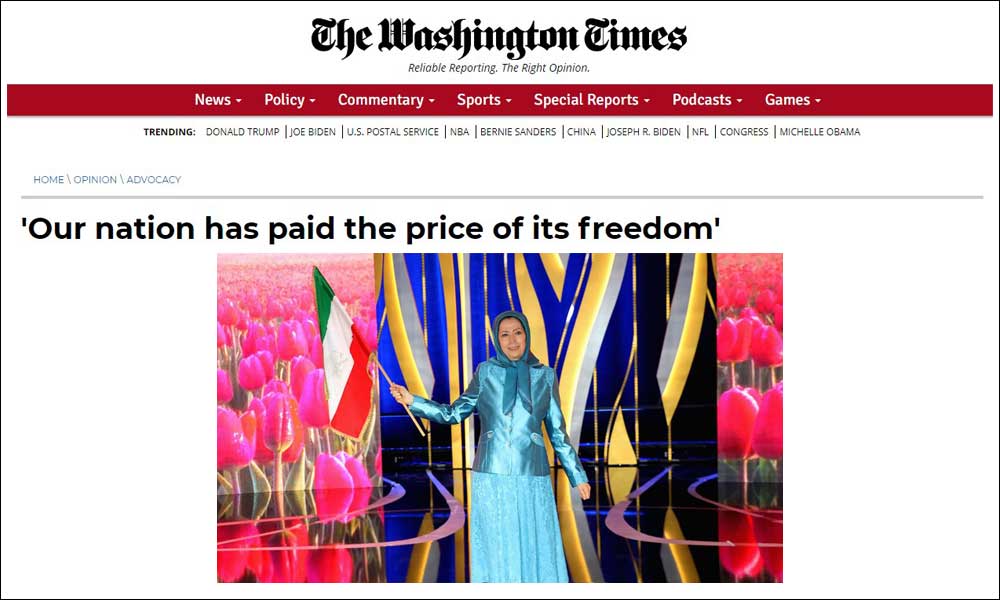 By Maryam Rajavi – President-elect, the National Council of Resistance of Iran – – Thursday, August 13, 2020

Excerpts from a speech to the Free Iran Global Summit

This summit echoes the voice of the Iranian people’s 40-year Resistance against religious dictatorship and fascism and for freedom and democracy.
This is the voice of the largest, the longest-standing, most sophisticated, and most serious organized resistance in Iran’s history, with the roaring river of its martyrs’ blood, and the moving chants of massacred Mojahedin who continued to insist on their belief to the end, against the most murderous and cruel rulers.

This summit is the voice of Resistance Units and rebellious cities across Iran who have put an end to a history of despair, incredulity, and inaptitude, replacing it with the pledge of “we can and we must.”

Today’s summit represents our enchained homeland in three of its most prominent features:

• A rebellious and revolutionary Iran;

• An Iran united in solidarity;

• And a free and democratic Iran of tomorrow.

We have come together to underline three monumental and historic commitments that we have pledged to accomplish.

Our first commitment is that we, the people of Iran and the Iranian Resistance, will overthrow the clerical regime and will reclaim Iran.

Our second commitment is that we, the people of Iran and the Iranian Resistance, will build a free and democratic Iran.

And our third commitment is to remain faithful to our people’s sovereignty and their vote; to not seek power at any cost, but to establish freedom and justice at any cost; to never return to the dictatorships of the Shah and the mullahs. We want to establish a democratic, secular and non-nuclear Iran, as the majority of elected lawmakers in the U.S. and Europe have pointed out.

From all indications, the ruling theocracy is at the point of being overthrown.

Although the virus of the ruling religious fascism and its accomplice, the coronavirus, have joined forces to demoralize and pacify our people and society, we saw during the November 2019 uprising that the protests suddenly erupted in 900 locations across the country. This created a brilliant model for the great uprising that will overthrow the regime.

This generation has “turned its back to the enemy while facing the nation.” It chants “Our enemy is right here. They lie when they say it’s America.”

This generation is a constant nightmare for the mullahs. Indeed, the clerics have come face-to-face with a rebellious generation against which they are vulnerable.

The Iranian Resistance relied on precise and well-documented reports to register the figure of 1,500 martyrs during the November 2019 uprising. The actual figure is much higher.

These uprisings checkmated the Iranian regime’s political apologists, advocates, lobbyists, and paid operatives, by completely discrediting their deception and lies.

The regime’s puppets kept saying that it would be inconceivable for the people of Iran to turn to uprisings and revolution to overthrow the mullahs.

They kept saying that change in Iran will not happen except from within the regime itself.

And time and again, they repeated the mullahs’ false claim about the PMOI/MEK’s lack of popular support. They were searching for young and teenage MEK members when suddenly they saw with their own eyes throngs of young people overwhelming the streets of Iranian cities. And they were irritated when they saw that two progressive students [who supported the MEK] were detained.

This explains why the mullahs and their mob of interrogators and functionaries have unleashed propaganda against the Resistance and the PMOI/MEK. They see themselves about to be overthrown and are in agony over the fact that these uprisings and rebellious youth have adopted the roadmap and the strategy of the PMOI/MEK.

The volcanic uprising in November washed away all unfounded claims.

It was proven that it is possible to inspire and organize protests.

It was proven that despite all the repression and crimes, our people have a spectacular desire and readiness to continue their uprising.

It was proven that the masses of people, particularly workers, destitute people and the youth, stood face-to-face against the regime.

And it was proven that a force capable of overthrowing the regime has emerged and is lurking in the hearts of Iranian cities. This is the very force the regime’s Interior Minister described as “a fighting force of about 600,000-strong” who, he said, destroyed regime centers one after another during the November uprising.

It is this rebellious force which, despite unrelenting arrests, empowers resistance units to constantly regroup, reproduce, and multiply themselves.

Over the past two years, the emergence of rebellious cities and the operations of resistance units against repression, aimed at breaking the suppressive atmosphere, fueling the engine of the uprisings, and mobilizing the people, have made the regime feel the danger clearly and vividly.

Over the past two years, the Resistance Units have overcome martyrdoms and many arrests and have challenged the enemy face-to-face with its closed-circuit cameras and agents in various cities across Iran. They have carried out an average of 20 operations a day to confront the repression, to publicize the resistance or to expose the regime. These very activities serve as the spark for the uprisings and have overwhelmed the regime.

These are telltale signs of the great Army of Freedom. Out of the countless who are suppressed, the force which will save and free Iran is rising up.

Yes, the sun is rising and the blood-drenched caravan of martyrs sings:

Charge against the enemy,

In the final analysis, the mullahs have no solutions

In the wake of the uprisings in December 2017 and January 2018, Massoud [Rajavi] said: “To contain this uprising, the mullahs’ supreme leader has no other option but to solve a number of economic, social, political, and security problems, in which case it would pave the way for his own regime’s overthrow.”

This is precisely the focal point of vulnerability for the mullahs. If they continue to pursue their current path and course of action, namely their belligerence, missile launches, terrorism, intimidation and closing ranks, they will inevitably crash headfirst.

If they make the slightest retreat, namely, if they change their behavior and abandon their suppression, terrorism and belligerence, then they would undermine the very existence of the rule of the velayat-e faqih (absolute clerical rule).

For this reason, [the mullahs’ supreme leader, Ali] Khamenei calls for the creation of “a young and Hezbollahi government” and sees a monolithic Parliament and a murderous Judiciary as the only way out of the vortex of crises and the only way to preserve the regime.

The mullahs and their Revolutionary Guards had made a vital bet on the termination of the arms embargo on October 18, as was stipulated in the JCPOA. For this reason, the international community’s decision to activate the snapback mechanism, would be the coup de grace shot to the regime’s windfall achievements under the JCPOA and the policy of appeasement. Before all else, snapback would blow up the bubble of the regime’s longevity and will ensure its downfall.

To date, the accelerating outbreak of the coronavirus has taken the lives of at least 72,000 people in Iran.

More than any other time, this carnage uncovered the appalling reality of how the mullahs have destroyed the country’s healthcare, nutrition, and social welfare foundations, leaving our people vulnerable to the virus more than any other country in the world.

The abnormal surging trend of the number of coronavirus victims in Iran is a product of the criminal policies of Khamenei and Rouhani. The strategy of launching mass casualties as a barrier against the threat of an uprising and eventual overthrow is exactly designed to pacify and demoralize the Iranian society, rendering it hopeless and paralyzed.

In these critical circumstances, the ruling mullahs have refused to allocate any considerable budget to fight the disease, and even to pay the nurses’ salaries.

During the breathtaking coronavirus crisis, the mullahs continued to launch expensive satellites into space. Concurrently, they pursued their belligerent and terrorist activities in Iraq and Syria and escalated their ominous nuclear activities to a new level. The regime’s Defense Minister recently told the mullahs’ parliament, “The number of missiles we manufactured over the past four years was equal to our production in the prior ten years combined.”

The question is, where do they get the money to spend on such activities? Obviously, by emptying the baskets of our deprived people.

The ruling mullahs must answer why the value of the country’s official currency has plunged so much? Why is there no ability to create jobs? Why is Iran one of the four countries in the world with the highest inflation rates?

By the way, you must tell us what ended up happening with the three trillion dollars’ worth of oil revenues under Khamenei’s rule?

And you must say where did Khamenei amass 100 billion dollars in his executive headquarters?

Where have the IRGC, the State Security Force’ (SSF), Astan-e Qods, and the Mostazafan Foundation get their hundreds of billions of dollars?

The 15 institutions and foundations under Khamenei’s control have a total of one trillion dollars’ worth of assets.

Yes, this is the direct outcome of driving at least 60 million Iranians under the poverty line.

The mullahs’ depraved and criminal regime must be cursed.

Our commitment before the Iranian people and history

We pledged to overthrow the regime, take back Iran and restore all the violated and plundered rights of the people of Iran.

Our people must enjoy the right to be healthy, have shelter, employment, organize and have syndicates, autonomy for ethnic minorities, equal participation in running society’s affairs, gender equality and popular sovereignty.

They must be free of religious slavery and sexual exploitation. They must enjoy freedom of expression, opinion, and choice. They must be pulled out of poverty and be free from fear; this means ending torture, executions, and social and economic insecurity.

We have pledged to restore all these freedoms and rights. We make this pledge before the Iranian people and history. This is our pledge to 120,000 martyrs who fell for freedom.

We urge all governments and international bodies to stand with the people of Iran in this historic showdown against the greatest threat to world peace and security.

The trial of the regime’s diplomat-terrorist in Belgium

The Iranian regime’s leaders planned to launch a major terrorist attack against the Free Iran Grand Gathering in Paris, in 2018. The terrorists in possession of the bomb were arrested by the Belgian Police. The regime’s terrorist diplomat, who delivered the bomb, has been in jail for more than two years.

For the first time, a serving diplomat faces trial in Europe for direct involvement in terrorism. This is a great disgrace for the regime, and it shows that the regime spares no effort to commit any crime and pay any price to annihilate its alternative.

Enjoying diplomatic privileges, the arrested regime diplomat directed this plot under the supervision of the senior Intelligence Ministry officials.

The trial of the four detained terrorists as the perpetrators of this terrorist act is a necessary step. But the real decision makers were Khamenei, Rouhani, Zarif, and Intelligence Minister Mahmoud Alavi. This is indispensable to stop the mullahs’ unbridled terrorism.

The mission of our generation is to overthrow the mullahs’ criminal regime and to restore the trampled rights of all the people of Iran. To accomplish this mission, we have had to endure nothing but torture, flogging, executions, and slanders.

As I have reiterated time and again, we have not come to gain something for ourselves; we have come to sacrifice and pay the requisite price.

We are determined to restore freedom and people’s sovereignty in Iran, and this will happen.

God bless the people of Iran