Maryam Rajavi: Ramadan is the month of change 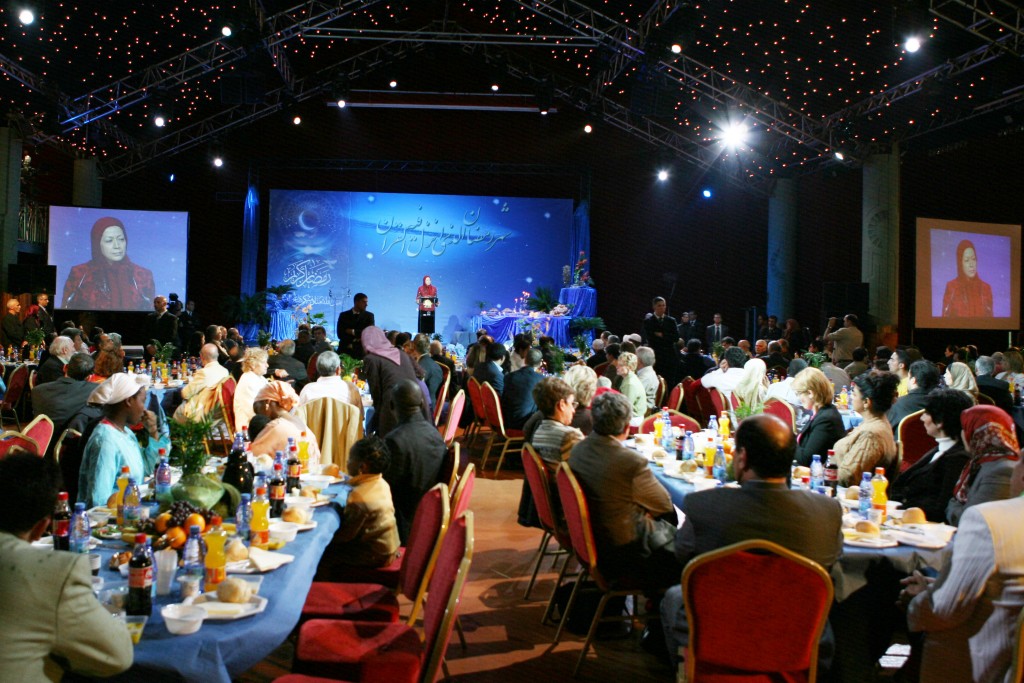 Meeting with Muslim personalities in France in the month of Ramadan

A number of high-ranking Muslim personalities and Maryam Rajavi, President-elect of the Iranian Resistance, attended and addressed the gathering. Among the Muslim personalities were Sid Ahmed Ghozali, former Algerian Prime Minister; Sheikh Khalil Merroun, Imam of the mosque of Evry; Ghaleb Bencheikh, Secretary of the World Conference of Religions for Peace and member of the national office of the Regional Councils of the Muslim Faith; and Dr Abdolkarim Kazbari, Secretary general of the Association of Islamic Students in France.

In her speech, Mrs. Rajavi congratulated all her compatriots in Iran and abroad on the occasion of the month of Ramadan, particularly the combatants of freedom in Ashraf City, Iraq, and sent them her best wishes for success and ever-stronger determination.

She then touched upon the meaning of Ramadan – the month of change and opening – and explained about the night of Ghadr – the night in Ramadan when the Koran was revealed.

She finally prayed for peace, brotherhood and peaceful coexistence among nations and religions, so that the region and in particular Iraq could be rid of the mullahs’ religious dictatorship and regain freedom, democracy and tranquility.

The text of her speech is as follows:

In the name of God, the compassionate, the merciful

I congratulate all my brothers and sisters and all our dear guests who have given us the pleasure and honor of being with us on this Ramadan day. Welcome and thank you for being here.

I would like to start with a verse from the Koran about fasting:

‘You, who are faithful, fasting has been ordered upon you, as it was ordered to those before you, so that you shall you reach devotion.’

According to the Koran, fasting with the aim of becoming spiritually closer to God already existed before Islam in every monotheistic religion. In fact, this is the door to divine mercy which enables us to step back from everyday life and reinforce human values in social life.

Unlike the fundamentalist ideology which makes fasting practically unbearable, the purpose of the fast is to liberate oneself; to liberate oneself from all social constraints and instincts so that genuine human values, such as forgiveness and mercy, flourish. To make devotion replace egoism. To make friendship and love replace hatred and hostility. To make patience and tolerance replace anger and intolerance. To make resistance replace submission and silence in the face of dictatorships. To revive the flame of struggle against poverty and discrimination in one’s heart, by helping the poor or by searching for freedom and social equality. Yes, the month of Ramadan is the month of change.

During the month of Ramadan, there is the night of Ghadr – the night when human beings can change their destiny. This is a change of habits and culture when one can choose new behaviors and a new way of thinking. Human beings are capable. Normally, a whole generation is needed to carry out a change of culture.

Yet, according to the Koran, the night of destiny is worth more than a thousand months.
ليله القدرخير من الف شهر

Therefore, human beings are able to change in one night as much as in one thousand months. This is the proof of their capabilities. The Koran states that the night of destiny leads to the dawn of peace and unity.
سلام هي حتي مطلع الفجر

The Koran adds that through fasting, God wants easiness and an opening for us, not difficulty.
ُيرِيدُ اللّهُ بِكُمُ الْيُسْرَ وَ لاَ يُرِيدُ بِكُمُ الْعُسْرَ

But Iran’s rulers, who misuse religion, have completely reversed this message in the name of Islam. In their speeches and slogans, they pass themselves off as the only representatives of Islam. They say they are opposed to the policies of the big powers and in favor of the oppressed. But this is not true; they use demagogy to cover up their crimes and their plundering of Muslim people in Iran and Iraq.

Every year, during the month of Ramadan, they flog young people under the pretext that they have not fasted, whereas, according to the Koran, there is no constraint in religion.
لااكراه في الدين

Reactionary fundamentalists who are only looking for power are very far from the genuine meaning of fasting and of the other ritual practices. They keep only the formalities and remove its content and its purpose. They lash people under the pretext that they have not fasted and they completely destroy Ramadan’s message of mercy and liberation.

Today, many experts and both male and female political figures speak of two concepts of Islam and the threat of religious fascism.

‘Woe to those who pray in a hypocritical manner and who deprive the people of the common wealth.’ The Koran says that they are the worst enemies of God because they distort the words of God and turn the message of mercy and emancipation into tools of repression, brutality and hostility to peace.

One year ago, the mullahs’ Supreme Leader Ali Khamenei brought Mahmoud Ahmadinejad to power to declare war on the Iranian people and the international community. This policy led to the massacre, torture and detention of thousands of people and thousands of Muslims in Iran, Iraq and Lebanon.

As part of these aggressive policies, the mullahs seek to produce the atomic bomb and openly ignore the resolutions of the Security Council and international demands for the suspension of their nuclear program. By exporting fundamentalism and unbridled savagery, they want to keep in power a regime that 95% of Iranians hate.

Last month, Mojahedin member Valiollah Feyz Mahdavi, 28, who was imprisoned in Iran for five years, was murdered by the regime’s henchmen. For six months, they threatened him with death in order to put an end to his resistance, but he stood firm and just before his death, in a message sent from prison, he complained of physical and psychological torture. But the executioners’ only answer was to murder him and pretend that he committed suicide.

This is not an isolated case. Such crimes against humanity take place everyday in Iran. Sadly, they go of unheard because of the appeasement policy towards the mullahs. We condemn such crimes and demand an international inquiry into the crimes of this dictatorship.

Thus, we are calling for the help of our Muslim brothers and sisters and all freedom-loving people who, like you, support the Iranian Resistance. May God bless all those who support and help the Resistance. And in this month of Ramadan, we thank God for guiding us in our fight against the mullahs’ tyranny and demagogy.

Oh God, we thank you for guiding us in the path of the defense of the Iranian people and of the struggle for freedom, human rights, peace, friendship and solidarity between nations.

Oh God, we ask you to reinforce the determination of all combatants of freedom.

Oh God, protect the Mojahedin in Ashraf City, Iraq, from the mullahs’ plots as they have chosen to give up everything for their people, and reinforce their perseverance and dignity; and may their rights be respected.

Oh God, in this month of Ramadan, grant peace, tranquility and democracy to the Iranian, Iraqi and Lebanese peoples and to the other peoples in the region.

Oh God, consolidate solidarity and brotherhood between Muslim peoples and friendship and coexistence among religions, which is what the mullahs do not want.

Oh God, protect the world from a third World War that the mullahs want to trigger by acquiring nuclear bombs

Oh God, bring forth the day of freedom and victory of the Iranian people

Oh God, we thank you for this month of Ramadan.

May you accept our prayers and our fast.
ربنا تقبل منا انك انت السميع العليم

I thank you and wish you all an excellent evening.

I would like to add a few words in Persian to offer my condolences to an Iraqi friend of the Iranian Resistance.