Maryam Rajavi: Regime Change Is Within Reach and Iranian People Are Capable of Realizing It 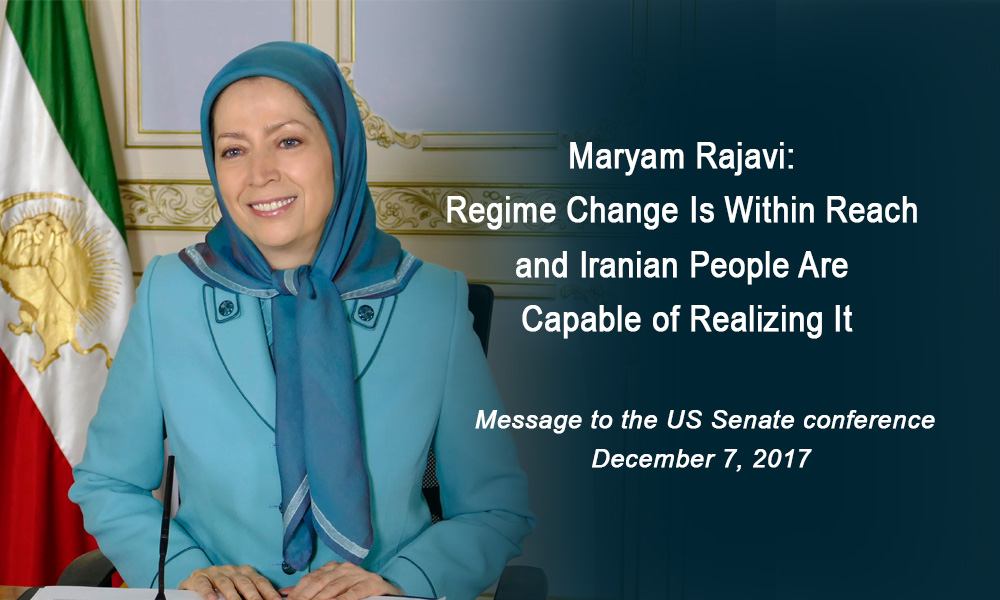 Distinguished Senators,
General Jones, Speaker Gingrich, Ambassador Bloomfield,
Ladies and Gentlemen,
It is a great pleasure to have the opportunity to address your conference. Please allow me to raise an important question.
Is there a solution for the ongoing crisis in the Middle East, or we have to accept the status quo as a reality and let the forces of darkness decide everything?
My answer to this question is: Yes, there is a solution.
I’d like to briefly share my views:
First, it is important to identify the core problem. Of course, there are a number of challenges, and all of them are real. These challenges could be tackled only after the core problem is solved. I cannot stress enough on the importance of the first step which is identifying the core problem.
Second, we need a realistic assessment of the situation. Dictators appear more powerful than what they really are. In 1979, Iran was called “an island of stability” under the Shah. And today, the mullahs’ regime is far weaker than the Shah’s regime when it was overthrown.
Third, identifying the key players and in this case, the forces for change.
Fourth, being prepared to pay the price to solve the problem.
Glancing at the past 3 to 4 decades, it would not be difficult to identify the core problem. There is not a single crisis in the region where the mullahs’ regime is not involved. From Lebanon to Yemen, in Syria and in Iraq, even in the Middle East peace which is a much older problem, the Iranian regime’s destructive role is undeniable.
Focusing on the activities of Iran’s ruling dictatorship does not require military intervention. The regime’s lobby in Washington and Europe attempts to falsely portray firmness and siding with the Iranian people for change, as war mongering. On the contrary, their approach and ignoring the problem would be a recipe for disaster, as it has been in the past.
I believe focusing on the core problem, requires the following steps:
1. Holding the dictatorship accountable for its crimes against the Iranian people and in the region, including taking steps to bring to justice the perpetrators of the massacre of 30,000 political prisoners, those who stayed loyal to Iran’s freedom and were massacred in just a few months on Khomeini’s fatwa.
2. Taking practical steps to drive the IRGC and its proxies out of Syria and Iraq and other countries in the region. The mullahs’ meddling in the region is vital to their survival. Therefore, forcing the regime to end its meddling is a major setback to the dictatorship. Khamenei and other regime officials have repeatedly declared that if we do not fight in Iraq and Syria, we will have to fight in Tehran, Isfahan and other Iranian cities.
It is time for practical steps.
3. Those benefiting from trade with the Iranian regime are not the people of Iran but the IRGC. Therefore, comprehensive sanctions, including sanctions on its banking system, must be imposed on the regime. As I said before, the past policies on making concessions to the religious fascism have been disastrous. The peoples of Iran and the region have paid a heavy price for it.
The most destructive aspects of this policy were a deal over the Iranian Resistance, the terrorist designation of the MEK, breaching US commitments to the MEK members in Ashraf and Liberty, and inaction vis-à-vis their murder.
To end the disastrous past policies, it is essential to recognize the National Council of Resistance of Iran as the only democratic alternative to the religious terrorist dictatorship in Iran. This alternative believes in a free and democratic Iran, gender equality, separation of religion and state and a non-nuclear Iran. Such recognition would send a message of firmness to the mullahs and a message of solidarity to the people of Iran.
Regime change is within reach and the people of Iran are capable of realizing it.
Thank you for giving me the opportunity to share my views with you and best wishes for a successful conference.