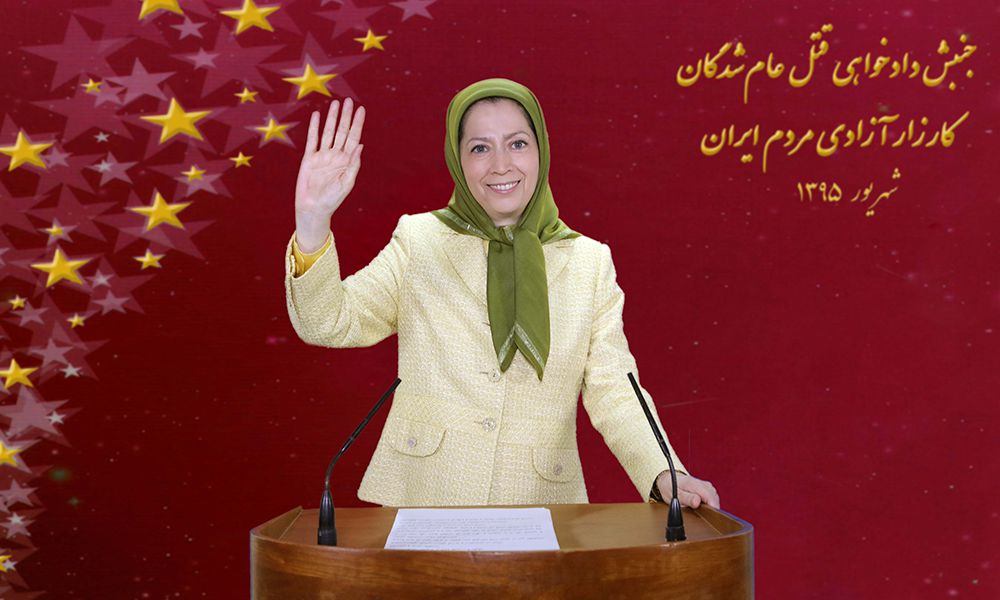 I hail you all for participating in this demonstration to defend the “massacred” human rights in Iran.

I salute the 30,000 red roses who stood firm and did not surrender to Khomeini and his executioners, sacrificed their lives, and remained loyal to their cause, freedom for the people of Iran. Today, after 28 years, their pure blood is shaking the pillars of the mullahs’ oppressive rule.

Khomeini and Khamenei wanted to annihilate the generation of the People’s Mojahedin, but as Massoud Rajavi once said, “Our homeland, history, culture and society have always nurtured the Mojahedin and provided us the possibility to raise pioneers and path breakers from among Iran’s children.”

And this is how this generation remained steadfast, blossomed and grew to become the greatest asset of the people of Iran for freedom.

Today, the people of Iran have targeted the ruling regime with a tide of protest and detestation in a relentless movement of seeking justice. In contrast, Iran’s ruling mullahs have set aside all concealment of the massacre, officially defending it. But they are not able to defend such a horrendous bloodshed legally or politically, or justify it religiously. So, they can only resort to this shameless justification that if they did not kill the Mojahedin, they would have lost their rule and their power.

Accordingly in its statement, the Assembly of Experts recalls Khomeini’s letter to Montazeri which said, “After me (Khomeini), you (Montazeri) will hand over the country to the liberals and through them to the Mojahedin.”

Now, we tell them: you killed and tortured so many people to keep your grips on power but you will lose this power and the people of Iran will build the Iranian people’s sovereignty on the ruins of the Velayat-e Faqih regime.

The mullahs do not even dare to publicize Khomeini’s fatwa for this horrendous crime in their media, because the decree is nothing but an order to commit a crime against humanity which contravenes even their own fundamentalist jurisprudence.

I have already challenged the regime and I repeat it again that if they are true to their words, they must broadcast the text of the decree in their official television but they do not dare to do so. Instead, Khamenei defends “the blessed and radiant image of the Imam” and Rafsanjani praises “the Imam’s unique role and status in contemporary history.” And Rouhani’s Justice Minister Mostafa Pour Mohammadi boasts of being “proud of carrying out God’s verdict for the Hypocrites.”

Hail to the People’s Mojahedin and to the people of Iran for remaining steadfast and for compelling the mullahs to confess their pride in committing such massacre and bloodshed. In this shameless confession, the people of Iran see the beginning of the end of the Velayat-e Faqih regime that will be certainly realized.

Twenty-eight years ago, when the mullahs resorted to this massacre, western governments chose to remain silent. So, the mullahs’ killing machine surpassed Iran’s borders and targeted political opponents abroad, and now it has engulfed the Middle East and particularly, Syria, in blood.

As a matter of fact, there is a direct relationship between the catastrophic executions in Iran and the mullahs’ export of war and terrorism to the Middle East and other countries. As long as this murder machine is not stopped in Iran, as long as the PMOI members in Ashraf and Camp Liberty are massacred and struck by rockets, and as long as prisoners are mass executed such as the 25 Sunni political prisoners who were hanged last month, the Iranian regime’s export of instability, insecurity, and warmongering will also carry on.

On behalf of the Iranian people and Resistance, I urge western governments to stop overlooking the violations of human rights in Iran. It might be profitable for western governments and companies to strike lucrative deals with the Iranian regime represented by the Revolutionary Guards Corps, but in subsequent steps, they will have to spend the same profits on containing insecurity and terrorism emanating from the regime.

I therefore call on western governments, and particularly the Government of Germany, to support the Iranian people’s demand for prosecution of Khamenei and other leaders of the regime on the charge of massacre of political prisoners and committing crime against humanity.

We expect that the government of Germany would condition its relations with Tehran on end to executions and would respect the Iranian people’s demand for regime change.

And in conclusion I would like to address my dear compatriots, the honorable people of Iran, PMOI members, and their supporters all across the world.

Expand the movement to bring justice to the victims of the 1988 massacre. Remain steadfast and persist on this demand so much as to compel the regime to drink the poison chalice of human rights. This campaign is part of the struggle to overthrow the murderous mullahs’ regime and will carry on until the regime’s ultimate downfall.

I hail you for your efforts and suffering in this movement, and I thank you all very much.