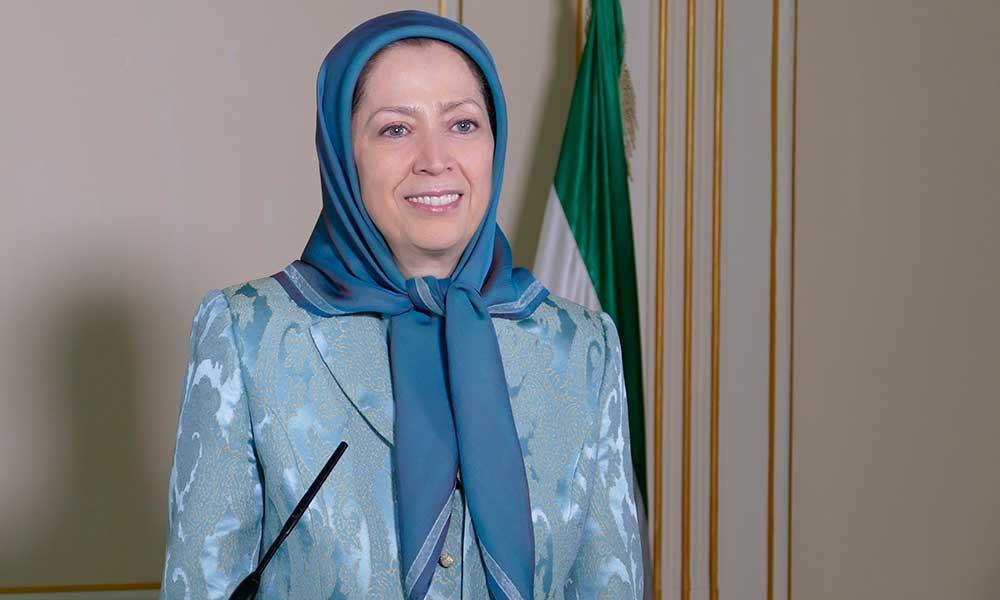 I would like to thank the distinguished personalities who have joined this rally in solidarity with the Iranian people’s Resistance.

Your gathering today, echoes the cries of the people of Iran as well as the voice of human society dismayed by the admission of the president of an anti-human regime to the UN General Assembly.

This year, Rouhani’s participation in the General Assembly coincides with the report of the United Nations’ Special Rapporteur on Human Rights in Iran who has for the first time focused attention on the catastrophic massacre of political prisoners in Iran in 1988.

The UNSR has recalled the executions of thousands of men and women upon Khomeini’s edict and their burial in unmarked mass graves. She has called for an independent and effective inquiry into this crime and revelation of the truth.

The report, which was submitted to the General Assembly with a note by the UN Secretary General, was among the achievements of the Call for Justice Campaign demanding justice for the 30,000 victims of the massacre in 1988.

Do not let the podium of the United Nations become a pulpit for defending a state-sponsor of terrorism and its brutal tyrannical regime. A regime that has violated all international laws and UN covenants, and has trampled upon all the 30 articles of the Universal Declaration of Human Rights.

For years, the regime has turned down the requests of the UN rapporteurs, particularly the Special Rapporteur on Human Rights, to visit Iran.

Yes, Iran’s ruling religious fascism has no place at the United Nations and must be sent out of UN.

Rouhani has acknowledged, himself, that the regime has done nothing but execution and torture over the past 38 years, and therefore, he must not be accepted by the United Nations.

More than 3,000 people were executed during Rouhani’s first term. Over the same period, the regime’s war budget exceeded those of all the previous years. Every year, Rouhani wasted a major portion of the country’s revenues on the slaughter of the people of Syria and the regime’s destructive interventions in Iraq and Syria.

And today, his cabinet is made up of people who either were on the death commissions ordering the massacre of political prisoners, or were among the highest ranking officials of the Intelligence Ministry in charge of torture and executions.

And the most important commitments of such a cabinet are none but the expansion of the regime’s missile program and added manufacturing of weapons to continue their belligerence and terrorism in the Middle East region.

I must reiterate that as long as the international community, including the United Nations, keeps its doors open to the murderers of the people of Iran, the latter will continue their rights abuses and warmongering.

The time has come for the international community, particularly the Western governments, to stop being lenient and making concessions to the religious dictatorship in Iran and remain silent and passive towards their crimes in Iran and abroad.

The international community must compel the Iranian regime to stop its massacre of the people of Iran and suppression of their rightful protests. The world must put an end to the Iranian regime’s crimes in the Middle Eastern countries.

The clerical regime is in a very weak position and it needs its relations with the West more than ever before. The Iranian people expect that the world’s democratic governments condition every commercial engagement with Tehran on the end to torture and executions.

They must recognize the massacre of political prisoners in Iran in 1988 as a crime against humanity.

The United Nations must set up an independent inquiry committee to investigate the 1988 massacre in Iran.

And the UN Security Council must set up a special court or refer the dossier of the 1988 massacre in Iran to the International Criminal Court to arrange for prosecution of the regime’s leaders.

All governments, and particularly the United States, must block all means of trade with the IRGC. Yes, the eviction of the Iranian regime from Iraq, Syria and Yemen, and expulsion of the IRGC from those countries is only solution to the problems in the Middle East.

Of course, our people seek to bring down the religious dictatorship ruling the country. As the Iranian Resistance Leader Massoud Rajavi once pointed out, “As long as the mullahs’ regime exists, its overthrow is our inalienable right and the right our people.”

Today, regime change in Iran is within reach more than any other time. You can see this in the resistance of heroes, the hunger strike of political prisoners and in the movement of the people of Kurdistan who protest the ruthless killing of porters.

This social readiness is also ever more evident in the acts of protest staged by teachers, nurses, workers, students and those whose properties have been looted by government agencies.

These facts attest to the truth that the people of Iran are yearning for fundamental change in Iran more than ever before. To achieve this goal, each one of you bear a great responsibility to seize the opportunities and turn them into an effective force against the mullahs’ regime. This can be made possible only at your hands. Your acceptance of responsibility and efforts are more significant than any other time.

I call on everyone to help expand the campaign for the overthrow of the mullahs’ religious tyranny and the velayat-e faqih regime in Iran.

Hail to you all,
Hail to freedom