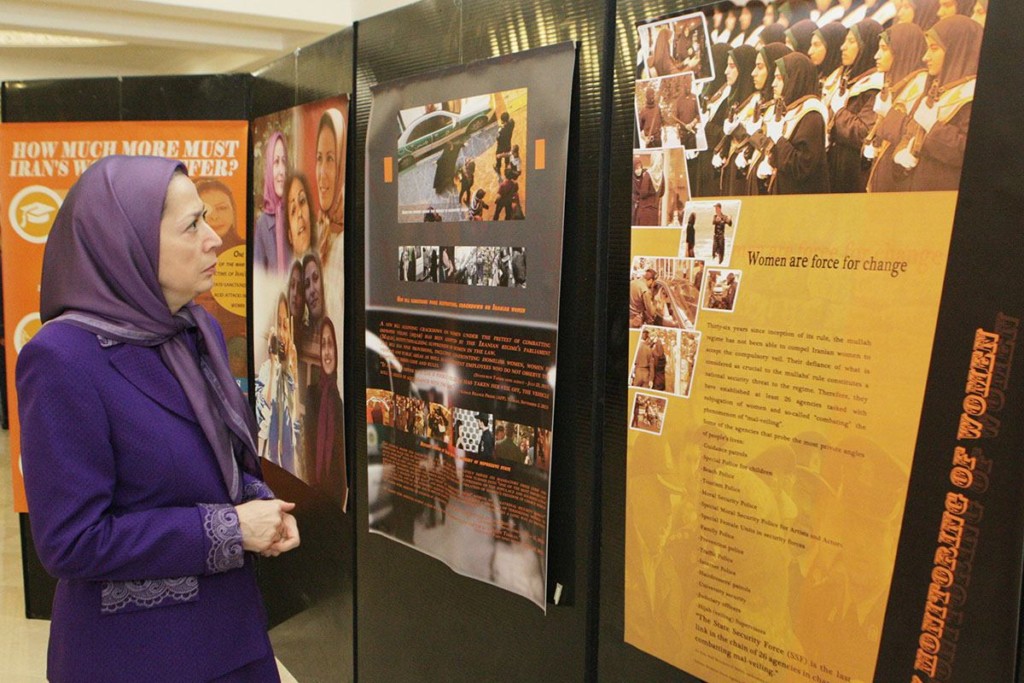 I would like to extend my sincere appreciations to the people and elected representatives of Sweden for their support for the Iranian people’s Resistance.
On the eve of the International Women’s Day, I would like to congratulate this day to my sisters in Sweden and all women of the world. I would also like to appreciate the efforts and sacrifices of those women who fought for freedom and equality.
The International Women’s Day reminds us of a glorious future promised to mankind by women’s equality movement and at the same time, it underlines the ongoing inequalities, violence and exploitation of women in our world.
And Iran is a country where women are living under one of the most oppressive conditions.
The mullahs’ systematic suppression of women initially started under the pretext of Islam and they took advantage of religion to impose a wide range of restrictions on and discriminations against women such as the obligation to wear the mandatory veil.
The Civil Code was drafted on the basis of discrimination against women, and the Penal Code considers women’s worth half of men’s.
According to the mullahs’ Sharia law, many activities of women including ownership, travel, leaving home, education, and employment are contingent on the decisions and desires of men.
Based on the mullahs’ repressive and misogynist laws, girls as young as 13 and sometimes as young as 9 can get married and even punished.
The mullahs have spread the male-dominated culture with decadent customs like polygamy, temporary marriages, and sanctioning of honor killings.
The mullahs have deprived girls from studying in dozens of fields of higher education. Women’s participation in the job market is only 14 per cent.
The women of Iran started their struggle 150 years ago. They have been in the frontline of the struggle against the mullahs’ religious dictatorship and comprise its pivotal force. Tens of thousands of women have been tortured or executed since the Iranian people’s 1979 revolution against the Shah’s dictatorship was usurped by the repressive mullahs.
Women have undertaken key and leading positions in all levels of the Iranian Resistance movement and hold over 50 per cent of the seats in the Resistance’s Parliament.
Women’s equality enjoys a significant weight in our views and plans for future Iran. We particularly emphasize on women‘s equal participation in the political and economic leadership of society.
The people of Iran have demonstrated their deep-seated desire for the overthrow of the mullahs’ religious tyranny by numerous anti-government protests.
To preserve their power against the threat of these protests, the mullahs resort to flagrant violations of human rights at home, and to warmongering and destabilization of the situation in the Middle East.
120,000 executions, including the massacre of 30,000 political prisoners in just a few months in summer 1988, elimination of social and individual freedoms, and full-fledged suppression of the media and cyberspace, are but part of the regime’s record. Despite Rouhani’s false claims of moderation, nearly 3,000 people have been executed so far during his presidential tenure. They included dozens of women and a considerable number of youths who were under 18 at the time of arrest.
In the Middle East, too, the mullahs are sabotaging the region through their Revolutionary Guards Corps (IRGC) by invasions, formation of numerous militia groups, export of arms, dispatch of forces, and engagement in various wars and terrorist operations.
The mullahs had a significant role in the massacre of half-a-million people from the innocent people of Syria through their all-out support for Bashar Assad’s dictatorship and military engagement in Syria.
The regime’s crimes in Iran and bellicosity in the Middle East are dangerous for the world and the international community must no longer sit idle in this regard.

We urge the Swedish Parliament, human rights advocates and women’s rights activists to urge their government to:
Make continuation and expansion of economic and political relations with the Iranian regime, and diplomatic visits to our enchained country contingent on end to executions particularly the execution of women and minors. The experience of the past 35 years shows that these visits and relations embolden the Iranian regime in executions, torture and violations of women’s and human rights.
Demand expulsion of the Iranian Revolutionary Guards Corps and its Quds Force from Middle East countries and lead the initiative to place the IRGC, the Ministry of Intelligence and other agencies in charge of suppression and export of terrorism on the terror list.
Recognize and respect the Iranian people’s struggle for regime change.

Once again, I deeply thank all your efforts in support of the Iranian people’s Resistance and particularly the women of Iran.