Maryam Rajavi: Tape recording of Mr. Montazeri’s Meeting with Those Responsible for Mass Executions of Political Prisoners is Regime Leaders’ Responsibility for Crimes Against Humanity 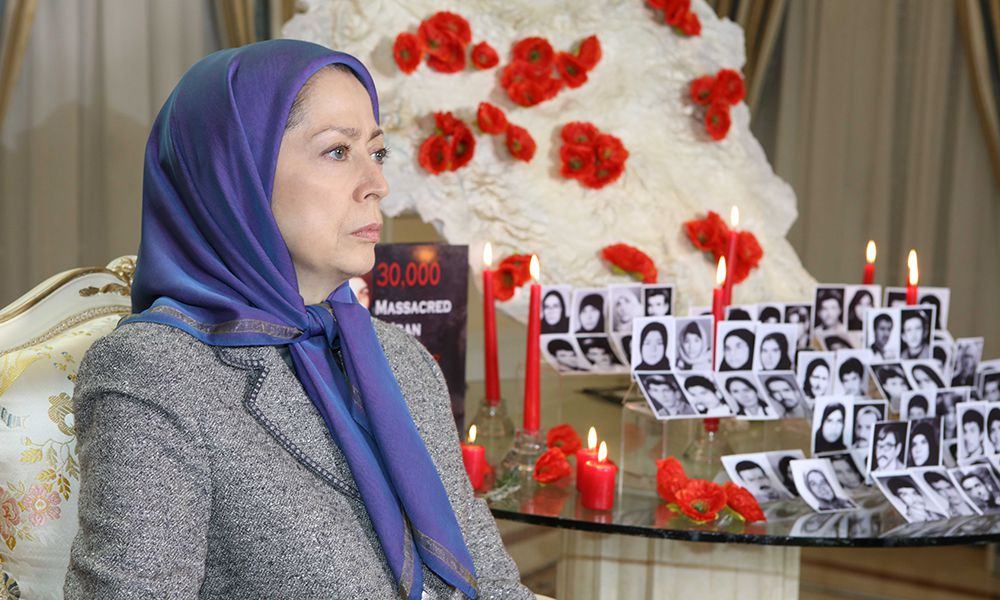 Maryam Rajavi said the recording attested in the strongest possible manner both to the Mojahedin (PMOI/MEK) political prisoners’ rejection of surrender and to their admirable allegiance to, and perseverance in, their commitment to the Iranian people. The recording is also irrefutable evidence that leaders of the mullahs’ regime are responsible for crimes against humanity and the unprecedented genocide, Rajavi said.
Khamenei, whose name is mentioned in the remarks made by the members of the “death commission” in this very meeting, openly declared his support for the mass executions that same year, and in the 28 years since has maintained close ties with the murderous officials who carried them out. He is a mastermind of these atrocities, and must be made to answer to the Iranian people and put on trial, she said.

She said: Mr. Montazeri, himself a founder and ideologue of the principle of velayat-e-faqih (absolute rule of the clergy), emphasizes in the recording, “The Iranian people are repulsed by the velayat-e-faqih” and “later will say that Agha (referring to Khomeini) was bloodthirsty and brutal figure.” His statements attest to the illegitimacy of the ruling regime from the 1980s, to the people’s repugnance towards the velayat-e-faqih, and to the righteousness of the resistance to overthrow that regime.
Maryam Rajavi said: Montazeri’s remarks addressed to the four members of the ‘death commission’ that this massacre was “the greatest crime committed during the Islamic Republic,” and the four officials’ acknowledgement that they were in the process of massacring the Mojahedin political prisoners and planning how to continue this atrocity, leave no room for doubt that the actions of these four men and many other leaders of the regime involved in these atrocities are, by any measure or definition, a crime against humanity.

She added: The international community, therefore, is obligated to bring them to justice. In particular because these four individuals and the others who carried out the massacre of political prisoners referred to in this meeting have, from the beginning of this regime to the present day, held posts at the highest levels of the judicial, political and intelligence apparatuses. At present, Mostafa Pourmohammadi is Hassan Rouhani’s Minister of Justice. Hossein-Ali Nayyeri is the current head of the Supreme Disciplinary Court for Judges. And Ebrahim Raeesi is among the regime’s most senior clerics and the head of the Astan Qods-e Razavi foundation (a multi-billion dollar religious, political and economic conglomerate and one of the most important political and economic powerhouses in the clerical regime).

Maryam Rajavi said: Montazeri’s affirmation that the Intelligence Ministry had for some time been investing in the mass executions and that Ahmad Khomeini (Khomeini’s son) had “been saying for three or four years, ‘The Mojahedin, even the ones who read their newspaper, to the ones who read their magazine, to the ones who read their statements – all of them must be executed’” are further evidence of the reality that the mass executions of 1988 were a premeditated crime against humanity. This rules out absurd assertions by the ruling regime and its toadies, who have tried to relate the executions to the Mojahedin’s Eternal Light military operation and thus blame the organization for this odious crime, she stressed.

The discussion with the members of the death commission took place on August 15, 1988, less than three weeks after the executions had begun. It reaffirms the horrifically high number of execution victims and refutes all of the regime’s deceptive ploys to downplay the extent of this crime. Montazeri in one instance says, “In the (cities’) prisons, they have done everything imaginable… and in Ahwaz it was really horrendous.”

Maryam Rajavi emphasized: Montazeri’s statements, such as his description of the execution of a 15-year-old girl and of a pregnant woman in Isfahan, as well as the statements by the executioners in the meeting reveal the extent of the ruling regime’s ruthlessness and vengeance against the Mojahedin women and their glorious resistance. Addressing these murderers, Montazeri says, “I reminded Khomeini that according to the decrees of most religious scholars, a woman, even if she is a mohareb (enemy of God) must not be executed. But he did not agree, and said that women, too, must be executed.”
In the audio recording, one of the members of the death commission reveals: “As for the girls, God is my witness as far as we could, we tried to bargain with them. I have very strong nerves, but day before yesterday when I saw only one of them ……. I was really devastated. I started pleading with her to just write a couple of lines and we would send her back to the prison.”

Rajavi saluted all the victims of the 1988 massacre, particularly the women and girls who frustrated the regime with their heroic resistance. She said: They paid the price of standing loyal to the cause of freedom and equality. And there is no doubt that tomorrow’s free Iran will indeed blossom from their glorious sacrifice. This is a future which will be unquestionably realized.

She also hailed members and supporters of the Iranian Resistance and all freedom-loving Iranians who have participated for several weeks in worldwide campaigns to honor the 28th anniversary of the massacre of political prisoners in Iran and to spread the message of those gallant freedom fighters both in Iran and abroad.

Maryam Rajavi called on all Iranians, especially Iranian youths, to demand justice for the victims of the 1988 massacre. This, she said, is a nationalist and patriotic duty and part of the Iranian people’s struggle for regime change in Iran and to restore the Iranian people’s right to political determination, a right that the clerical regime attempted to fiercely destroy with the 1988 massacre.

She added: Khamenei and his regime have concealed all the information and details of this crime. They must be compelled to publicly announce the complete list of names of those massacred and the locations of their graves and mass graves, one by one.

Maryam Rajavi emphasized: As far as the Iranian people are concerned, they will never give up on their demand for the prosecution of each and every one of the regime’s leaders involved in this massacre, no matter how many years it takes.

The United Nations and the UN Security Council must make the necessary political and legal arrangements for the international prosecution of the regime’s leaders for this crime against humanity.