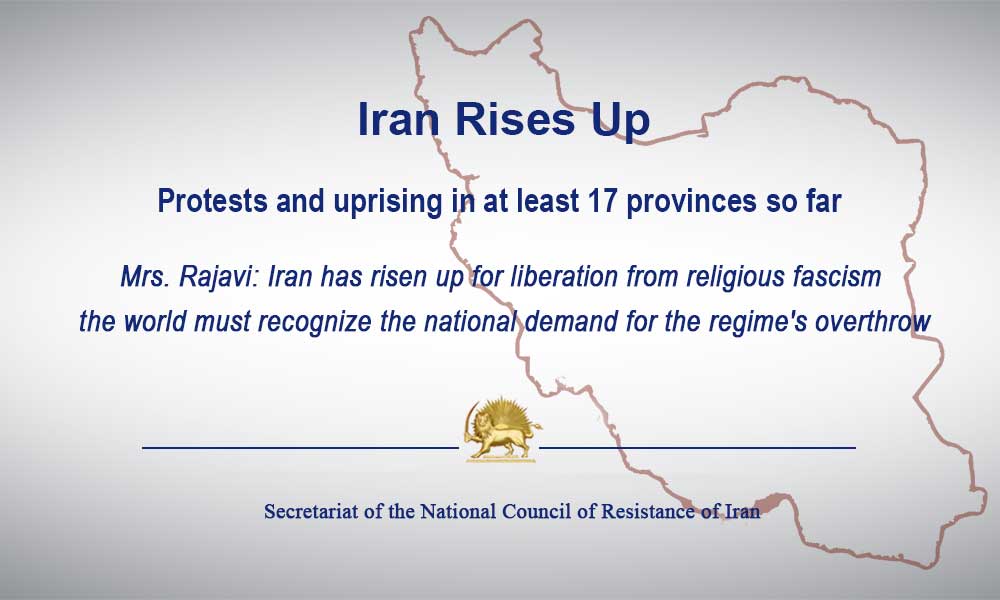 Mrs. Rajavi: Iran has risen up for liberation from religious fascism; the world must recognize the national demand for the regime’s overthrow

The Iranian people’s protests against the religious tyranny ruling Iran has continued for a second consecutive day. It is quickly spreading and so far, in addition to Tehran, 16 other provinces have witnessed protests.

They are chanting: “death to dictator,” “death to the oppressor, be it the Shah or the Leader (Khamenei),” “IRGC commits crimes, the Leader supports them,” “students are awake, they despise Seyyed Ali (Khamenei),” “Today is a day of mourning, the Iranian nation is mourning,” “IRGC rulers, you are ISIS,” “cannons, tanks, firecrackers, mullahs must get lost,” “shame, shame on the incompetent leader,” “the people are begging, the leader lives like God,” “incompetent IRGC is the source of murder,” “I will kill whomever killed my brother,” “my martyred brother, I will avenge your blood,” “students die but will never accept humiliation,” “IRGC cowards are responsible for killing the people,” “Khamenei is a murderer, his rule is illegitimate,” “1,500 died in November,” and “we are warriors, fight and we will fight back.”

In Tehran, people and youth are protesting at Azadi (Freedom) Square, Enqelab (Revolution) Square, and adjacent streets. At Azadi Square, the regime’s masked agents attacked the demonstrators. In order to prevent more people from joining the demonstrations, the regime has closed doors at the Metro at Azadi Square, leaving a large number of people stranded in the station. The suppressive forces have brought in vehicles equipped with 50 caliber machine guns in order to confront the demonstrators. The regime is also trying to disperse protesters by using water cannons.

Mrs. Maryam Rajavi, the President-elect of the National Council of Resistance of Iran (NCRI), praised the arisen people of Iran and said that the people from north to south and from east to west of the country in various cities have rise up in order to liberate the country from the yoke of religious fascism. The time has come for the world community to acknowledge the truth that the ruling religious fascism does not represent the Iranian people and to recognize the national demand of the Iranian people to overthrow this regime.

Secretariat of the National Council of Resistance of Iran
January 12, 2020