Maryam Rajavi: Suppression at home and export of terrorism and war abroad are the two pillars for the clerical regime’s survival 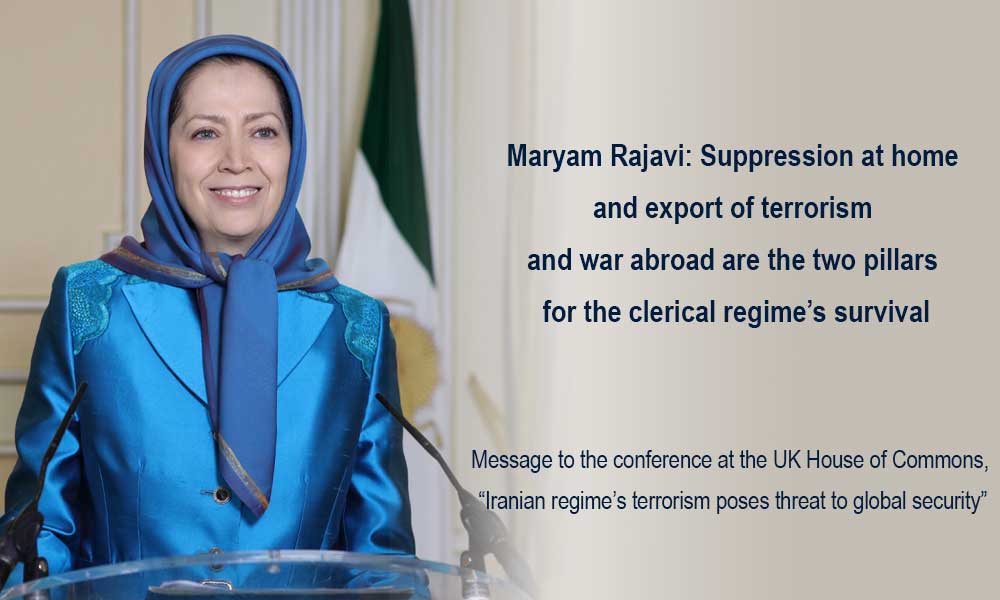 Message to the conference at the UK House of Commons, “Iranian regime’s terrorism poses threat to global security”

Honorable representatives of the people of the U.K. and Ireland,

Sadly, neglecting these vital dimensions has shaped the core of the policies of the European countries towards Iran. As my very dear friend Baroness Boothroyd said, sanctions against the regime and support for the Resistance movement for democracy are an imperative for international security.

Today the people of Iran are surrounded by the regime’s atrocities and destruction.
On the one hand, they face a catastrophic economy. On the other hand, a large segment of the people in Iran are starving. And Iran has one of the highest inflation rates in the world.

On top of all this, Khamenei and the Islamic Revolutionary Guard Corps (IRGC) have plundered the national wealth. This is the Iranian economy’s main problem.
Every year, they steal tens of billions of dollars from the public’s wealth or they move it abroad. In addition, billions of dollars are spent on warmongering, terrorism, as well as on missile and nuclear programs of the mullahs’ regime.
Another issue is the spread of COVID-19 in Iran. Today, the most conservative estimates put the death toll at over 125,000.

Even based on official figures, currently, Iran has the highest number of per capita victims in the world.
The value of assets of the economic institutions controlled by Khamenei amounts to one trillion dollars.
As soon as the coronavirus pandemic hit Iran, the Iranian Resistance issued a call saying that the regime must draw on the assets of these financial institutions to pay for the expenses of workers and the needy for several months so they would not need to go to work where they can be exposed to the virus.

But the mullahs do not use the government’s revenues and resources to contain the spread of the disease. In fact, they use this situation to dishearten the people and silence their protests.
And finally, there is the mullahs’ suppression, torture and execution to preserve their regime.
Today, dozens of political prisoners are on death row. The lives of those arrested during the November 2019 protests are in danger.

Wrestling champion Navid Afkari and Mostafa Salehi were executed after experiencing barbaric torture.
Recently, the mullahs’ Revolutionary Guards tortured young men in the streets before the eyes of the public.
On October 7, the mullahs’ Supreme Court upheld a sentence for cutting the hands of two brothers who were imprisoned in Urmia Prison in northwest Iran.
According to Amnesty international, this “constitutes torture, which is a crime under international law, and an abhorrent assault on human dignity.”

Serious instability of the regime

Recently, after the passing of Persian music maestro Mohammad Reza Shajarian, people chanted in the streets that his spirit will never die; it is, rather, the dictator who must die.

Since December 2017, five major uprisings have erupted against the Iranian regime.
By killing at least 1,500 youths and arresting at least 12,000, Khamenei tried to suppress the November 2019 uprising.

These protests are sparks beneath the ashes and the daily activities of young people and Resistance Units prove this fact.
At the same time, the mullahs’ regime is very unstable.
According to the regime’s Interior Minister, only 2 to 5 percent of the people of Iran participated in the mullahs’ recent parliamentary elections, despite widespread vote rigging.

This explains why the mullahs have resorted to further terrorism abroad, particularly in Europe.
Suppression of the people of Iran on the one hand, and warmongering and export of terrorism on the other, are the two pillars for the regime’s survival.
Another unprecedented development is that an official diplomat of the regime handed over explosives to terrorists to carry out a massive bombing in the heart of Europe. He is now in jail awaiting his trial.

This operation was planned to take place two years ago at the annual gathering of the Iranian Resistance in Paris where hundreds of personalities including dozens of members of parliament and dignitaries from the UK participated.

Recently, news agencies revealed that the regime’s diplomat-terrorist warned Belgium during his interrogations that if he is found guilty, armed groups in Iraq, Lebanon, Yemen, and Syria will retaliate against Belgium.
Indeed, it is the policy of appeasement that has emboldened the mullahs and has given them free reign to conduct terrorism abroad and carry out suppression at home.

Dear friends,
Today, the mullahs are at their weakest possible point. This is why they need to suppress the people of Iran and to export terrorism and war more than any other time in the past.

On behalf of the Iranian Resistance, I call on parliaments in Europe, particularly both legislative chambers in the UK and the parliament of Ireland, to take the lead in adopting a new policy towards Iran.
In brief, this policy includes three elements:
*Human rights for the people of Iran,
*A comprehensive embargo against the religious dictatorship, and
*Recognition of the Iranian people’s Resistance for freedom and democracy.

It is essential that Britain, Ireland and other European countries designate the IRGC as a terrorist group, shut down the regime’s embassies that are centers for terrorist operations, and expel the regime’s agents from European soil.

An independent international mission must investigate the massacre of 30,000 political prisoners in Iran and the slaughter of more than 1,500 protesters by Khamenei during the November 2019 uprising.

The mission must also investigate the condition of prisons and prisoners in Iran, particularly the conditions of political prisoners.

We demand the release of all political prisoners.
The dossier of the massacres of 1988 and the November 2019 uprising must be sent to the UN Security Council.
Impunity for Khamenei and other leaders of this regime should no longer be tolerated. They must face Justice.