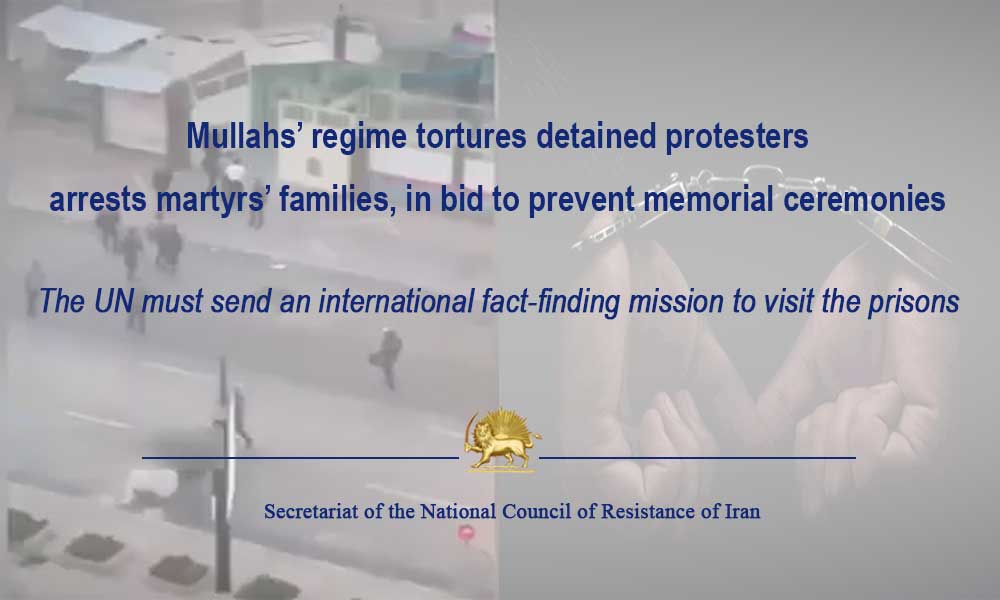 Reports received from inside Iran paint a grim picture of brutal torture in prisons in Tehran and other cities in Iran. The conditions in prisons such as Fashfouyeh, Evin, and Gohardasht are as critical based on these reports. Iranians traditionally mourn their dead 40 days after their passing. The Iranian regime is desperately attempting to prevent this memorial for the protesters that it killed during the November uprising that swept the country by arresting and systematically intimidating the families of the victims. The People’s Mojahedin Organization of Iran (PMOI/MEK) announced,

1. The regime is torturing supporters of the movement into forced confessions. The victims are being pressured to say they received money from the MEK to set fire to banks, or that the MEK ordered them to fire on innocent protesters. The prison torturers are demanding the victims repeat lies that the MEK is funded by Israel and Saudi Arabia.
2. Reports indicate that some of the prisoners have already died under torture and others have been forcefully “disappeared” by the regime.
3. There are many young students under 13 years of age among the prisoners.
4. Some prisoners are said to have lost more than 20 kg during the past few weeks due to torture. Torture scars can be seen on their bodies.
5. A few persons freed under excessive bail also have torture scars and they have been threatened with heavy sentences if they say a word about what they saw in the prisons.
6. Prisoners are cramped into tiny cells. In Fashfouyeh prison, about 40 to 50 prisoners are forced to share a 10-12 square meter cell. There is no opportunity for rest or sleep and prisoners are forced to stand most of the time. Each person can only rest for 30 to 60 minutes only.
7. There is no sign of any sanitary necessities or minimum living needs. There are no blankets or pillows. Prisoners use one or two cups in each cell to drink water.
The ministry of intelligence is nevertheless terrified of allowing the families to hold any memorials for the victims and has arrested the parents of Pouya Bakhtiari in recent days. The family had been threatened by authorities not to hold any memorial for their slain son.
The Iranian Resistance had announced earlier that the regime’s supreme leader, Ali Khamenei had ordered the crackdown that resulted in the killing of over 1500 protesters, injury of over 4000, and the arrest of over 12,000.

The massacre of 1500 protesters, torture and killing of prisoners are examples of crimes against humanity and the international community must act to stop it. This bloody regime must be isolated from the community of nations.
Mrs. Maryam Rajavi, the President-elect of the National Council of Resistance of Iran (NCRI), once again called on the United Nations to send an international fact-finding mission to visit the prisons and meet with the detained in Iran without any delay.

Secretariat of the National Council of Resistance of Iran
December 24, 2019