Maryam Rajavi: Time to end three decades of impunity for the clerical regime’s leaders in Iran 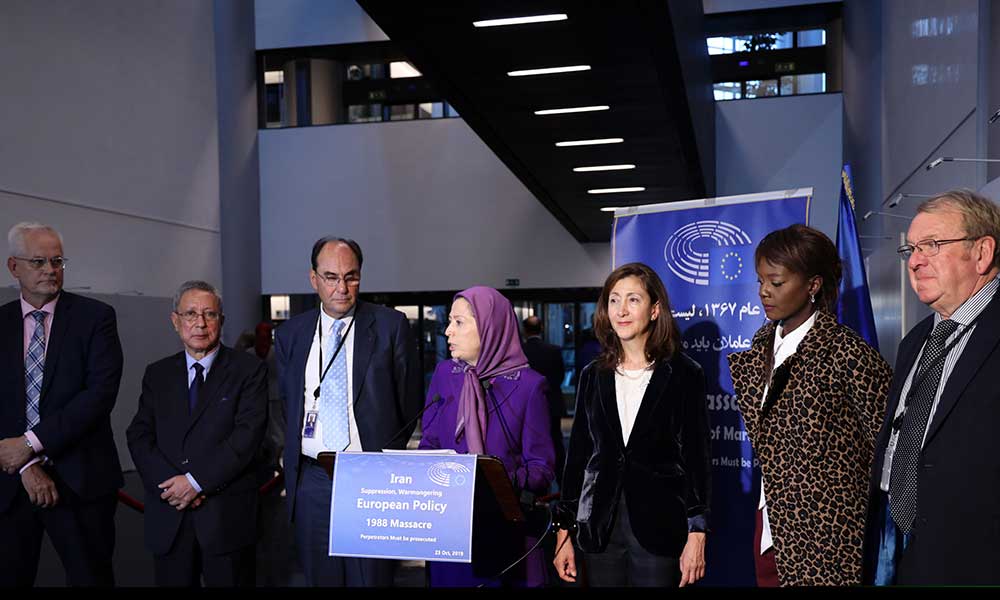 Today, I have come to present to the representatives of the people of Europe the list of more than 5,000 victims of the massacre of political prisoners in 1988 in Iran.

Altogether, 30,000 political prisoners were executed over a short period of time by Khomeini’s fatwa.

The book contains the locations of the mass graves of the victims of the 1988 massacre in 36 cities, names of members of 35 death commissions, and names of 110 cities where the massacre was carried out.

Of the victims listed in this book whose ages at the time of execution are known, 42 were under 18.

The majority of the victims of the massacre were between 20 and 30 years old. Therefore, a considerable number of them were under 18 at the time of arrest.

The list also contains names of victims from all Iranian ethnic groups. The Baluchis, Arabs, Kurds, Turks, Turkomans, Bakhtiaries, Lors, and Qashqaiies carry deep scars from the crimes of the mullahs’ religious tyranny.

A considerable portion of the data compiled in this book has been collected by the Call-for-Justice Movement in Iran, particularly over the past three years when the movement expanded all across the country.

The book shows that the clerical regime’s leaders, including Ali Khamenei, the mullahs’ supreme leader; Ibrahim Raisi, head of the Judiciary; Alireza Avayie, the Minister of Justice, Mohammad Moghiseh, presiding judge of the 28th Branch of Tehran’s Revolutionary Court, and many members of the mullahs’ parliament, the Assembly of Experts, the State Exigency Council and the Judiciary, were either directly involved in this great crime against humanity or condoned it.

This book also contains 20 examples of explicit and official admissions by the perpetrators of the 1988 massacre who currently hold positions in the ruling regime.

As explained in the book, one of the most adverse consequences of the policy appeasement has been the impunity enjoyed by these murderers.

Granting immunity to the regime’s leaders has given them a chance to conceal this crime according to a well-planned scheme similar to the manner in which they carried out the massacre of political prisoners.

The highest officials responsible for the 1988 massacre and members of the Death Commissions are among senior officials of the current regime.

Such immunity has emboldened the regime to export it terrorism and warmongering.

The time has come for the international community to end three decades of impunity for the leaders of the clerical regime and to hold them to account for their crimes.

The dossier on human rights violations in Iran, particularly the 1988 massacre, must be referred to the UN Security Council.

Khamenei and other leaders of the regime must face justice for committing crimes against humanity.

And the time has come for the world to recognize the right of the people of Iran to resist and topple the religious fascism ruling Iran.

We will not give up until the details of this great crime against humanity are brought to light, until the locations of the graves of all our sisters and brothers are found, until each and every one of the ruling executioners are prosecuted and face justice, and until the regime of mass murderers is overthrown by the people of Iran, their resistance units and their National Liberation Army of Iran.