Maryam Rajavi: With the uprisings of the people of the Middle East and the elimination of Qasem Soleimani, the strategy of exporting fundamentalism and terrorism is disintegrating 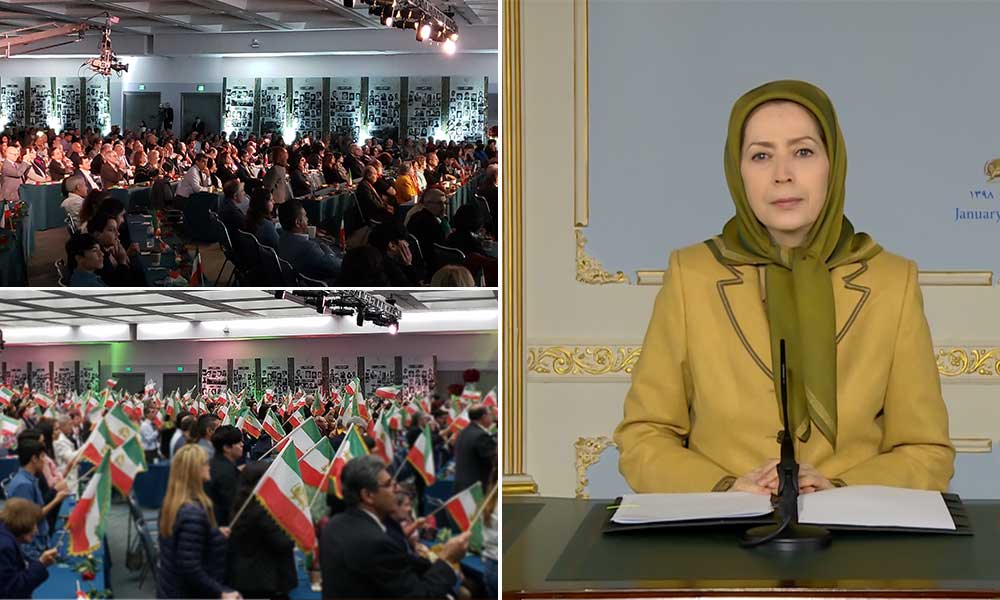 Distinguished personalities, supporters of the Iranian Resistance and the Iranian people’s uprising,
Rep. Patrick Kennedy, General Conway, Senator Torricelli, Ambassador Bloomfield, Prof. Sheehan,
My fellow compatriots, who have gathered to convey the voice of the Iran uprising and the resistance units. Hail to all of you.
With the advent of the third decade of the 21st Century, the world is looking with hope at the uprising in Iran and the bright prospects of a free and democratic Iran.
Over the past few weeks, the moribund religious tyranny has received serious and irreparable blows.
Topping them all was the Iran uprising in November that brought the regime’s overthrow within reach, particularly since the resistance units demonstrated, both during the uprising and in subsequent days and weeks, that they hold the initiative and are challenging the regime and its repressive forces everywhere.
The elimination of the terrorist Quds Force commander, Qasem Soleimani, a few weeks after the November uprising delivered a crushing blow to the strategy of export of fundamentalism and terrorism.
These developments have determined the trend of future developments in Iran.
The November uprising confirmed that the uprising by rebellious youths and the army of the deprived and the destitute, who rose up in December 2017, has continued and will forge ahead until it topples the religious tyranny in its entirety.
The blazing uprising and subsequent developments proved that despite the regime’s bloody crackdown, our society has elevated its high morale and fighting spirit, and is heading towards yet another uprising.
As the Iranian Resistance’s Leader Massoud Rajavi said, “The triumphant strategy of the Liberation Army was tested in the resistance units, and in the rebellious cities and districts.”

The Iranian Resistance emerged proud. The National Liberation Army, combined with the young generation, rebellious divisions, and the volcano of the oppressed and the unemployed, reached the peak.
Today, every Iranian, in the U.S. and around the world, hears the sound of victory from rebellious cities in Shiraz, Mahshahr, Behbahan, Isfahan, Marivan, Kermanshah, Islamshahr, Quds and Shahriar.

The voice of more than 1,500 slain children of the people of Iran echoes nationwide. They committed no offense other than demanding their rights and freedoms, but were ruthlessly targeted by Khamenei’s IRGC. As the UN High Commissioner for Human Rights said, they were shot directly in the face, chest and vital organs, which pointed to deliberate mass murder by a regime terrified of the specter of being overthrown at the hands of our people.
The names of all these blood-drenched martyrs will pierce through the walls of repression, and the cries of 12,000 captives under torture will send the message that the people of Iran and their rebellious youth are determined to bring down the mullahs’ religious dictatorship and establish freedom and democracy. This uprising will forge ahead until the glorious victory day.
Today, Khamenei is engulfed by the crises of being overthrown.
As a hollow show of force, he indiscriminately launches missiles. But feels free to fire on the people of Iran in the air and on the ground. On Wednesday, it shot down a Ukrainian airliner over Tehran, killing 176 innocent passengers. As always, he took revenge from the people of Iran and simultaneously threatened the Mujahedin-e Khalq (PMOI/MEK) in Albania.
On January 8, he lashed out at its existential threat, namely the MEK for its role in the uprising in 191 cities following the fuel price hike. He also assailed Albania.
Khamenei said the MEK had planned again what we saw in the petrol crisis. He warned that “they will do whatever they can.”
Yes, the Iranian people and Resistance are determined to use all their might to overthrow this evil regime.

Fellow compatriots,
Distinguished personalities,
In circumstances where our society remains simmering owing to the sacrifice of more than 1,500 innocent young people across our homeland, the U.S. elimination of the most important commander of Khamenei’s murderous Revolutionary Guards was an irreparable blow to the regime’s top brass.
It was the Iranian people’s November uprising and the uprisings by the people of the Middle East, particularly the relentless sacrifices made by the people of Iraq, which set the stage for this blow.
The regime resorted to foreign crises to evade the consequences of the November uprising, but it ended up setting a fire which quickly eliminated their own leaders.

Indeed, the roaring river of the blood of the martyrs of the November uprising is strangling the regime. The agony and pain of the parents of 1,500 martyrs have encircled the ruling murderers.
The regime had not had anyone like terror master Soleimani over the past 40 years.
Single-handedly, he embodied the depravity and ruthlessness of the mullahs’ regime. All of the regime’s internal factions were united in supporting him.
But how did this murderous criminal become the regime’s indisputable number 2?
During his entire career, he ruthlessly spilled blood and murdered people.
You remember the massacre in Ashraf on September 1, 2013, with the barbaric executions of 52 MEK members and taking another 7 members hostage. The massacre had been planned and directed by this executioner.
Three days after the massacre, he attended the Assembly of Experts session to report on his crime. He said this massacre was more significant than the regime’s military operation against the MEK in 1988.
Before and after this massacre, he was the main official responsible for more than 90 terrorist operations against the MEK and the residents of Ashraf in Iraq, from the missile attack on Fa’ezeh basecamp on June 22, 1997, to the vicious rocket attack on Camp Liberty on October 29, 2015 which led to the death of 24 MEK members. The slaughter of MEK on July 28 and 29, 2009, where 13 persons were shot and axed to death, and the attack of April 8, 2011, when they ran over MEK members by Humvees and shot them at point blank range, killing 36 residents, were carried out under his direction.
He was truly the embodiment of the Velayat-e Faqih dictatorship. His death signals the end of the regime. Soleimani was the architect of the regime’s strategy of export of fundamentalism and terrorism.

He murdered the people of Syria and Iraq. He commanded and directed the clerical regime’s genocide and devastation in Syria and Iraq, taking hostage the political and social life of the people of Lebanon, and fomenting the war in Yemen.
Today, the strategy of exporting fundamentalism and terrorism is disintegrating altogether as the people of the Middle East are rising up. To this end, the elimination of the commander of the terrorist Quds Force represents a turning point.
For this reason, the political groups and parties, Iranian and non-Iranian, who benefit from the continued rule of the mullahs’ regime are reeling over the Soleimani’s termination.

They speak of the violation of international law and human rights and of a threat to peace, but they do not say why they did not mention human rights when more than 1,500 young people and teenagers perished just a few weeks ago by the murderous Ali Khamenei and Qasem Soleimani. Are the 12,000 detainees under torture not entitled to human rights?
How about the regime’s destructive meddling in Middle Eastern countries? Is it not contrary to international laws and violation of national sovereignties of those countries?

Are the young Iraqis, who demand the expulsion of the mullahs and the IRGC from Iraq, not entitled to human rights?
Did the repeated massacre of the MEK in Ashraf and Liberty carried out on the orders of Khamenei and Soleimani, not violate human rights?
The reality is that they neither seek peace nor human rights. They are worried about the downfall of the mullahs’ regime in Iran.
As Massoud Rajavi, said: “Soleimani’s elimination drew the lines in the region between friends and foes. Those who are with the regime and with Soleimani, reveal their reactionary nature. They are the dying forces.”

Fellow compatriots,
Dear supporters of the Iranian Resistance,
Honorable dignitaries,
The countdown for the clerical regime has begun.
The peoples of Iran, Iraq, and Lebanon have encircled the mullahs’ religious dictatorship.
Today, one can see the dawn of a free Iran in the unrelenting uprisings and struggle of resistance units.
We seek to establish a democratic, free and progressive Iran based on people’s free choice and suffrage, based on the separation of religion and state, based on pluralism, gender equality, autonomy of the oppressed ethnic groups, and abolition of the death penalty.
The international community must end its silence and inaction. The UN Security Council must declare the clerical regime’s leaders as perpetrators of crimes against humanity for all this suppression and bloodshed. They must face justice. The United Nations must immediately send fact-finding missions to Iran to investigate the cases of those killed, wounded, and imprisoned.

The world must recognize the legitimacy of the resistance and struggle of Iran’s rebellious youth against the murderous Revolutionary Guards. They must recognize the struggle of the people of Iran to overthrow the regime.
I call upon each and every one of you, Iranians residing in the U.S., to aid the uprising in Iran and assist the rebellious youth and resistance units. You must enlist the support of the people of America and their elected representatives and statesmen for the Iranian people and Resistance to overthrow this inhuman regime.

There is no other way with this regime. This is the only way the world can get rid of terrorism, wars and religious fundamentalism in that part of the world.
It is the most urgent duty of all honorable and freedom-loving Iranians in the U.S. and in any other country to draw the attention of international community to this basic fact.
Mahatma Gandhi, leader of India’s independence movement, once said, “There have been tyrants and murderers, and for a time they can seem invincible, but in the end they always fall.”
Iran will be free. This is the verdict of history and the logic of evolution. Be certain of it and add to your resolve to make it happen.

God bless the martyrs,
Hail to freedom,
Hail to the Liberation Army,
And hail to you all.