Maryam Rajavi on the World Day against the Death Penalty: Thousands of executions under Rouhani rebut claims of moderation in the clerical regime 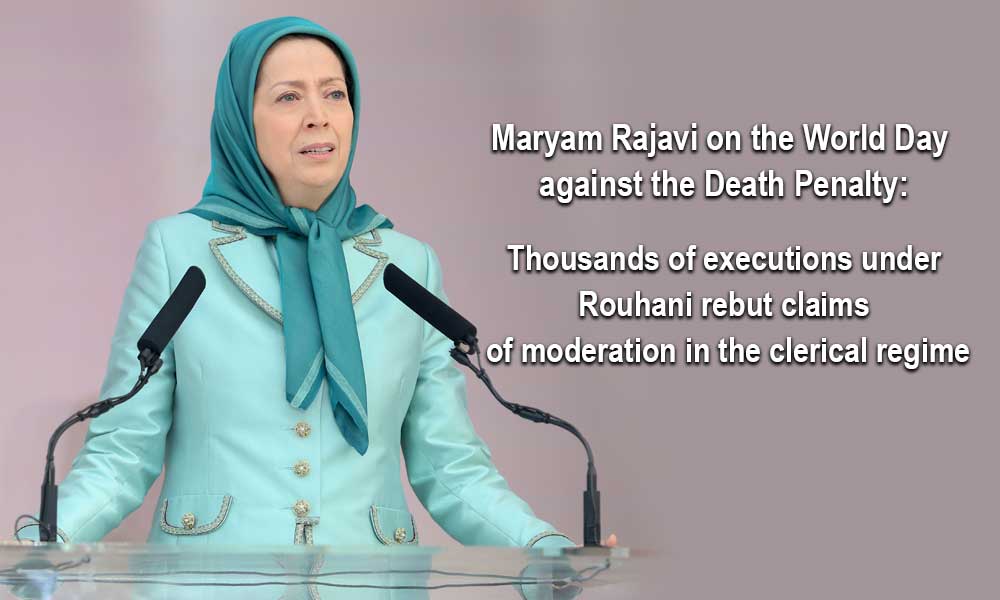 Their sacrifice was not only significant in exposing the mullahs’ religious dictatorship as a regime of executions and slaughter, but an effective historical element contributing to the abolition of the death penalty in Iran and the world. Without doubt, when the clerical regime is overthrown, the death penalty will no longer enjoy a mainstay in the world.

Over the past 40 years, the cycle of executions of youths in Iran actually perpetuated the rule of the mullahs’ religious tyranny. Such bloody insanity has created an atmosphere of suppression and terror crucial to preserving the mullahs’ decadent regime, on the one hand. And on the other, it provided a mechanism for training ruthless mercenaries to take on the rule. Their field work included interrogation and torture of victims, laying the hanging noose around their necks or giving them the coup de grace. Having passed this course, Ebrahim Raisi, an executioner involved in the 1988 massacre, has now become the head of the Judiciary.

International bodies have reported 253 executions in Iran in 2018. This is but a small part of the actual number, since many of the executions in Iran are carried out secretly.
There were at least four male and female juveniles among those executed for the crime they had committed as minors. They reached 18 while they were on the death row.

During the same period, the number of political executions has increased, remarkably.
Last June, in a criminal plot by prison authorities, a political prisoner was viciously murdered in Fashafouyeh (Greater Tehran) Prison. In July and August, three prisoners were executed in Dezful and Kazerun. And last November, Amnesty International reported the secret executions of 22 Arab compatriots.

Directly related to the regime’s deadly impasse and their fearful efforts to contain Iran’s volatile society, these incidents make it more imperative for the United Nations and international human rights bodies to investigate the conditions of political prisoners in Iran. They must not allow the clerical regime to have a free hand in jeopardizing the lives of political prisoners to counter the protest movement.
Flagrant violations of human rights in Iran, including incessant executions, by the clerical regime, are carried out to a large extent under the auspices of the policy of appeasement and silence of western governments. Since 2013 when Rouhani took office, 4,000 have been executed.

This is just part of the bleak record of a mullah who has been projected as a so-called moderate by the regime’s apologists. Behind this smokescreen, these governments seek to continue their policy of protecting the religious fascism and striking their commercial and political deals with them. Of course, by turning a blind eye on human rights abuses and at the cost of suffering and lives of the people of Iran. Appeasement is what the clerical regime relies upon to export their terrorism by taking advantage of their diplomatic facilities on European soil and through warmongering in the region. These include attacks on vessels in international waters, on neighboring countries’ oil facilities, or by carrying out terrorist operations in other countries.

To stand up to a regime which is the main threat to global peace and security, all governments need to make their ties and commerce with the clerical regime contingent on end to executions and torture in Iran.
The dossier on human rights abuses and massacre of political prisoners in Iran must be referred to the UN Security Council and the International Tribunal.

The United Nations must pressure the clerical regime to admit to Iran their fact-finding delegation to visit prisons where political prisoners are detained.
And the international community must recognize the right of the people of Iran to a sovereign republic.
Today, two-thirds of the world, i.e. 142 countries, have abolished the death penalty or refrained from implementing it. Under the rule of the mullahs, however, Iran ranks first in per capita executions. So long as the clerical regime has not been overthrown, it will not let up on executions and torture. Nor will it let up on misogyny, religious discrimination, terrorism and warmongering.
Our resistance movement seeks to establish a society where there is no torture or executions, a republic based on freedom, democracy and separation of religion and state which will cherish human rights and gender equality as its highest principles.