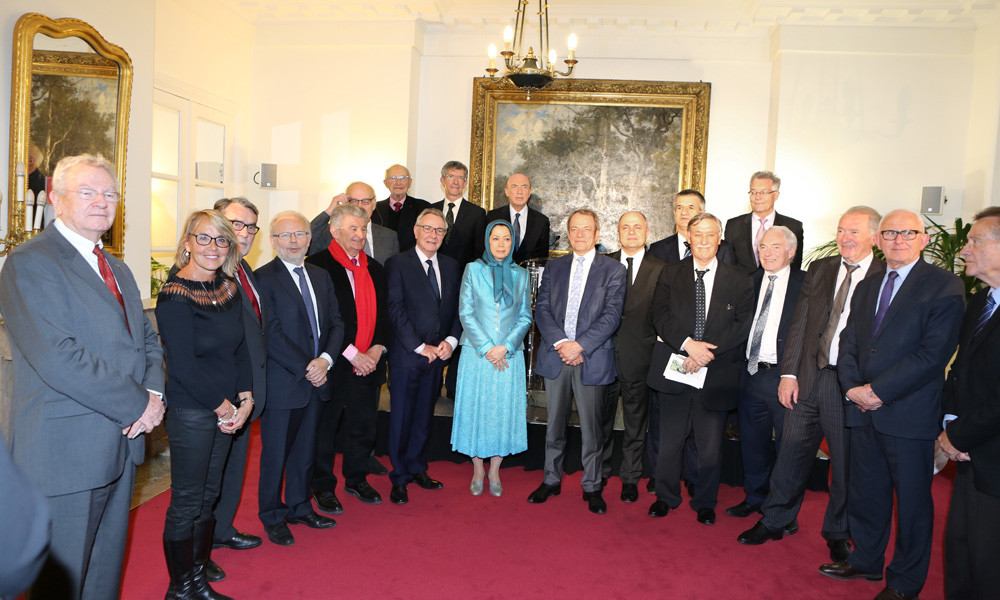 Maryam Rajavi: The people of Iran celebrate Nowruz more enthusiastically than ever; their message is a strong desire for regime change in Iran.

On April 5, 2016, a meeting was held at the French National Assembly featuring Mr. Bruno Le Roux, head of the socialist group in the National Assembly as well as other French legislators. The Iranian Resistance’s President-elect Maryam Rajavi declared:
Dear friends in the French houses of parliament,
Honorable supporters of the Iranian Resistance!
In the beginning of the Iranian New Year concurrent with the advent of spring, I wish you, your families and the great nation of France, a year filled with progress and advancements.

The New Year’s celebration or Nowruz has been the most important feast of Iranians for thousands of years. Nowruz literally means the renewal of the nature, time and year, and the people’s hearts, visions and fate. In fact, this makes up part of the Iranian people’s outlook on the world that does not tolerate the status quo and calls for change for better.

The mullahs’ religious fascism has not been able for the past 37 years to prevent the celebration of Nowruz. And Iranians have celebrated Nowruz more enthusiastically than ever with their message and demand of regime change and demise of the clerical regime. This has been the Iranian people’s consistent desire over the past year demonstrated in 6500 acts of protests.Rouhani bragged about bringing about moderation, instead he brought about more executions in Iran and more war in Syria.

Now, he wants to spread the mullahs’ repression to Europe. Just a few days ago, he cancelled his visit to Austria because the Austrian Government turned down the Iranian regime’s demand to prevent the demonstrations of supporters of the Iranian Resistance. Rouhani fears public expression of outrage over his visit similar to what happened in France.

The mullahs said people would have greater purchasing power after the nuclear accord, but the assets released after lifting of the sanctions went to the coffers of the Revolutionary Guards Corps (IRGC) and was spent on the wars in Yemen, Syria and Iraq, leaving the people of Iran ever more destitute.
Today, the regime has at least 60,000 troops and paramilitary forces in Syria. The mullahs detest the present ceasefire and seek to keep Bashar Assad in power by destroying the opposition. However, a victory in Syria will no longer be conceivable for the mullahs.
Contrary to some claims, the mullahs’ meddling in Syria does not signal their power. Rather, the mullahs need to preserve Assad’s rule for their own survival because presently, they are in their weakest ever position.
On the other hand, the regime would have never given up its nuclear program if a deep crisis was not at work.
After signing the nuclear agreement, the situation has become even worse for the regime. The society is simmering with discontent and the situation is very volatile. The bankrupt government was not able to pay the salaries of its own employees last month, while the ruling clique is badly divided and engulfed in feuding.

The mullahs hoped to cover up their internal crises to some extent by the parliamentary elections, but the outcome proved to be otherwise.
First of all, the people of Iran and the society in general boycotted the elections.
Secondly, the elections upset the regime’s internal balance against Khamenei’s interests.
The regime’s test firing of the ballistic missiles, in violation of the UN Security Council resolutions, on the one hand indicates the regime’s pursuit of the same policies and on the other, the mullahs’ intention to conceal their weakness.
In these circumstances, a democratic alternative to the regime bears even greater importance compared to the past.

This is why the Iranian regime fired 80 rockets on Camp Liberty last October 29th. Twenty-four people lost their lives in that attack, but the regime had intended to massacre everyone. It seems that the events of the past several months have very well disillusioned those who had expected change in the regime’s behavior after the nuclear agreement.
Back to Nowruz, I would like to add that another message of this great feast is for those who prepare the coming of spring, praising them. And you, dear friends who have defended freedom and human rights for the people of Iran and supported members of the Iranian Resistance all around world, from Iran to Camp Liberty and Tirana, you are the harbingers of Nowruz. I sincerely do appreciate your generous and courageous endeavors.

Terrorism and barbarity made our lives bitter during Nowruz. However, the crimes committed against humanity in Brussels only strengthened our resolve to combat fundamentalism and terrorism under the banner of Islam, ominous phenomena that originated several decades ago in the mullahs-ruled Tehran and today, cast their shadow on large parts of the world.
I hope the Iranian New Year would be a year of progress for Europe and France in particular. I wish it would be a year devoid of bitter incidents such as the November 13th tragedy. I wish that France would succeed in its battle and overcome this calamity. And finally, I wish that the New Year would be a year filled with successes for the Parliamentary Committee for a Democratic Iran.
I thank you all very much and wish you a very happy Iranian New Year.