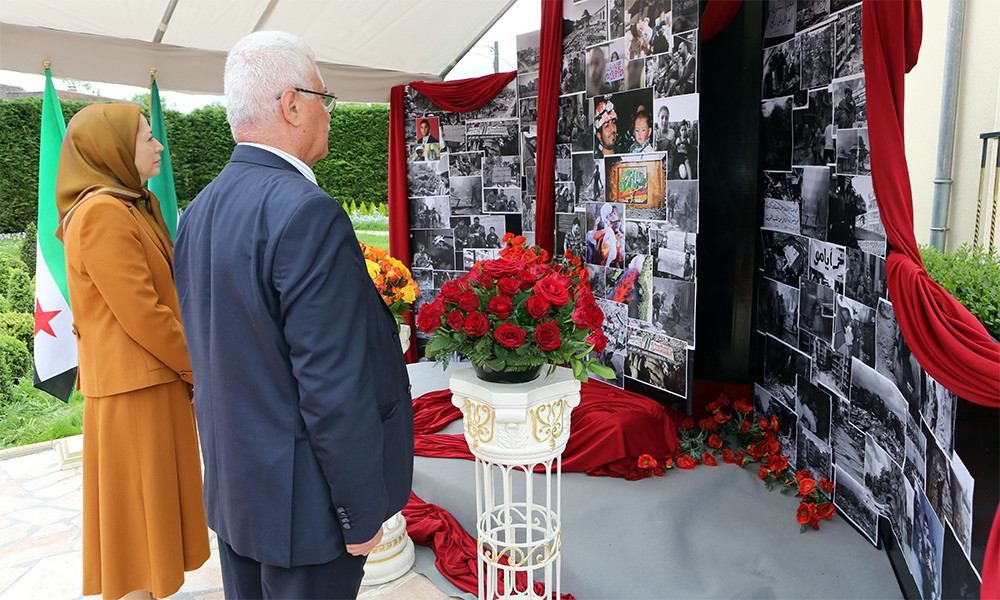 Maryam Rajavi and Mr. Sabra initially laid flowers and paid tribute to the memorial of martyrs of the Syrian Revolution and the heroic resistance of the people of Aleppo.

Mr. Sabra said the peoples of Syria and Iran are fighting a common battle to topple two terrorist and murderous regimes in Damascus and Tehran. He reiterated: The goals of the Iranian Resistance and the Syrian Revolution are common, our enemy is common and the battle for freedom and dignity is also a common battle.

Mr. Sabra added: Fifty years of struggle by the People’s Mojahedin Organization of Iran and the Iranian Resistance against the mullahs’ regime bear numerous lessons and useful experiences for confronting and removing two tyrannical regimes and merit great respect and admiration.

It has been five years that Bashar Assad and the Iranian regime have not hesitated from committing any crime against the people of Syria, Mr. Sabra said. They have tortured prisoners to death, massacred innocent people by chemical weapons and barrel bombs, starved people and kept them in the cold, but the people of Syria have never surrendered and they will never do so. They are going to continue their struggle until Bashar Assad is toppled. The Syrian Revolution looks forward to future and to victory and it never looks back.

Mr. Sabra added: The Assad regime, Iranian Revolutionary Guards and Iranian backed militias have encircled and bombed Darayya, near Damascus, for four years. The population of this city has dropped from 400,000 to 8,000 people but they have not let their city fall to the enemy. When there was a brief ceasefire, the people of this city (like other cities under the control of Revolution forces) came out to the streets and chanted, “The people want the overthrow of the (Assad) regime.” I contacted Darayya’s City Council just yesterday and they emphasized that we should not show any weakness in the negotiations. They told us: “Don’t think of us or the blockade. Think of the Revolution and our people’s destiny.”

Maryam Rajavi lauded Mr. Sabra’s firm positions against Bashar Assad’s dictatorship. She said: The Iranian Resistance feels the pain and suffering of the people of Syria and is always by your side. We see your victory as the victory of our own people and Resistance. We deeply understand the meaning of steadfastness, endurance and resistance of the Syrian people and Revolution. The steadfastness of Aleppo has been heroic and a cause of pride for humanity. It is an eternal and unforgettable example of resistance, endurance and steadfastness of a nation in achieving freedom.

Maryam Rajavi added: The solidarity between the Syrian people and Revolution and the Iranian people and Resistance facilitates and expedites the overthrow of the two dictatorships in Damascus and Tehran and saves numerous lives.

Noting the heavy setbacks recently suffered by the IRGC and Iranian backed militia in Aleppo,Maryam Rajavi reiterated: The Iranian regime is going through one of the most perilous periods of its existence and is doomed to suffer a wretched defeat at the hands of the Syrian people and Revolution.

Dr. Saleh Rajavi, the NCRI representative in France, was also present in this meeting.