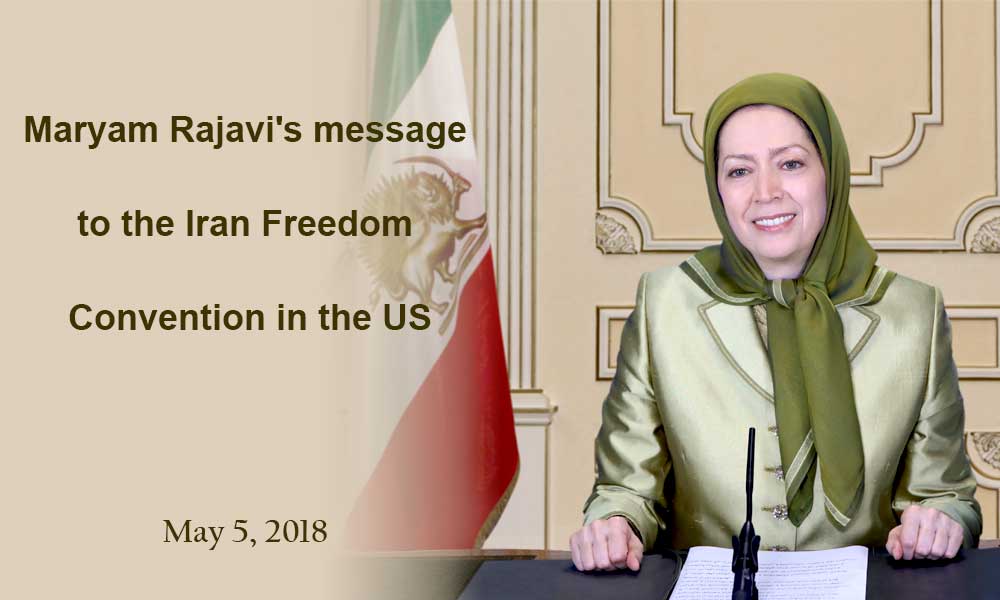 From afar, but among you in spirit, I salute you– all of you who have come to Washington from different states across America–on your magnificent convention. You demonstrate to the world the Iranian people’s resolve to establish a free, democratic, and non-nuclear Iran.

At a time when a widespread, far-reaching protest movement, led by Iran’s valiant women, youth, and rebel units, has hemmed in the ruling theocracy, I would like to take this opportunity to say a few things about the correct policy on Iran.

2. We emphatically urge the world community not to remain silent vis-à-vis the persistent crimes perpetrated by a regime which holds the world record for per capita executions. We call on them, by adopting punitive measures, to compel the mullahs to release those arrested in the recent uprisings and protests, including hundreds of our Arab compatriots in Khuzestan Province and a large number of Kurds in western Iran, and to end the barbaric persecution of farmers in Isfahan.

3. Today, the leaders of the western world have pinpointed the fundamental flaws and ineffectiveness of the Iran nuclear deal. This vindicates the position taken by the Iranian Resistance. Hours after the signing of the JCPOA on July 14, 2015, I declared on behalf of the Iranian Resistance, that the deal had provided “unwarranted concessions to the mullahs’ regime.” I also emphasized “evicting the regime from the Middle East and preventing its regional meddling… is a fundamental principle that needs to be included in any agreement.”

Regarding the billions provided to the regime in the framework of this deal, I said that the money poured into the regime’s coffers must be placed under strict United Nations monitoring to ensure that it addresses the Iranian people’s urgent needs, especially the unpaid, meager salaries of workers, teachers, and nurses, and is used to provide food and medicine to citizens. Otherwise, Khamenei will use these funds to further the regime’s policy of export of terrorism and fundamentalism in Syria, Yemen and Lebanon.” And I also underscored the reality that “Any agreement that disregards and fails to underscore the Iranian people’s human rights will only embolden the regime in its suppression, relentless executions, and abuse of the rights of the Iranian people.”

4. The experience of the past three years has confirmed that the mullahs took advantage of the concessions in the JCPOA to suppress the people of Iran and massacre the people of Syria. As such, we emphatically demand that western countries adopt a policy that would eliminate the entire infrastructure of the regime’s nuclear program and, through unconditional inspections, prevent, once and for all, the regime from engaging in any nuclear-related activity, testing or research, including enrichment.

5. Dismantling the regime’s nuclear weapons and ballistic missile programs, expelling the Revolutionary Guards from other countries in the region, and compelling the regime to stop torture and execution should be addressed in a wholistic approach. Western countries must not ignore any of these aspects.

6. To contain the criminal and belligerent activities of the mullahs’ theocracy, we emphasize the need to cut off access by the regime, especially the Revolutionary Guards, to the international banking system.

7. Recognizing the National Council of Resistance of Iran as the democratic alternative to the clerical regime is a necessary step to compensate for the appeasement policy pursued in recent decades that prolonged the rule of the mullahs.

Supporters of the Resistance, dear friends,

Rise up in response to this urgent duty, by informing the Iranian exile community, by neutralizing the lobby and proponents of the religious dictatorship, and by stepping up your activities to convey the cries of the Iranian people to the peoples of the world.

Our time is a time for change, and any step in this direction is a step toward the victory of freedom and the liberation of our enchained Iran.