Message of Maryam Rajavi on the World Day Against Death Penalty: “Rise and stand up to the policy of executions by the ruling religious dictatorship” 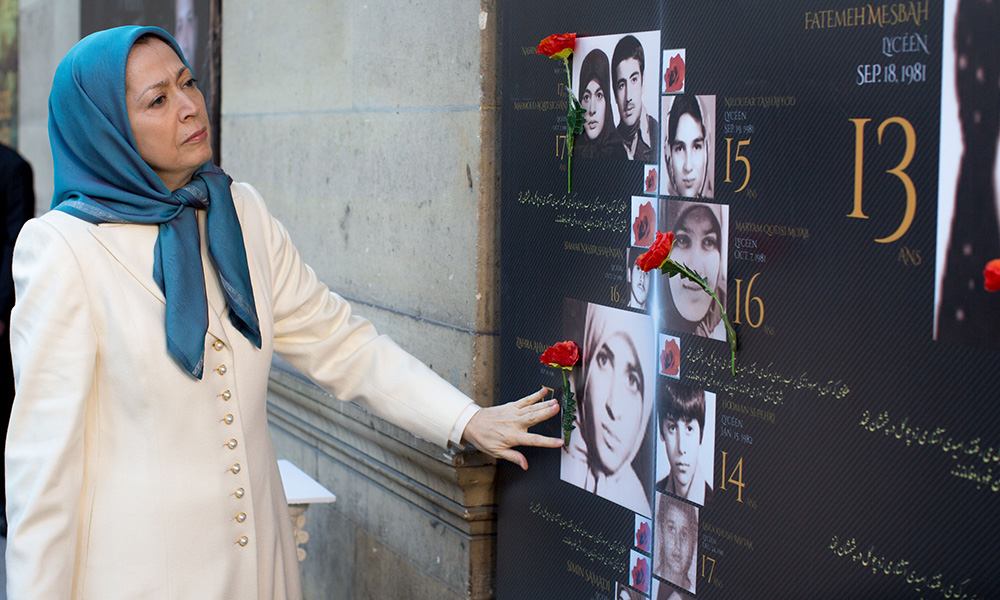 More than any other party, the World Day Against the Death Penalty targets the Iranian regime that has so far executed 120,000 of Iran’s children, including the 30,000 political prisoners who were serving their prison sentences, but were hanged just for their political beliefs. According to Khomeini’s fatwa, any prisoner who continued to adhere to the People’s Mojahedin Organization of Iran, had to be executed.
The number of executions including political executions in Iran over the past one year exceed the number of executions carried out in most of the years of Khamenei’s rule.
The mass execution of 25 Sunni Kurds on August 2, 2016, and the executions of three Arab political prisoner on August 17, 2016, are just to name a few examples.
Meanwhile the trend of executions on other charges continues incessantly.
A member of the Legal and Judicial Committee in the regime’s parliament revealed in August that, “Presently, there are 4500 undecided prisoners on death row.”
According to the report by the UN Special Rapporteur on human rights in Iran, Ahmad Shahid, nearly 1,000 people were executed last year in Iran.
While the majority of these executions are carried out under the pretext of combatting drug trafficking, there have been numerous reports indicating that the Iranian Revolutionary Guards Corps (IRGC) has had a significant role in the smuggling and distribution of narcotic drugs within Iran. So, those who are executed on this charge, are victimized twice, once by repression and twice by the regime’s criminal activities.
In recent years, officials of the governments of Azerbaijan , Afghanistan , and Nigeria uncovered the involvement of the IRGC and the Iranian regime’s security forces in drug smuggling, when the US Treasury Department had already blacklisted one of the commanders of the terrorist Quds Force for his involvement in drug dealing and smuggling and added him to the list of people who had been sanctioned and were liable to prosecution.
Then in March 2015, Rouhani’s Interior Minister Rahmani Fazli admitted, “Undoubtedly, part of the dirty money of drug trafficking gets funneled into the country’s politics, elections and transfer of power.”
Reports confirm that the IRGC makes exorbitant profits out of its drug deals. Other than these details, Khamenei seeks to continue its bloodletting by incessant executions to maintain repression and terror in Iran’s discontented society.
Accordingly, the executions carried out by the clerical regime is a premeditated crime. These executions are against genuine Islamic standards. They violate international standards of fair trials, and as the UN Secretary General stated last year, “The majority of executions were imposed for drug-related offences – crimes that do not meet the threshold of the ‘most serious crimes’ as required by international law.”
The Human Rights Council announced that these executions do not abide by the International Covenant on Civil and Political Rights. The UN High Commissioner for Human Rights, the Special Rapporteur on extrajudicial, summary or arbitrary executions, and The UN Office on Drugs and Crimes have also declared that these charges do not merit to be punished with executions.
The death penalty faces growing opposition and general detestation in Iran, as well.
The movement to obtain justice for victims of the massacre in 1988 has expanded in recent months cornering the mullahs with regards to continuing the executions.
A group of members of the regime’s parliament recently proposed a plan to commute the death sentences for some of the convicts of drug-related cases in a theatrical bid to contain social discontent. As far as the Velayat-e Faqih regime is concerned, it is not able to give up executions and torture until it is overthrown. It sees executions as its lifeblood.
This is why the majority of the regime’s leaders, from Khamenei, Rafsanjani and Jannati to its Chief Justice, head of the Justice Ministry and Bassij, rose to defend the massacre in the wake of the public dissemination of the audio file of Mr. Montazeri’s remarks on the massacre of 30,000 political prisoners, calling it “the supreme leader’s miracle”, their “honor”, and “a historic and revolutionary decision by the Imam (Khomeini).”
These confessions made by the masterminds and supporters of the ongoing executions today in Iran, are explicit and irrefutable documents on crimes against humanity committed by the ruling mullahs.
I call on the international community to provide the arrangements for the prosecution of the clerical regime’s leaders, particularly its leader Khamenei, in the international courts for the massacre of 30,000 political prisoners.
We call on western governments to make their relations with the Iranian regime contingent on a moratorium on executions.
And we call on our compatriots, and particularly the youths, to stand up to and resist against the policy of executions and killing.
The Iranian people and Resistance will bring justice to the clerical regime for violating their human rights.
This Resistance has risen up to create a society that bears no trace of the death penalty, torture, and inhuman verdicts issued under the mullahs’ regime. Instead, it will be ruled by laws based on forgiveness, compassion, humanity, and relations based on friendship and tolerance.