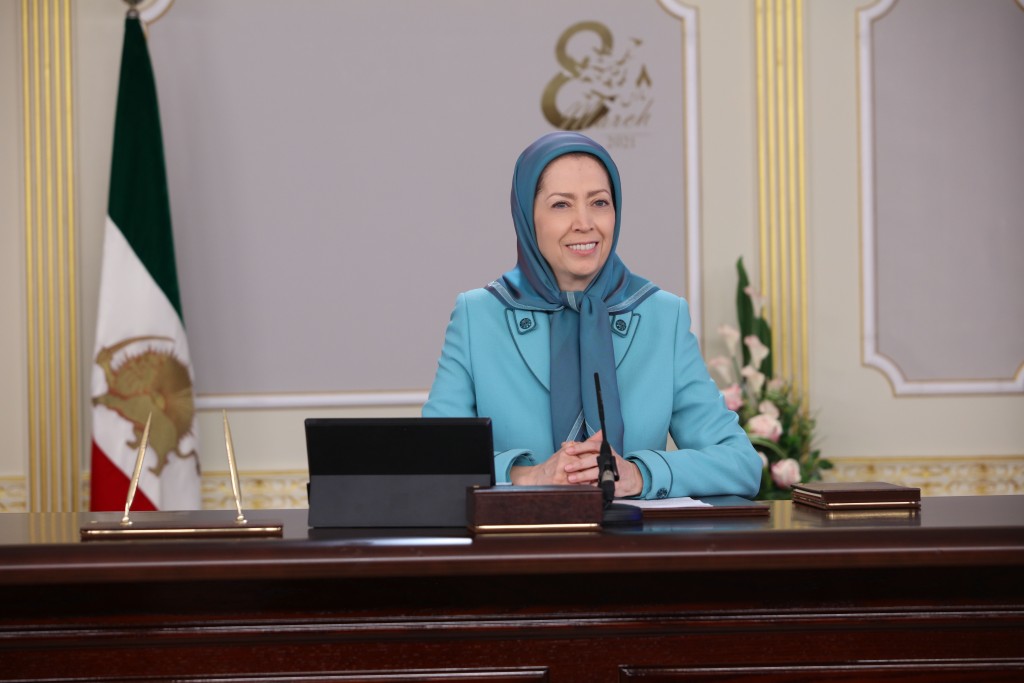 Maryam Rajavi: I urge all advocates of gender equality to support the arisen women of Iran

The Right Honorable Baroness Verma,
Distinguished Members of the British Parliament, women’s rights advocates,
Dear friends and sisters,
On behalf of the Iranian people and Resistance, I extend my warmest congratulations
on International Women’s Day.
And I salute all women who have fought and sacrificed for the cause of equality.
I pay tribute to this struggle’s pioneers, great women such as Berty Albrecht, Clara Zatkin, and Olympe de Gouges.
Women’s struggle and sacrifice have been and are the foundations of progress and the guarantee for democracy in our world. And henceforth, a world without injustice, oppression, fundamentalism, and poverty hinges on women’s struggle.

This year, International Women’s Day coincides with the Coronavirus pandemic.
Within Iran, the people are extremely dissatisfied.
The February 22 uprising by the people of Sistan and Baluchistan, in which the Revolutionary Guards killed dozens, reflects Iranian society’s increasing confrontation with the ruling regime.
The people of Iran yearn for freedom, democracy, and justice.
The Iranian people are deprived of the most basic necessities, such as water, bread, hygiene, and healthcare.

Nevertheless, the mullahs are working to build nuclear weapons and ballistic missiles and continue their criminal meddling in the Middle East.
Our sisters across Iran are the primary victims of COVID-19 because of intolerable economic and familial pressures. However, they also have the greatest motivation to foment uprisings to overthrow the religious dictatorship.
So, this year, International Women’s Day carries a commitment for Iranian women: Namely, that we can, and we must secure the victory of freedom and equality amid disease, oppression, and poverty.

Dear Friends,
The outcome of the significant gender gap in Iran is the imposition of extreme poverty on women and the denial of many of their most basic rights.
For example, presently, nurses endure great hardships in attending to the sick. But most receive a salary of 20 million rials ($80) per month.
Based on government statistics, more than 60,000 nurses were infected with COVID-19
last year.
Families force their young daughters into marriage because of poverty. The regime’s reactionary laws are the cause of this ominous phenomenon.
A judicial official revealed that there are between 500,000 and 600,000 child brides annually. One can imagine how horrific that situation is.

The misogynous regime in Iran

Dear friends,
Discrimination and barbaric oppression are indispensable to the mullahs’ worldview and policies.
The arrest of women in the streets, a vital part of the campaign to control society and impose repression, continues. The number of women executed during Rouhani’s tenure has reached 114, making the regime the world record holder in executing women.

Last month, during an en masse hanging in Gohardasht Prison, west of Tehran, one of the victims, Zahra Esmaeeli, a mother of two, died from a heart attack after seeing 16 others hanged before she was. Nevertheless, the henchmen still hanged her dead body. Her lawyer told this story afterward.
The misogynous regime wants to preserve its rule through repression. However, Iranian women play critical roles in challenging the regime and pushing the situation towards overthrowing the mullahs.
This is because women have tolerated the most oppression and suppression at the hands of this regime. As a result, they have greater motivation to end this regime.

In five nationwide uprisings, Iranian women have demonstrated remarkable heroism and their qualifications in setting up Resistance Units and enjoying the pivotal role in the organized resistance movement.
Iranian women have put the responsibility to end the catastrophe caused by the ruling theocracy on their shoulders and are prepared to make it happen.

Dear Friends,
We seek to establish a pluralist republic based on human rights in place of the ruling misogynous regime—a republic based on the separation of church and state.
We want to realize a genuine democracy in which women’s active and equal participation in political leadership is imperative.
In tomorrow’s Iran, all women’s individual rights will be recognized, including the freedom of belief, religion, employment, and travel. Women are free to choose their attire.
In tomorrow’s Iran, men and women will achieve total parity in social, political, cultural, and economic rights.

Women are completely free in choosing their husbands and in marriage. Any form of compulsion against women in the family will be banned. Women’s equal rights to divorce will be recognized.
Physical, sexual, and psychological violence against women in the workplace, educational centers, household, or anywhere else will be considered a crime.
Any sexual exploitation of women under any pretext will be prohibited.
The mullahs’ Sharia laws will have no place in tomorrow’s Iran.
All international covenants on the rights and freedom of women, including the Convention to Eliminate all Forms of Discrimination against Women,” will be at the front and center of civil laws.
The trampling of women’s rights is the most flagrant aspect of the elimination of the human rights of the Iranian people by the ruling mullahs.
Thus, all those concerned about the threats posed by this regime to the international community must support Iranian women‘s resistance.

Call on advocates of women’s rights

Dear friends,
Efforts to contain and control the regime’s nuclear program will not succeed unless they are coupled with firmness against violations of the human rights of the people of Iran.
Call on your governments to make economic and political ties with the criminal mullah regime conditional upon respect for human rights in Iran, especially women and prisoners’ rights.
There is a long line of women who are resisting in prisons across Iran. And although there is not much talk about them but they are among the most resistant fighters for human rights.
In the name of the equality movement, I urge all advocates of gender equality across the world to support the arisen women of Iran and the Iranian people’s uprising for freedom.
Thank you all very much. 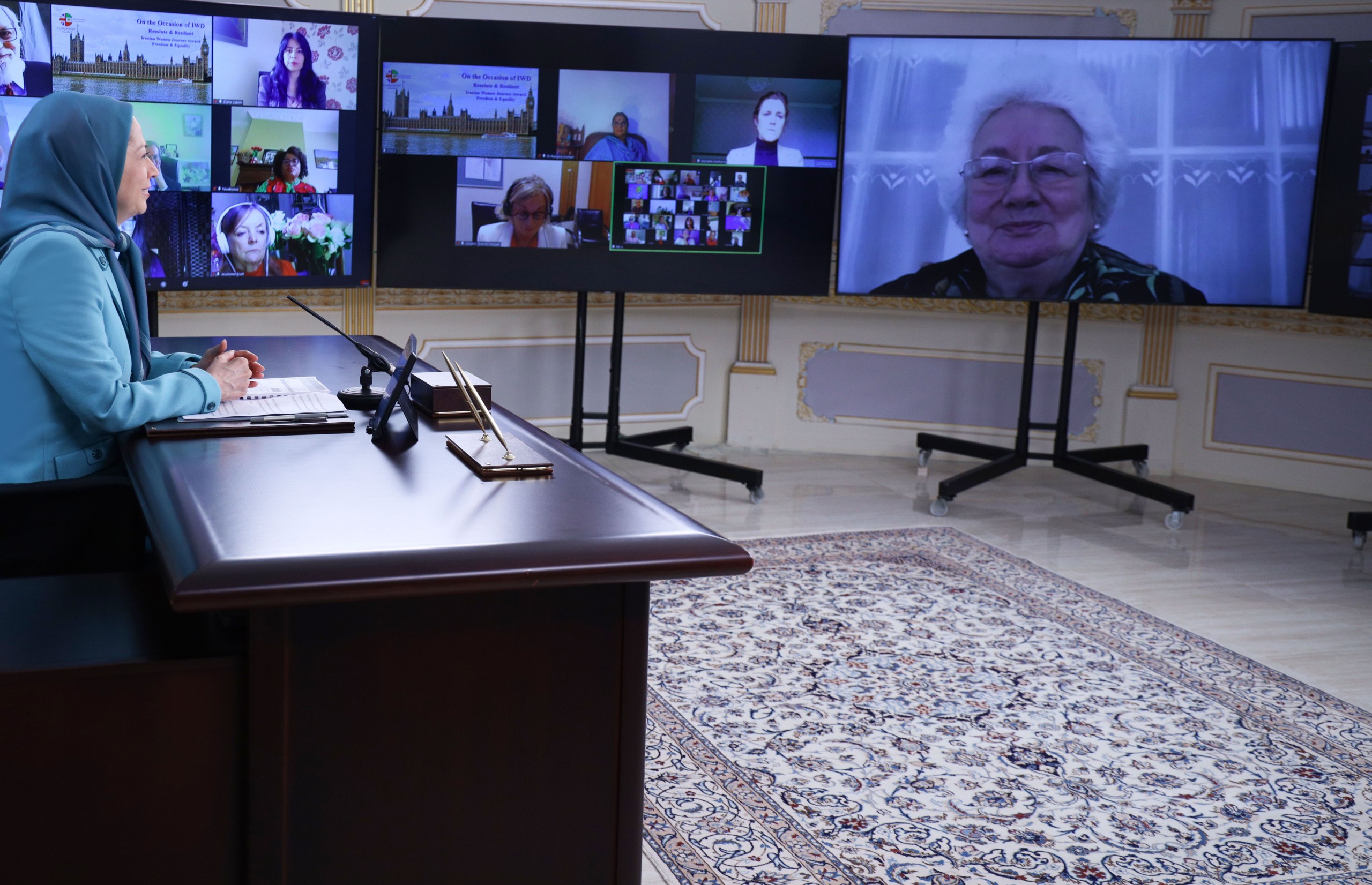