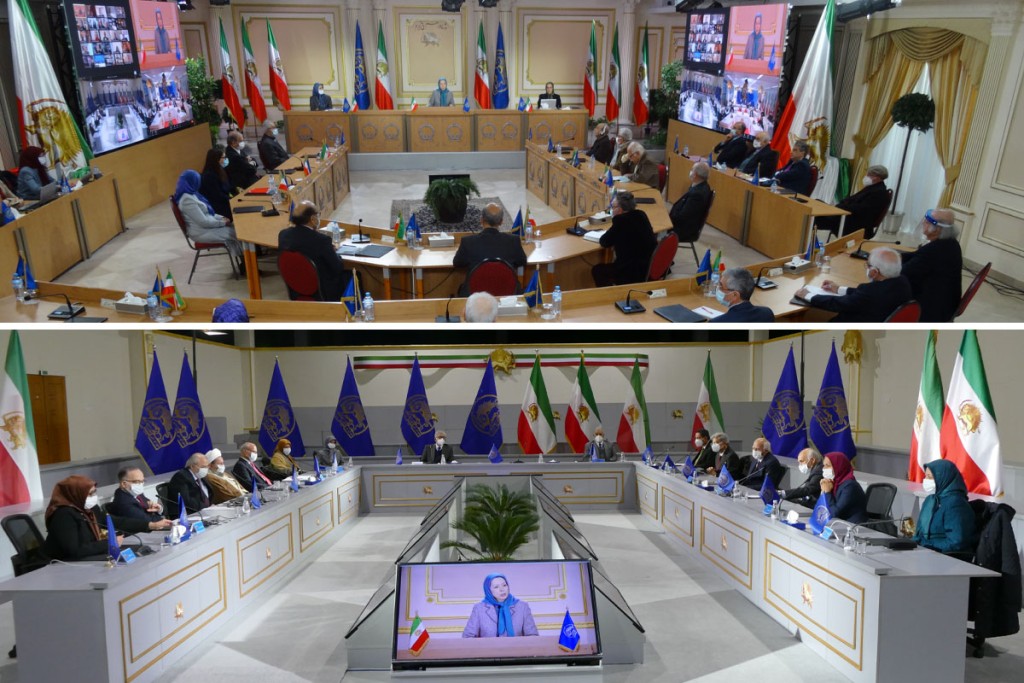 The National Council of Resistance of Iran (NCRI) held its biennial session in Paris on December 27 and 28, 2021. Mrs. Maryam Rajavi, the NCRI’s President-elect, presided over the session.

Due to the Coronavirus pandemic, flights cancellations, and other protective restrictions imposed to prevent the rapid spread of the Omicron variant, NCRI’s members in various countries and Ashraf 31 in Albania attended the session virtually.

On the first day of the meeting, a number of supporters and allies of the NCRI were present as observers, and some of them also spoke.

In her opening remarks at the NCRI session, Mrs. Rajavi said the regime’s Supreme Leader Ali Khamenei installed Ebrahim Raisi, the henchman of the 1988 massacre,2 as president (in 2021) and subsequently intensified repression, arrests, executions, and pressure on political prisoners. However, despite extreme challenges and the severe impacts of the Coronavirus disaster on the Iranian people over the past year, a major uprising has broken out in Iran every four months, signaling a powerful undercurrent that propels a vast and organized rebellious force. As such, widespread and unannounced arrests, forced confessions obtained under torture, and the demonization campaigns against the Mujahedin-e Khalq (MEK/PMOI) and the NCRI – as the only democratic and independent alternative – have proven ineffective and futile.

Regarding the Justice Movement (for the victims of the 1988 massacre),3 Mrs. Rajavi said: According to the book entitled, “Crime Against Humanity,” the massacre of political prisoners took place in at least 110 cities in Iran, and the names of 35 Death Committee members, who were responsible for the massacre in different provinces, have been revealed and published. The Justice Movement will continue its activities until the truth about all the massacres throughout Iran is revealed, and all the officials and perpetrators of this genocide and great crime are exposed and brought to justice in the courts of the Iranian people in our country.

During the trial of Hamid Noury,4 one of the henchmen of the 1988 massacre in a Swedish Court that began in August 2021, everyone witnessed how the henchman explicitly stated that if he failed to refer to the MEK using the derogatory epithet of “hypocrites” or “sect,” he would be arrested and punished by the regime upon his arrival in the country. This made it palpably clear that even uttering the MEK’s official name is the regime’s most impenetrable red line. As such, the use of labels like “sect”5 and “hypocrites” by anyone to refer to the MEK would be an indicator of unity with, and proximity to, the regime. During the Swedish court proceedings, the regime and its agents did their utmost to distort the image of the MEK, Mrs. Rajavi added.

In another part of her speech, the NCRI President-elect noted: The number of Coronavirus victims has now reached half a million people, and today students and children have also been added to the list of patients. The primary culprit responsible for all these casualties is the person of Khamenei. He has sacrificed the lives of the Iranian people in an attempt to preserve a rotten regime that has no place in history. By sending people to the Coronavirus killing fields, in the midst of sanctions, Khamenei and the regime’s former president Hassan Rouhani adopted the strategy of inflicting mass human casualties in an attempt to protect their regime from the threat of looming uprisings and the regime’s overthrow. The same strategy was deployed during the unpatriotic Iran-Iraq war in the 1980s and the 1988 massacre.

Regarding the ongoing nuclear talks in Vienna, Mrs. Rajavi said: These days, the political equation concerning the regime in the international arena is summed up in the nuclear program and the fate of the nuclear deal (JCPOA). More than ever before, developments show that the regime’s overall strategy is to continue to buy time in order to build, or obtain the capability for building, the bomb. The mistaken policy of appeasement and doling out concessions to the mullahs’ regime must be mitigated and corrected by reactivating the six United Nations Security Council resolutions. Nevertheless, I repeat that the ultimate solution and the correct approach (to contain the regime’s nuclear program) is to stand by the Iranian people and their uprisings and Resistance movement.

Additionally, political developments in Iran after Khamenei’s appointment of Raisi as president, the prevailing social movements, especially the uprising of farmers and people of Isfahan as well as that of the teachers and educators, and the deepening conflict between the organized and democratic alternative presented by the Iranian Resistance and the ruling regime, were among the topics that were discussed during the NCRI’s interim session.

NCRI members pointed out that although the regime’s Supreme Leader was able to appoint the mass murderer of the 1988 massacre Raisi as the head of his executive branch in order to close ranks, the past few months have shown that not only have factional feuds and crises within the regime not subsided, they have actually intensified. The reason is that the regime’s internal crisis, in the final analysis, arises from the historical incompatibility of the Velayat-e-Faqih (absolute clerical rule) system and its irreconcilable conflict with society and the organized resistance of the Iranian people.

During the session, the regime’s factional infighting over the budget bill that was presented to the regime’s parliament recently, the internal discord among the regime’s highest-ranking officials over the nuclear negotiations, among other issues, were also addressed. Such developments prove that the regime’s internal crisis and the expansion of it can no longer be covered up or contained.

The NCRI stressed that in the context of a socially explosive situation, Khamenei planned to confront the organized resistance, namely the MEK, by appointing Raisi, the henchman of the 1988 massacre, a massacre in which 90 percent of the victims belonged to the MEK. To this end, he intended to prevent the connection and linking of uprisings with the resistance movement. So far, however, this strategy has backfired.

On Friday, November 19 in Isfahan, Iranians and the world witnessed that on the dry riverbed of the Zayandehrud River a massive demonstration took place in support of the just demands of betrayed and looted farmers. These scenes were subsequently repeated in another large demonstration in Shahrekord. Yet another powerful uprising took place in Isfahan on Friday, November 26, when young rebels challenged the repressive Special Units and State Security Forces (SSF), shouting, “We have come to fight; fight and we will fight back.”

The NCRI emphasized in its session: The stunning expansion of the Justice Movement was a crushing response to Khamenei who sought to terrorize, intimidate, silence, and pacify the people, by installing Raisi. Despite the prevailing disgraceful policy of appeasement, the Justice Movement for the victims of the 1988 massacre staged persistent demonstrations and filed legal complaints with European judicial authorities, forcing Raisi to refrain from attending the UN General Assembly’s annual session as well as the Glasgow Climate Change Conference.

Members of the NCRI congratulated the Resistance for the defeat of the regime’s plots aimed at confiscating and derailing the Justice Movement for the 1988 massacre victims.7 The regime sought to whitewash an intelligent agent and to downplay the admirable bravery of political prisoners who perished during the 1988 massacre. The regime sought to both expunge the political identity of massacre victims and to also claim that they did not truly mark one of the most shining examples of resistance and inspirational perseverance against tyranny in Iran’s history, but that rather they did not choose to do so willingly and did not know what they were really fighting for. The regime did its utmost to minimize the true extent and scope of the 1988 massacre. NCRI members described the Iranian Resistance’s approach in this context, formulated in a statement released by the NCRI on November 15, 2019, as extremely productive and a true guide for action over the past two years. Based on this approach, since Hamid Noury’s arrest in Sweden, dozens of MEK members and sympathizers, who witnessed the massacre or had relatives murdered during it, expressed readiness to appear in court in order to ensure that the Noury is brought to justice. They launched an unrelenting and well-documented campaign, complete with concrete details, which exposed plots hatched by the regime’s Intelligence Ministry in this case and the specific role of Iraj Mesdaghi. The disclosure of audiotapes of Mohammad Moghiseh8 (Hamid Noury’s boss, also known as Nasserian) and Ali Razini9 (the head of the judiciary organization of the regime’s armed forces in 1988), the petition signed by over 1,600 former political prisoners,10 an investigative and comprehensive report by the NCRI’s Judiciary Committee, and the valuable revelations made by the renowned Iranian film producer and director Mr. Fereydoun Jourak11 about Mesdaghi, are all part and parcel of this campaign.

NCRI members noted that events that have unfolded during the five months after the commencement of Noury’s trial in Stockholm left no doubt that he could have escaped conviction had it not been for the testimonies and documents provided by members and supporters of the MEK.

When the presiding judge announced on October 26 that the court would move to Albania for two weeks, he said about plaintiffs and witnesses in Ashraf12: that based on documents and evidence submitted to us, they are crucial for this case, and it cannot be said that their testimony should be ignored or not included.”

Developments with respect to the Justice Movement have led to the revelation of a significant political truth; The confrontation between the MEK and Khomeini,13 which culminated in the 1988 massacre and imposed the largest fissure within the ruling establishment by forcing Khomeini to dismiss Mr. Montazeri14 as his designated successor. Publicly protesting against Khomeini and executioners such as Raisi, Montazeri called the 1988 massacre the greatest crime committed by the regime and told the perpetrators that due to this crime the Iranian people completely despise clerical rule, and that history would record their names as some of the greatest criminals. He described the MEK as representing a school of thought and a line of logic that cannot be destroyed through massacres and murder. Such actions would have the opposite effect, Montazeri argued, resulting in the spread of the MEK’s message instead.

Secretariat of the National Council of Resistance of Iran (NCRI)
December 30, 2021