The Parliamentary Committee for A Democratic Iran – Conference of French MPs 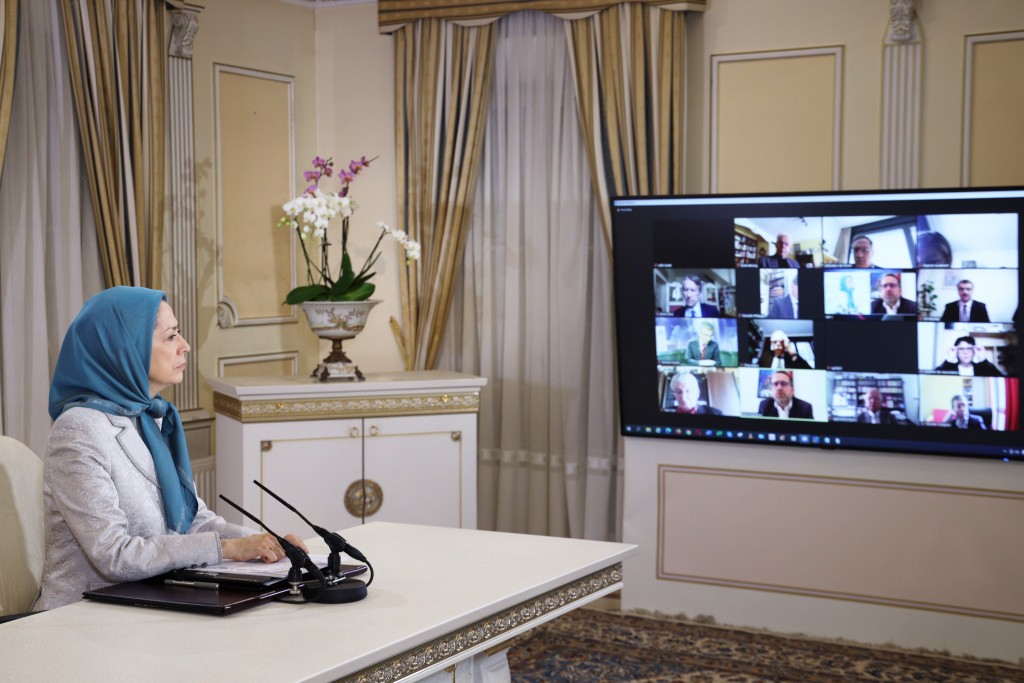 Maryam Rajavi: France and the European Union must stand with the Iranian people’s demand for freedom

Madame President,
Vice-Presidents of the Parliamentary Committee for a Democratic Iran
Members of National Assembly, Senators, and honorary parliamentarians,

Let me begin by welcoming the honorable Foreign Minister Giulio Terzi.
I am happy to see you again, despite the pandemic.
Thank you for your invitation to participate in this debate, as in previous years, at the National Assembly.

Dear friends,
With the pandemic, last year was a challenging year for the world. However, in Iran, unlike most countries, people were abandoned. The regime even refused to buy American and British vaccines.
To justify this crime, Khamenei said he did not trust these countries, nor France.
It is catastrophic, but the religious dictatorship uses the massive deaths from the pandemic to prevent a popular uprising.
Nevertheless, the prospect of change is more evident than ever because the regime has reached a dead end. It has no solution for economic and social crises.

Nationwide boycott of the regime’s elections

The clerical regime’s “presidential” election does not bear any semblance of legitimacy in the people of Iran’s eyes. The Iranian people’s nationwide boycott of the elections is the flip side of widespread protests in Iran and yet another response to the murder of 1,500 blood-drenched martyrs in November 2019.
Just this week, pensioners and retirees protested in 25 cities across the country, chanting that they will no longer vote because they have heard too many lies.
Despite the pandemic, Iranian society has repeatedly expressed its anger and revolt in demonstrations, prison riots, and strikes by all social strata. The state-run press describes the society as a powder keg ready to explode.

Last year, we were witness to a widespread wave of young people joining the Resistance. Despite mass arrests, Resistance Units have grown across the country.
On the international scene, the Belgian Judiciary sentenced a regime diplomat to 20 years in prison for a foiled terrorist attack against the NCRI’s annual gathering in Villepinte in June 2018.
The judicial investigation showed that the Ministry of Intelligence had planned this terrorist act and, of course, enjoyed the full cooperation of the Ministry of Foreign Affairs and its embassies. This shows that we are explicitly dealing with state terrorism. Moreover, officials of the same ministry are today sitting at the nuclear deal negotiating table.
Had the attack not been thwarted, it would have killed a large number of French and international parliamentarians and personalities. 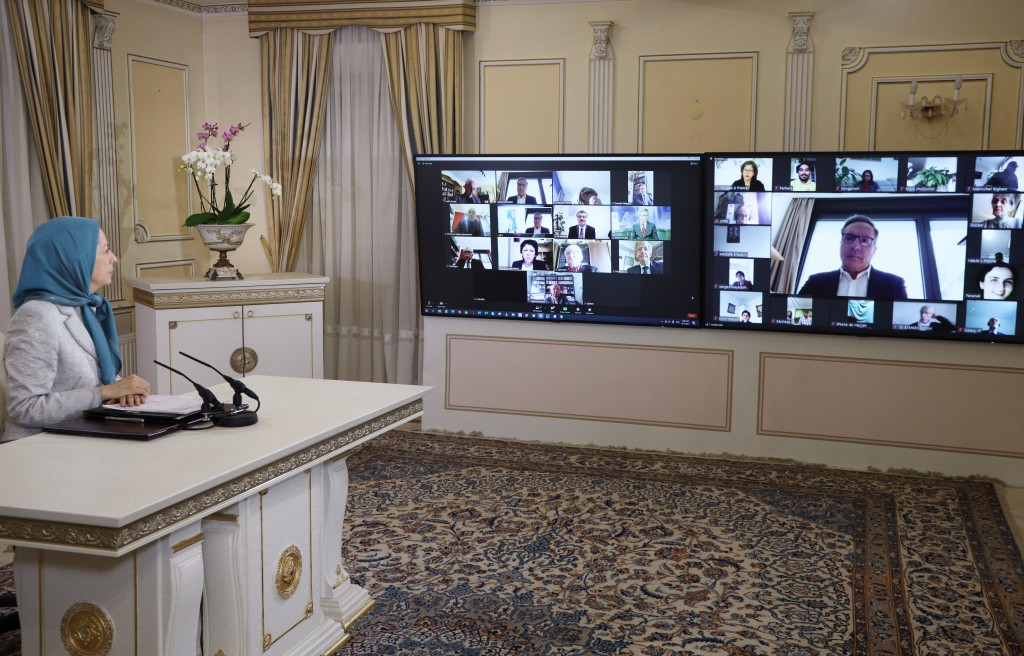 Despite the change of government in the United States, the nuclear issue remains at a dead end. If it accepts the international community’s demands and stops violating its commitments, the Supreme Leader will lose his hegemony, facilitating major uprisings.
If, on the contrary, it chooses confrontation with the West and continues to violate the agreement, it will have to pay a high price, especially since Europe and the United States are now working together.
As the Minister of Foreign Affairs, Mr. Jean-Yves Le Drian, said: Iran’s internal problems prevent it from seriously negotiating to find a solution.

The proof is that even during the nuclear negotiations, the regime started enriching uranium to 60% purity, which is a step towards making the bomb.
Indeed, Iran’s internal crises have put the country in a fragile situation.
The regime is putting a hollow show of force to extract concessions and buy time.
However, concessions cannot prevent the regime from obtaining the atomic bomb.
The clerical regime badly needs Europe. So, this is why Europe can play an effective role by adopting a firm policy vis-à-vis Tehran.

Without the Iranian Resistance’s efforts and revelations, the mullahs would have gotten to the bomb by now, which is part of the strategy by the religious fascism to survive.
In reality, the regime’s survival depends on domestic repression, export of terrorism abroad, and meddling in the Middle East. France can play a decisive role in this area.
The Iranian people expect France and the European Union to take concrete and firm measures against terrorism and human rights violations.
The European Union recently adopted some restrictive measures against eight commanders of the IRGC, the paramilitary Bassij, the State Security Force, and those who had ordered their forces to open fire on demonstrators during the November 2019 uprising.
The Iranian Resistance has consistently reiterated the need for the adoption of a decisive policy.
While welcoming the new EU measures as a positive step, I believe this trend must continue.

The flame of resistance must not be extinguished

The time has come for France, the cradle of human rights, to stand with the Iranian people for freedom.
As Victor Hugo said, “Nothing is more powerful than an idea whose time has come.”
The situation in Iran shows us that the time for the Iranian people and their Resistance to overthrow this regime is approaching.
The Iranian people and their Resistance seek to establish a pluralistic, democratic republic based on free elections, the separation of religion and state, gender equality, rejection of all forms of discrimination against ethnic and religious minorities, and abolishing the death penalty and a non-nuclear Iran.

Honorable deputies of the French National Assembly,
As always, your support and your presence alongside the Iranian Resistance reflect France’s true values.
As General de Gaulle said, “The flame of resistance must not be extinguished and will not be extinguished”. 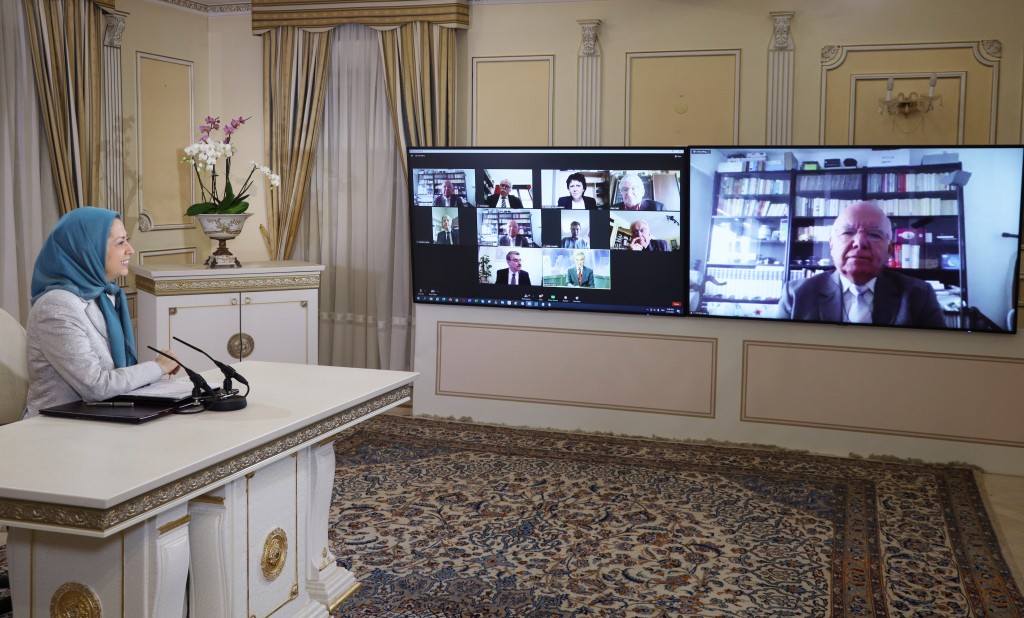