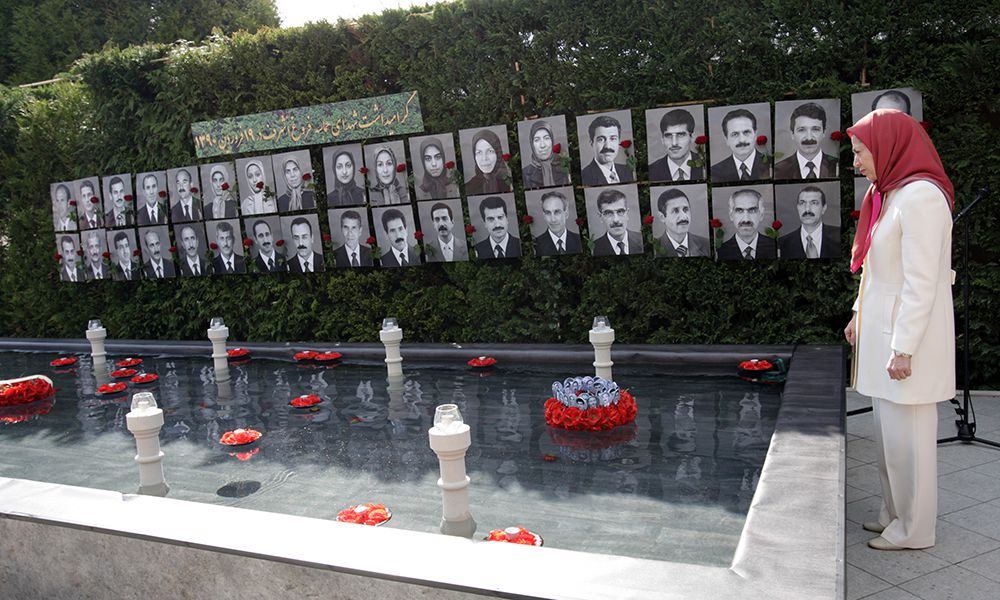 Sunday, 12 April 2015, in a ceremony commemorating the fourth anniversary of the massacre of Ashraf residents on 8 April 2011, the Iranian Resistance’s President-elect Maryam Rajavi called on the United States and the United Nations to take immediate measures to terminate the anti-human blockade of Camp Liberty and secure the camp’s protection as they have repeatedly committed themselves in writing to guarantee the safety and security of PMOI members in Camp Liberty.

A number of French elected representatives and supporters of the Iranian Resistance attended the event at the headquarters of the National Council of Resistance of Iran at Auvers-sur-Oise.
Elaborating on the Iranian nuclear crisis, Mrs. Rajavi said: The Lausanne Statement was a setback the regime conceded to under pressure, especially following the formation of a regional coalition to counter the mullahs’ expansionism and invasion of Yemen. However, a non-binding declaration of generalities that does not bear any signatures and does not enjoy the official endorsement of Khamenei, will never prevent the regime from acquiring the bomb or stop its deceptions.
She warned: The Tehran regime is stalling to buy time. Continued negotiations aimed at appeasing this religious fascism do not offer any security to the region or the world from the threat of the nuclear bomb. The regime must be obliged to comply with the UN Security Council resolutions. This has been and remains the only way to prevent the mullahs from acquiring the bomb.
She added: While the clerical regime is engulfed in crises at home and abroad, it attempts to cover up its weakness and pretend to be powerful by its aggressions in the region.

She stressed that the crimes committed by the mullahs in Iraq with the assistance of Maliki and in Syria with the help of Assad, led to the emergence of ISIS. She warned that alliance with this regime and its criminal militias in Iraq will only benefit ISIS. One cannot fight one extremism with the help of another extremism. Shiite and Sunni fundamentalists only reinforce each other. In fact, the answer to Islamic fundamentalism is the genuine Islam that promotes democracy and tolerance. Such Islam is represented by the PMOI/MEK in Iran.
Maryam Rajavi said: The mullahs’ dictatorship has indeed become extremely weak and frail. Its economic crisis is profound and social discontent is bristling. The internal power struggle is disintegrating its authority and the nuclear talks have further undermined its autocracy.
Maryam Rajavi reasserted that the only feasible way to terminate the nuclear crisis and end the threat of Islamic fundamentalism is the overthrow of the religious fascism ruling Iran. The alternative to this regime is a democratic and non-nuclear Iran which will be realized by the Iranian people and Resistance.