Urging to hold Ebrahim Raisi accountable for the 1988 massacre 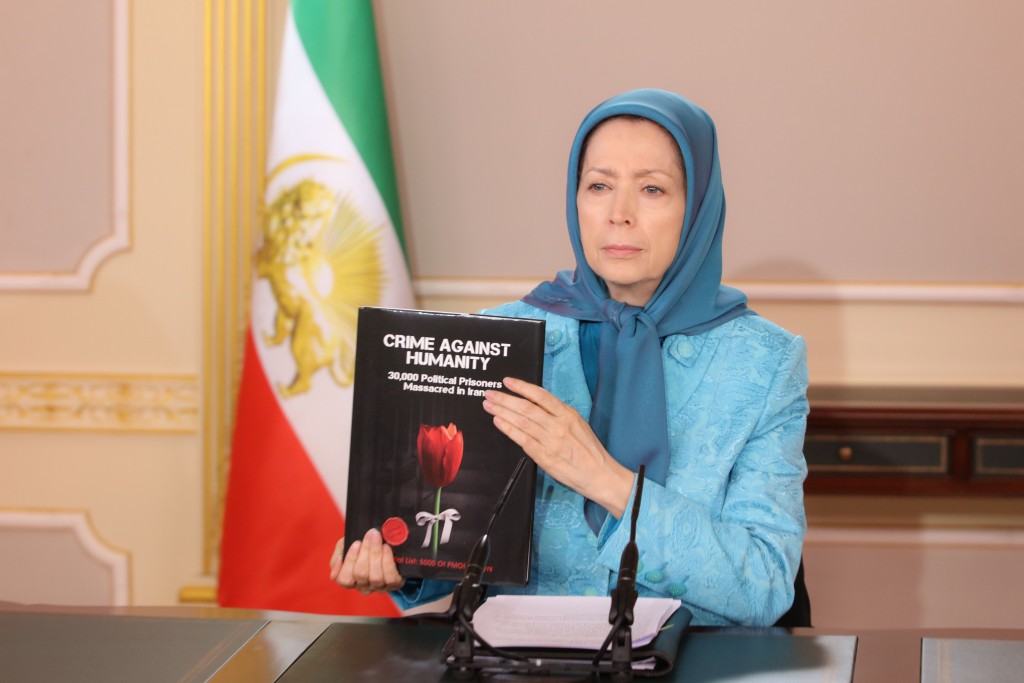 Maryam Rajavi: Raisi is a mass murderer. He does not represent the Iranian people and must face justice. Washington, D.C. – September 20, 2021

Fellow compatriots and supporters of the Iranian Resistance,
My sincere greetings to you all.
You have come together at the same time of the meeting of the UN General Assembly to convey the desire of the Iranian people for freedom, and to say that Ebrahim Raisi is a mass murderer. He does not represent the Iranian people and must face justice.
You are conveying the message of tens of millions of arisen Iranians who are united in calling for the overthrow of religious fascism.

About 435,000 people have lost their lives during the pandemic because of Khamenei’s criminal policies, such as refusing to buy vaccine from the US and the UK.
Beset by many crises, Khamenei has selected the henchman of the 1988 massacre, Ebrahim Raisi as the regime’s president.
Raisi was a member of the Death Commission in Tehran, implementing Khomeini’s fatwa by executing supporters of the People’s Mojahedin of Iran, who remained steadfast in their beliefs. 30,000 were massacred, 90 percent members or supporters of the PMOI.

Dear friends,
Raisi has appointed a collection of murderers, revolutionary guards and terrorists to his cabinet.
His Interior Minister was a former commander of the terrorist Quds Force.
His Foreign Minister was an assistant to the regime’s terror master Qassem Soleimani.
His vice president was the commander-in-chief of the IRGC.
With such a criminal band, Khamenei seeks to prevent public protests, and to speed up his nuclear weapons project.

Today, inflation is above 50 percent. A large portion of the middle class has been pushed below the poverty line, and millions of people have lost their jobs over the past two years.

Iran has seen six nationwide uprisings since December 2017.
Under such crushing pressures, the mullahs are stepping up repression at home and their aggressive policies in the region.
They have mobilized all their resources to obtain nuclear weapons. The regime has adopted a policy of blackmail to deter the international community and buy time to advance its nuclear project.
The international community must adopt a firm policy on Iran, something that meets the desire of the Iranian people and is vital to regional and global peace and tranquility.
The mullahs’ nuclear and missile projects and their export of terrorism and war to the region are all part of the same policy that rests on human rights abuses.

We urge the United States, the European Union, and its member states to refer the dossier of human rights violations in Iran to the UN Security Council. Such a measure will enable the UN to arrange for the international prosecution of Khamenei, Raisi, and other regime leaders for committing four decades of crimes against humanity and genocide.

We want the world to recognize the right of the Iranian people to overthrow the regime. We want them to acknowledge their right to establish freedom and democracy and a republic based on the separation of religion and state.

The clerical regime in Iran is at its weakest point. Raisi will achieve nothing for the regime by drone and missile attacks, by speeding up the nuclear program, and by escalating repression at home.
The people of Iran will no doubt overthrow the regime through their uprisings and their great army of freedom.

Thank you and God bless you all.