Maryam Rajavi: Raisi must be prosecuted now and not later 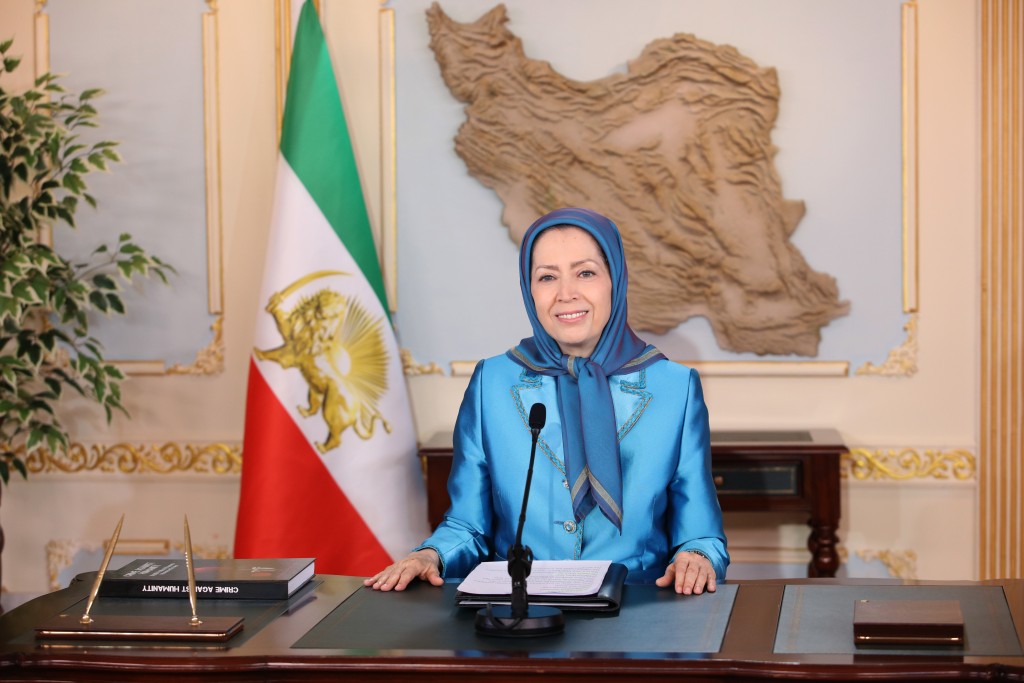 Distinguished speakers,
Ladies and Gentlemen,
Dear compatriots,
Allow me, first, to pay tribute to the 24 PMOI members who were murdered by the Iranian regime in the criminal missile attack on Camp Liberty six years ago. They were symbols of dignity and freedom who sacrificed their lives to free Iran. We salute them all.

This is a very timely conference. The regime is engulfed in many crises with no solution. The people’s daily life is worsening. The economic foundations have been destroyed. In 2021, inflation in Iran has reached 50 percent, and unemployment is on the rise.
Khamenei and the Revolutionary Guards (IRGC) are plundering the nation’s wealth or spending it on meddling in the region as well as on nuclear, missile, and drone projects. Corruption is widespread, while poverty is on the rise.
Due to serious domestic crises, the regime fears uprisings similar to November 2019 that shook the regime to its foundations. Therefore, Khamenei decided on a policy of contraction.
The current composition of the three branches is intended to deal with the situation the regime is facing.
Khamenei selected Ebrahim Raisi, through a sham election, as the regime president and then appointed another criminal, Gholam Hossein Mohseni Eje’i, as the Judiciary Chief.
Raisi was a member of the Death Commission in the 1988 massacre to implement Khomeini’s decree to execute PMOI members who remained loyal to the organization. 30,000 political prisoners were executed in a few months.
This book contains the names of only five thousand of those martyrs.
The regime’s Parliament Speaker is also a Revolutionary Guards commander. He proudly talks about his role in the suppression of students’ protests in 1999.
With Raisi and his cabinet, dominated by IRGC commanders, and a policy of contraction, Khamenei intends to preserve his fragile regime.
However, the crises are so deep, and the gap between the people and the regime is so wide, that Khamenei can neither resolve these crises nor contain the public anger.

In addition, in light of nationwide protests by almost every sector of Iranian society, and the activities of Resistance Units, the regime fears that even a small incident could trigger a major uprising.
In a word, the Iranian people are ready for the regime’s overthrow more than at any other time.
It is time for the international community to side with the people of Iran and their desire for change.
The Iranian people have clearly demonstrated their demands and their resolve for change. They reject the regime in its entirety.
So, let it be clear: regime change in Iran, by the Iranian people and their Resistance, is inevitable, and nothing can prevent it. It is time for the world to recognize this fact as well.
The people of Iran expect governments, including the U.S. and the European governments, to revise their policy on Iran and side with the Iranian people.

On the nuclear issue, it is time to abandon the policy of ignoring the regime’s violations.
The time has come to re-impose all of the UN Security Council resolutions suspended in 2015.
The mullahs are using the nuclear talks to silence the international community about the worsening human rights situation in Iran and its terrorism and meddling in the region.
Doing business with the regime will only fill the pocket of the IRGC and reinforce the suppressive organs and agencies in charge of the export of terrorism.
The people of Iran expect the international community to prosecute Ebrahim Raisi for genocide and crime against humanity in an international court. He is a mass murderer. He must be prosecuted now and not later.

In closing, allow me to repeat: The people of Iran are determined to overthrow this religious dictatorship as they did with the Shah’s dictatorship. They want to establish a republic based on democratic values, where people are the only decision-makers. For this cause, 120,000 of the best children of Iran have sacrificed their lives.
In the free Iran after the mullahs, the National Council of Resistance of Iran is committed to holding free elections and respecting the rights of all people.
We are committed to gender equality, including in political and economic leadership. We reject the death penalty and the mullahs’ Sharia law. We advocate a non-nuclear Iran.
I call on the international community and world leaders to adopt their policy on Iran in line with the Iranian people’s desire, and to identify Iran with its people and not with its criminal rulers.
Thank you all very much.