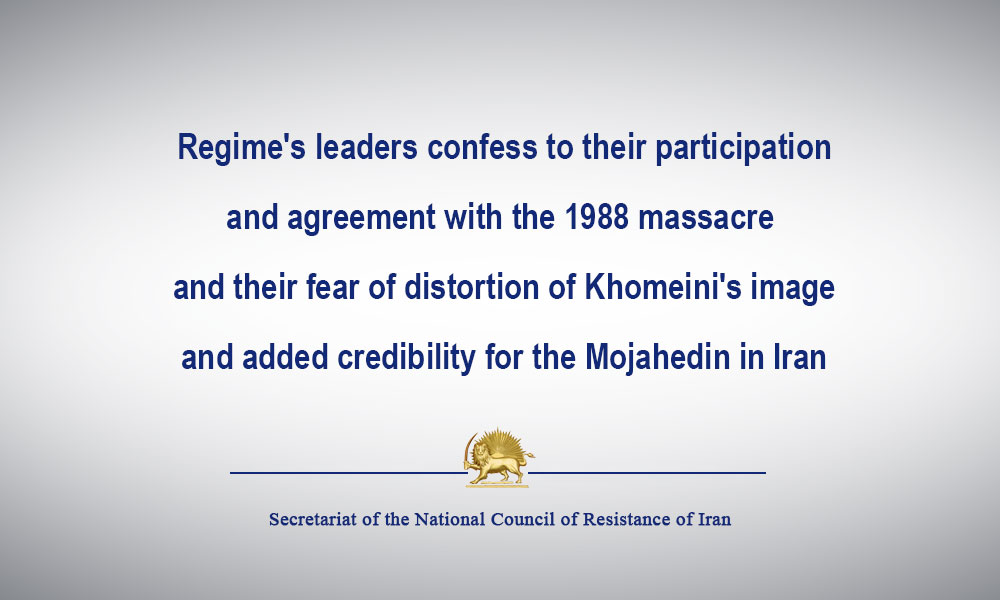 The Assembly of Experts is the highest institution in the mullahs’ Velayat-e Faqih regime.

The Assembly of Experts described the 1988 massacre of political prisoners as “a historic and revolutionary decision by his highness Imam Khomeini”, and “a prompt decision” to “deal seriously and decisively with the Hypocrites (the Mojahedin)”, indicating Khomeini’s “deep and insightful understanding.”

The decree for the massacre of PMOI prisoners is so anti-Islamic and so inhuman, that the Assembly of Experts –which is comprised of the most criminal ruling mullahs and a number of those directly responsible for the massacre– does not dare to repeat the decree. Instead, in a deceitful and scandalous maneuver, they describe the decree as Khomeini’s decision to have “fair trial for leaders and some members” of the PMOI.

The regime’s leaders are extremely concerned that the principle of Velayat-e Faqih would be undermined and Khomeini’s image distorted, while the Mojahedin would be “whitewashed” and “an atmosphere for (their) innocence created.”

It is not without reason, that in recent days, Khamenei praised “the blessed and radiant image of Imam (Khomeini)” and Rafsanjani defended “Imam’s unprecedented role and status in contemporary history” with regards to this massacre. Rouhani’s Minister of Interior, Mostafa Pour Mohammadi, also said, “We are proud to have carried out God’s verdict on the Hypocrites.”

Maryam Rajavi challenged the regime’s officials to publish the text of Khomeini’s verdict, questions by Mousavi Ardebili, and Khomeini’s response to him in the media without censoring them. She said the decree is anti-Islamic and contradicts even the foundations of the mullahs’ own fundamentalist jurisprudence.

Maryam Rajavi urged the clergy and religious authorities in the world of Islam to condemn this criminal decree and the spilling of 30,000 political prisoners’ blood, and do not allow this great crime which is unprecedented in contemporary history be registered in the name of Islam and Muslims.

She added: The documents published recently, as well as the admissions made publicly by the regime’s highest officials and institutes in recent days, have doubled the need for international prosecution of those responsible for this great crime. Based on its duties, the United Nations must set up a committee to examine these confessions and register them as decisive documents of crime and thus prepare the legal grounds for legal prosecution of the criminals ruling Iran.

Maryam Rajavi added: Now that the regime’s leaders confess to having committed the massacre, they have to announce the names of those massacred, publish their last wills, and the addresses of their graves, as well as the names of all members of the death commissions in various provinces.

The statement by the Assembly of Experts describes Khomeini’s decision as “fair trial of leaders and some members” of the Mojahedin, while Khomeini wrote in his evil decree: “Those who insist on their position of hypocrisy in prisons across the country, are enemies of God and condemned to death… It is naïve to have mercy on enemies of God… Those gentlemen who are responsible for making the decisions, must not allow themselves to have any speck of doubt.” Then in reply to questions by Mousavi Ardebili, Khomeini wrote: “Anyone at any stage, if persists on hypocrisy, he/she is punishable with death. Swiftly, annihilate the enemies of Islam. As for the examination of the cases, those measure are preferable that would expedite execution of the verdicts.”

The statement of the Assembly of Experts includes a quotation from Khomeini’s letter to Montazeri on March 26, 1989, which uncovers the main reason for the massacre, stating, “Since it has been made clear that after me (Khomeini), you (Montazeri) will hand over Iran to liberals and through them to the Hypocrites, you have lost the competence and legitimacy for future leadership of the regime.”

Recently, Mehdi Khaz-Ali, one of the officials of the presidential office under Ali Khamenei and Rafsanjani, also revealed parts of the regime’s shocking crimes in the course of the 1988 massacre. As for the reason for the massacre, he said: The largest and most populous group that opposed the state was the People’s Mojahedin Organization which held four hours of parade in Enqelab Avenue. This group could be annihilated only with authorization from Imam (Khomeini)… The officials wanted to uproot this group while the Imam was still alive. They said that they would possibly join (the organization) once they were released. Then we would be confronted by a large number of people. While if we execute them, now, these executions will terrify their families and no one would dare to join (the PMOI).

Before the Assembly of Experts’ statement, Ali Khamenei expressed concern in a meeting with the regime’s officials on August 24, 2016, that the audio recording of Mr. Montazeri’s meeting would “attempt to whitewash” and create “an atmosphere of innocence” for the Mojahedin and distort “Khomeini’s image.”

On August 27, 2016, Rafsanjani also expressed regret over “a new wave of attacks directed against Khomeini” and said: “The wave has embraced virtually all foreign opposition media, to the extent that the mayor of Paris recently held an exhibition which recreated the scenes of executions in those days… The extent of support for the Mojahedin Organization at this time deserves to be pondered.” He added, “The main objective of our international and domestic enemies is to take revenge from the unprecedented role and status of Imam (Khomeini).”

Majid Ansari, Rouhani’s legal deputy, also said that in addition to distortion of Khomeini’s image, “a complicated conspiracy is being concocted on the international level to present the People’s Mojahedin Organization as a legitimate and civilian organization.”