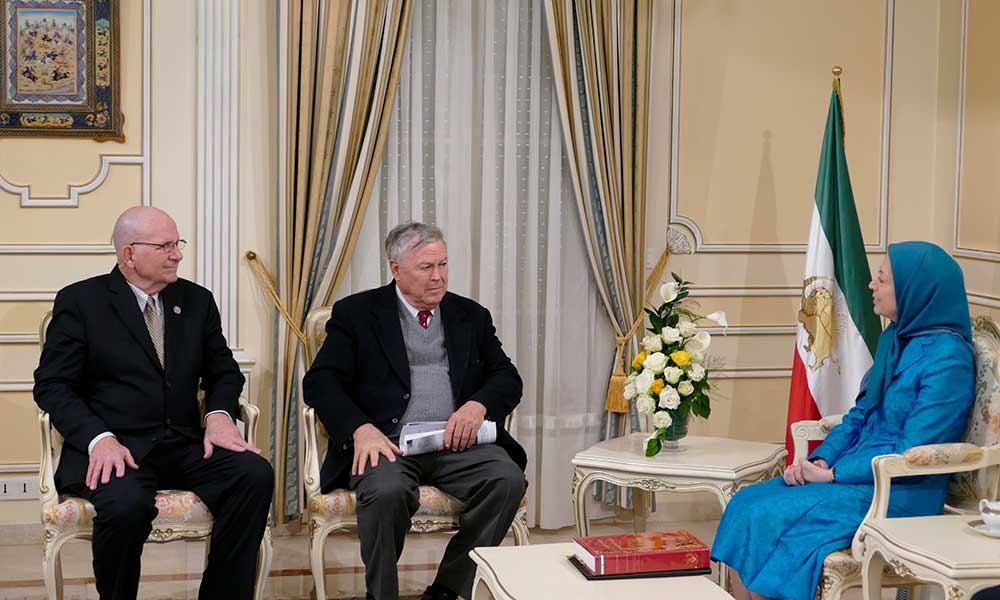 In the meeting which took place at Maryam Rajavi’s residence in Auvers-sur-Oise, the two sides discussed the uprising by the Iranian people that began on December 28, 2017, its consequences and the options before the international community.

The senior U.S. lawmakers condemned the Iranian regime for its brutal crackdown on the protests and underscored that the international community must break its silence and inaction vis-à-vis the atrocities perpetrated by the regime against its own citizens. They also urged the U.S. Government to impose comprehensive sanctions, including financial and banking sanctions on Iranian regime’s officials and entities, especially those involved in suppressing the protesters. They also called for measures that would enable the Iranian people to overcome the blocking of the internet and allow them access to communication systems. The lawmakers urged the U.S. Government to force the expulsion of the Islamic Revolutionary Guards Corps and its proxy militias from the countries in the region.

“The uprising marked a turning point in the struggle of the Iranian people to attain freedom and democracy,” Maryam Rajavi said, adding that the “chants of ‘death to Khamenei’ and ‘death to Rouhani,’ and ‘reformer, hardliner, the game is now over’ made it palpably clear that the Iranian people demand the overthrow of this regime.”

She emphasized that this uprising will continue until the overthrow of the clerical regime because the underlying factors that propelled the uprising, namely economic mismanagement, rampant government corruption, increasing poverty and inflation, escalating suppression, and a whole host of other social and political problems cannot and will not be resolved.

Rep. Poe emphasized that the world community must hold the Iranian regime’s officials accountable for their atrocities and assist the people of Iran in their noble quest for freedom and democracy.