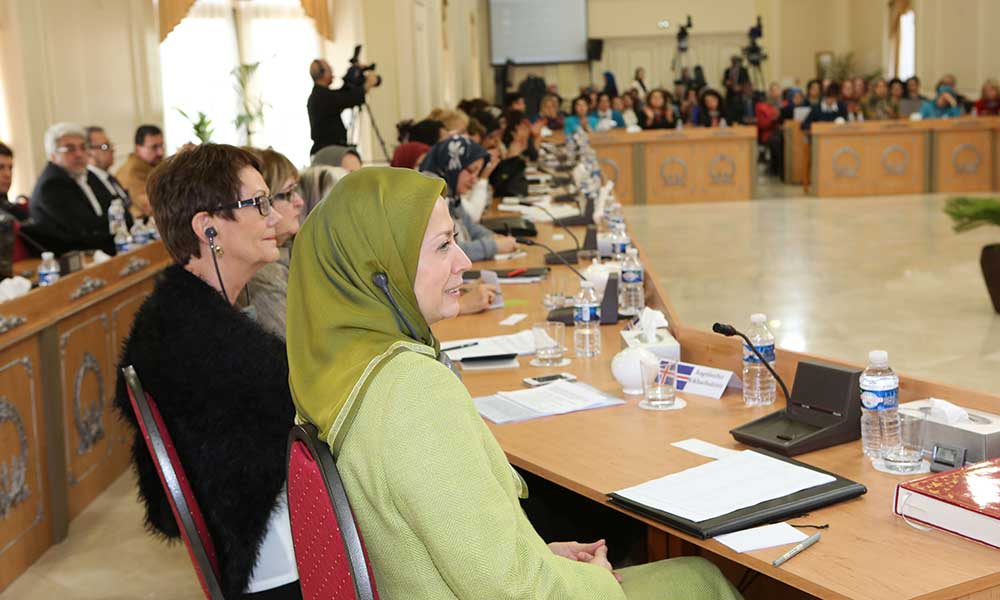 In my view, the real visage of the nations of the Middle East is the solidarity among its different peoples, who, despite their diverse nationalities, languages, cultures and religions, are all sitting here together. This is in diametric opposition to the flames of discord, vengeance and enmity that the Iranian regime and its allies have fanned in this region of the world.

On behalf of the Iranian people and Resistance, I would like to express my profound solidarity and sympathy with the people of Syria, especially with our sisters who are aggrieved, terrified and displaced throughout the country.

They are all being crushed by an evil war that is being directed by Tehran. These atrocities are occurring in Iraq and in Al-Anbar Province, Fallujah, Ramadi, Mosul, Diyala and Hillah.

Ending these calamities requires the ousting of the religious dictatorship ruling Iran. This is the most important responsibility of women’s movement and advocates of the ideal of gender equality.

A strings of obstacles, hostilities and malfeasance stand in our way: an assortment of discriminations and inequalities in the family and in education and occupation, as well as violence, backwardness, poverty, and a multitude of deprivations and prohibitions and most importantly, the ogre of fundamentalism.

Those who advocate the ideal of freedom want to sweep aside these obstacles so that everyone could enjoy freedom in all spheres. But there is a mountain of difficulties along this path. They are so many and so complicated that at first glance it appears as though the objective cannot be reached.

Dictatorship and the male-dominated order have left women with only one choice: surrender and conformity; which means submitting to this oppressive, exploitive order and culture and in reality accepting the demise of their very humanity.

However, women in the ranks of the Iranian Resistance have rebelled against this coercion and sense of doom. They have presented another solution: Resistance and struggle.

The dictators who perpetrate crimes against humanity in the Middle East region pivot around the Iranian regime. To stay in power, they place a variety of obstacles in the path of, and exert great pressure against, the resistance movement.

These actions include persecution, harassment and torture of members and sympathizers inside Iran, suppression of Ashraf families, a campaign of demonization and misinformation, slanders and a series of inhumane tactics to suppress Ashrafis.

For the past 11 years, the Ashrafis have been under a de facto house arrest; a total siege which has violated many of their fundamental rights.

On the international scene, Western governments’ appeasement of the mullahs’ regime has made our struggle even more difficult, while granting the regime with enormous advantages. Through an extraordinarily costly campaign, the regime has attempted to enlist the partnership of all governments in the suppression of this resistance and in the imposition of restrictions against it. This is because the Iranian Resistance has terrified the regime immensely as its main adversary.

The fact that the U.S. and European governments, despite their commitments and promises, refuse to provide protection for the residents of Camp Liberty, or refrain from admitting the residents into their countries, has one and only one reason: their ties to the ruling mullahs.

Today, fundamentalism has created a monumental challenge to women in the Middle East, North Africa and Central Asia, just like it has for women in Iran. At the same time, this challenge has created extensive battle fields for women in these countries. Therefore, as far as women across this region are concerned, absolute priority must be given to the achievement of the following:

Fundamentalist forces focus on penetrating these spheres in a bid to undo the achievements and to suppress the freedoms of all peoples and nations.

It goes without saying that the Iranian regime, whose fundamentalism has been in power for the past 35 years, is working hard to disrupt these institutions and free elections while snaring the countries recently liberated from the yoke of dictatorships into the morass of fundamentalism.

For this reason, your active participation in these arenas constitutes the most important step in confronting the Iranian regime’s interference in your own countries. The campaign to overthrow this regime is linked to the fate of all peoples in the region. Therefore, based on our collective experience, I repeat that in the 21st Century the struggle for gender equality is intertwined with the struggle for liberation from dictatorship and fundamentalism.

But, they key question is: how do we advance this struggle?

The experience of our own movement has shown that the struggle can be advanced by putting aside disbelief, particularly women’s self-doubt regarding their own abilities and those of other women, and by having faith and confidence in the abilities and in the power of women in general;

By perseverance, by paying the requisite price every day and through self-sacrifice; and

By refusing to surrender, by welcoming hardships and by accepting greater and more diverse commitments.

The prerequisite to advance on this path is solidarity. This requirement explains our movement’s continuing efforts to establish greater and stronger bonds with other nations, especially with enlightened and responsible men and women in those countries.

Thus, I extend my hand to seek your support, my sisters and advocates and friends of the Iranian Resistance.

And I ask you to do whatever you can to support the Mojahedin in Liberty prison, to secure the freedom of the seven Ashraf hostages, to win the protection of vanguard women in Liberty and to help the Iranian people’s Resistance.

I must emphasize that the campaign to overthrow the mullahs ruling Iran is a struggle that belongs to all nations of the region. It is also a struggle to establish peace and security all over the world. Because as long as the octopus of fundamentalism sits in Tehran, there will be no guarantees for peace and security in the region or the world. Therefore, the only option left is to uproot the octopus of fundamentalism in Tehran. If it were not for this regime, Bashar Assad would have been toppled long ago; in Iraq the true representatives of the people, and not those who receive their orders from Tehran, would have been in power; and the situation in Lebanon and Palestine would have been different.

Therefore, supporting the Iranian Resistance, which has arisen to remove this ominous regime, not only expedites the freedom of the Iranian people, but it also contributes to the liberation of all peoples of the region from fundamentalism, terrorism and misogyny.

Your support and assistance for this struggle is, in my view, greater and more effective than the actions of the world’s greatest superpowers. An immense power and energy lies in your support and help. And that is why we are incredibly committed and have great faith in expanding these arrangements and strengthening such bonds. I believe that our victory and the triumph of the region’s peoples depends on this solidarity.

I hope and I am confident that in this common struggle we can deliver on the collective commitments that God Almighty, history and nations of this region have placed on our shoulders.

I think that in the Information Age, and in the era of communications, in an era in which women can especially garner greater roles, an example of which is today’s gathering that is one of its very discernible and clear signs, we are deserving and worthy to be able to fulfill our commitments.

I am confident that one day we will be able to celebrate our victory over fundamentalism in Tehran itself. And that day represents a time of profound celebration for the people of the region and the entire world.