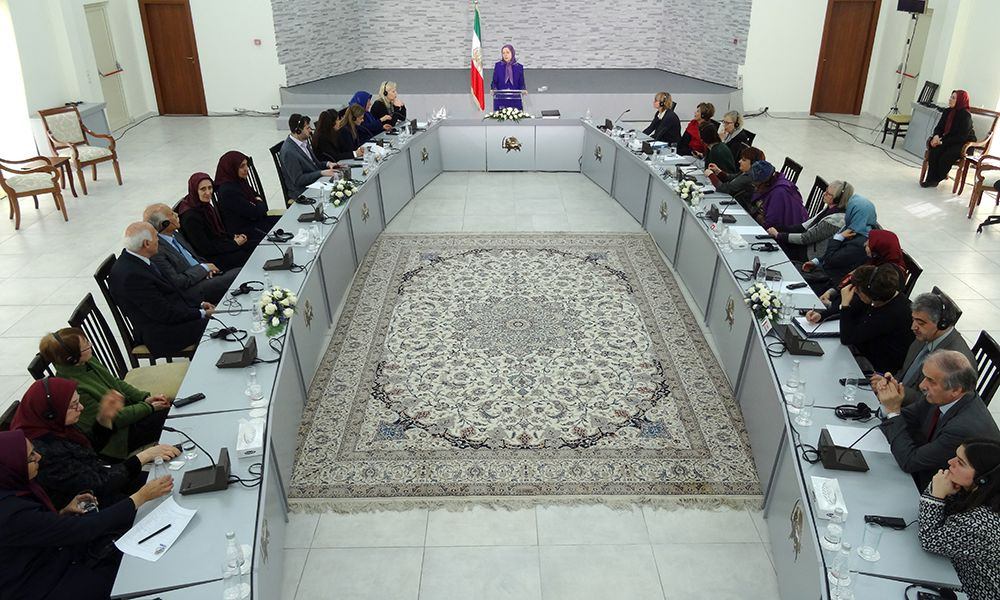 Maryam Rajavi‘s remarks at IWD roundtable discussion: Women in Leadership, the Experience of the Iranian Resistance

Dear sisters,
Distinguished friends,
The Iranian women’s struggle for freedom and equality has lasted one-and-a-half centuries. Iranian and Western historians who have studied the developments of the past 150 years in Iran have clearly attested to this reality.
Over this span of time, we have seen vanguard women who rose up and proved their competence in various arenas despite the reigning culture and policies of tyranny and misogyny. This phenomenon was most significantly demonstrated in women’s courageous participation in the anti-dictatorial struggles over this period.
Women’s struggle is essentially the best and most comprehensive indicator of progress in a given society. How can we measure the advances of a society towards real progress and development? The answer is to the extent it endeavors to achieve freedom and equality.
In the absence of gender equality, any political, economic or social progress would be ineffective, fleeting, or reversible.

From this vantage point, the uprisings which led to the 1979 overthrow of the Shah in Iran marked a major leap forward through women’s remarkable and extensive participation in street demonstrations. This new phenomenon unveiled the Iranian people’s widespread desire for progress. At the same time, it revealed a shocking contradiction:
One the one hand, the ruling regime quickly adopted regressive and despotic policies and caused appalling backwardness. On the other hand, the Iranian society was broadly seeking freedom and democracy, and sought to make social progress and advancements.
Such contradiction led in the first step to a major clash. The barbarity and savagery of the new regime drenched the Iranian revolution in blood.

The Role of Women in the Iranian Resistance

Women‘s active participation in confrontation with the mullahs’ religious fascism formed the corner stone and foundation of resistance against the regime.
Quantitatively, women’s participation in this struggle was extensive since the outset. Qualitatively, they were brave, efficient and selfless.

Tens of thousands of women were tortured or executed in the struggle against the ruling fundamentalist regime. These events were particularly transpiring in the 1980s.
If women did not have powerful motivations, and if they had not set their sights on a bright and magnificent horizon, they would have definitely been intimidated by the merciless tortures and massacres that were unprecedented in our contemporary history. But, instead, the clampdown made them even more determined and resolute.
Women’s role rapidly became more pronounced in the post-revolution developments in Iran. They became the pivotal force of the movement.
Today, women hold key and leadership positions in the resistance movement. They make up more than 50 percent of the members of the Resistance’s parliament-in-exile.
The guiding principles of women’s role in the Iranian Resistance can be summarized as the following:
First, the struggle of the women of this movement for equality has been deeply intertwined and connected to the broader struggle for freedom in Iran. Therefore, it has targeted the ruling dictatorship, which is a religious tyranny, while combating its forced religious edicts, misogyny and inhumane discriminations.

Second, they have waged a foundational struggle against objectification of women while defying the gender-based ideology that forms the central tenet of inequality.
Third, women have recognized their mission and mandate in leading this movement while discovering and subsequently implementing in practice the fact that the hegemonic role of women in this perseverance provides a liberating force and propeller.
Fourth, the pioneering women have linked their struggle to the efforts and struggle of the resistant and equality-seeking men of the movement. They see it as an important part of their responsibilities to support the men of the movement in the struggle against inequality and against patriarchal thinking and culture.

The Emergence of Islamic Fundamentalism

Iranian women have gained many valuable experiences in their struggle against the ruling religious tyranny, which is the source of Islamic fundamentalism.
A cursory review of the history of the origins of fundamentalism and its essence will aid us in explaining this point more clearly.
Since the late 18th century and early 19th century, in the geographical region that hosts most of the Islamic countries – extending from North Africa to the Caucuses, Central Asia and the Indian Ocean – under the shadow of major political, social and technological developments in the world, the people engaged in struggles to change their destiny. They sought to gain freedom, independence, rule of the law, as well as economic and social progress. Why did this wave wash over Islamic countries?
In such a setting, several destructive factors set the groundwork for the emergence of Islamic fundamentalism. Ignorance, lack of education and backwardness are, of course, some of the contributing factors. Additionally, however, one can mention the interventions and mistakes committed by western governments in these countries, whose catastrophic effects, including invasions and the displacement of peoples and destruction of national social institutions of the countries of the region produced deep antipathy and a sense of resentment toward western countries.
This fact has been verified today by quite a few western thinkers and even politicians.
Western governments gave support to dictatorial regimes and thus destroyed the middle class, produced an uneven economic and social growth, and eliminated nationalist parties and freedom-loving movements in these countries.

The Defining Impact of the Iranian Regime

The ascendance to power of Khomeini and his allies in exceptional and unique historical circumstances marked the exact moment when Islamic fundamentalism as we know it entered the global stage. This was a horrendous power-thirsty and profoundly misogynous force founded on religious discrimination. It instituted its backward sharia laws as a mechanism to establish a religious tyranny, and became a model of governance for fundamentalist groups.
In reality, dictatorships like the previous regime of Iran were too weak and corrupt to be able to stand against the waves of people who demanded freedom and particularly against the power of women and youths.
So, instead, religious fundamentalists undertook the mission to crack down on and suppress them.

The Essence of Fundamentalism

At its core, what does Islamic fundamentalism want to oppose or stand against? Is it the world of Islam lining up against the West or in particular against Christianity and Judaism?
The answer is NO. The truth is that the real dispute is not between Islam and Christianity, Islam and the West, or Shiites and Sunnis. It is, rather, a confrontation between freedom and subjugation, and between equality and injustice.
Islamic fundamentalism, in essence, represents a backlash against the overwhelming tendency of the peoples of the region, especially women and youth, towards freedom, democracy and equality.

It should now be clear why fundamentalism focuses its wrath and violence against women more than anyone else. It is because women’s emancipation was the central theme of the demands of the enormous tide of people who sought a new order, freedom and equality.
Women emerged as a new force in the 1979 revolution in Iran and played a remarkable role.
For this reason, the role of women rapidly evolved and became more prominent in the course of the developments after the revolution, turning into the pivotal force of movement and struggle.
They were in the frontlines of resistance in torture chambers; they were in the front lines of demonstrations during the 2009 uprising; and they were in the front lines of the command structure in the National Liberation Army of Iran.

In contrast to this, enmity to women lies at the heart of Islamic fundamentalism and suppression of women is the central component for the suppression of the entire society.
Why did the mullahs need to revive the laws of past millennia in the final years of the 20th Century?
Why did they commit such inconceivable crimes under the name of Islam?
The answer is because they faced a widespread and general desire that could only be confronted and contained by naked oppression.
The Iranian regime innovated most of the cruelties and evil crimes that were later copied and borrowed by fundamentalist groups and individuals. Such atrocities even found their way into the laws of a few Islamic countries.

The Iranian Resistance and its vanguard women launched their fight against a regime which not only was the enemy of the people of Iran but the main threat to the entire Middle East.
We have been warning since three decades ago that Islamic fundamentalism is a global threat.
Over the past 15 years, this threat has emerged in the form of terrorism and conflicts in the Middle East.
Today, we can see that European capitals have not remained immune from terrorist crimes carried out by fundamentalists. Wherever fundamentalists guided by the mullahs enter the scene, their terrorism and destruction quickly begins.

In conclusion, I would like to underscore the imperative and necessity for the entire world to confront this ominous phenomenon.
The mullahs of Iran and their fundamentalist disciples are not only the enemy of the people of Iran, but also the enemies of all Middle East nations and the entire world.
In particular, in so far as it concerns women, fundamentalism targets and jeopardizes all the achievements that women have made to date.
Therefore, confronting the Iranian regime should be the immediate goal of women’s struggle all over the world. Women’s international sisterhood and solidarity demands that they support the fight against the fundamentalist regime of Iran.
I thank you very much.