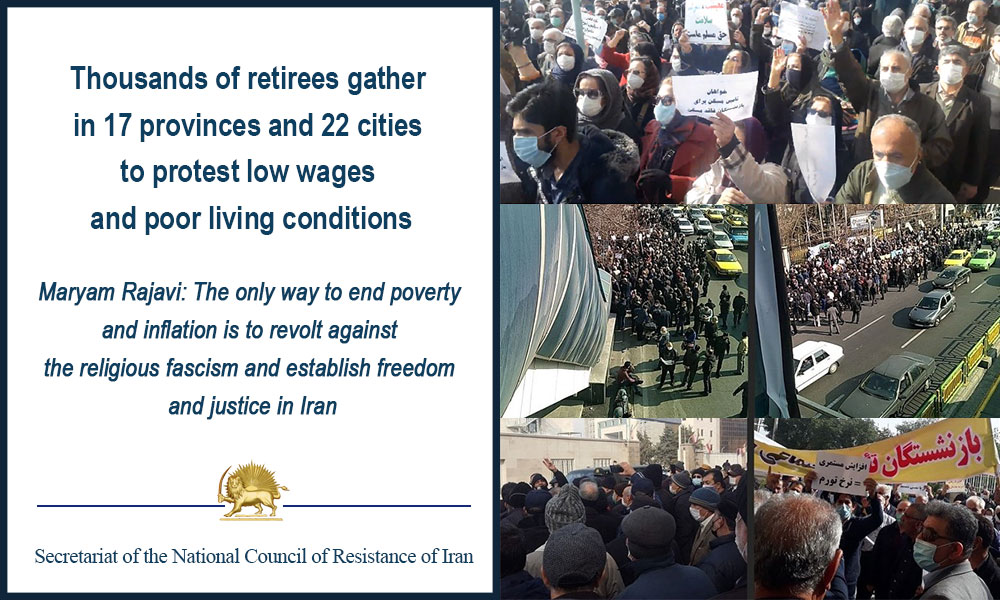 Maryam Rajavi: The only way to end poverty and inflation is to revolt against the religious fascism and establish freedom and justice in Iran.

Despite the regime’s deceptive measures and promises, on Tuesday, January 26, 2021, retirees and social security pensioners rallied in 17 provinces and 22 cities to protest high prices and unbearable living conditions. The protesters chanted, “Only by taking it to the streets, we will be able to obtain our rights,” “We will not rest until we obtain our rights,” “Down with the deceptive government,” “We express our outrage against these discriminations,” “Our main demand is to level wages according to the inflation,” “We are all together to eliminate discrimination,” and “Our tables are empty, enough is enough.”

Despite deterrent and repressive measures, large numbers of retirees rallied in front of the regime’s Ministry of Labor in Tehran. Also, a large number of retirees in Isfahan, Ahvaz, Mashhad, Shiraz, Tabriz, Rasht, Sari, Ilam, Qazvin, Karaj, Kermanshah, Ardabil, Neyshabur, Khorramabad, Hamedan, Arak, Shush, Sanandaj, Borujerd, Kerman, and Bojnurd gathered in front of the regime’s Social Security Organization, or the governor’s office and protested against their living conditions and unpaid wages. The demonstrators also demanded a revision in formulas to equalizing salaries and the paying off of the State’s debts to the Social Security Administration.

Mrs. Maryam Rajavi, the President-elect of the National Council of Resistance of Iran (NCRI), saluted the deprived protesters and said that by chanting the slogan “Only by taking it to the streets, we can obtain our rights,” the retirees pledged to continue their protests. Indeed, the only way to end poverty and inflation is to revolt against the religious fascism and establish freedom and justice in Iran.

Secretariat of the National Council of Resistance of Iran (NCRI)
January 27, 2021