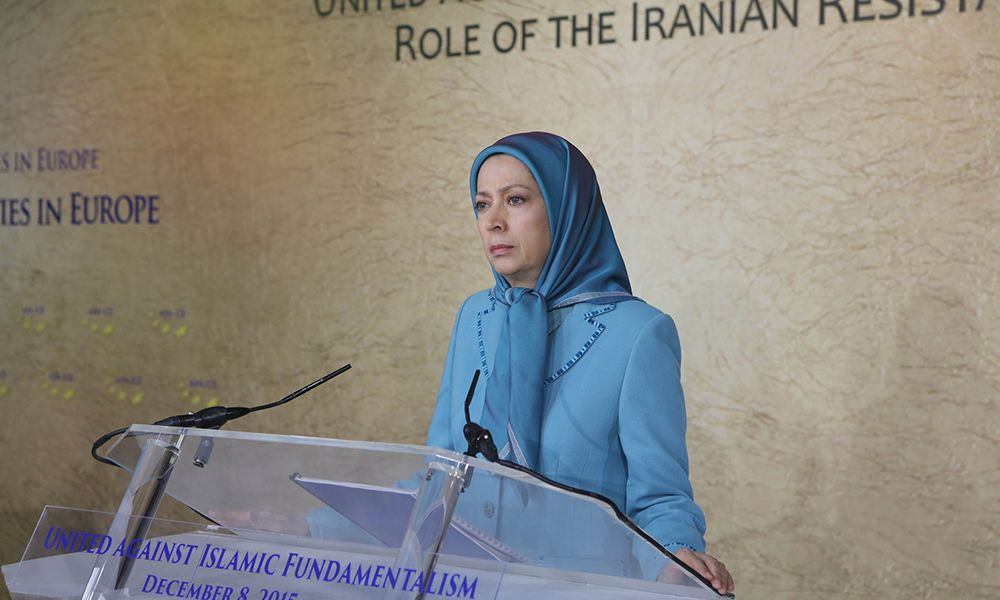 Maryam Rajavi: Stolen human rights and freedom in Iran can be reestablished
with struggle and uprising

On the eve of the International Human Rights Day, the Union of Iranian Associations in Europe sponsored a meeting on Tuesday, December 8, in the presence of Iranian Resistance’s President-elect Maryam Rajavi, and featuring Senator Joseph Lieberman, former US presidential candidate, and Professor Alejo Vidal Quadras, Vice President of the European Parliament, 1999-2014.
In the meeting entitled, “United Against Fundamentalism, Role of Iranian Resistance”, Maryam Rajavi drew attention to and warned against the efforts of the Iranian regime and its allies to save the Assad regime. She said:
Greetings to all of you. Let me express my appreciation as well as those of PMOI members in Camp Liberty and our compatriots in Iran to Senator Lieberman.
His presence represents the American people’s friendship for the people of Iran and a big front of high-ranking US personalities who advocate a correct Iran policy, one that is devoid of appeasement of the religious dictatorship; he also represents the friendship and respect among followers of all religions.
We salute him.
I would also like to welcome representatives of the Iranian communities in Europe.
These communities include experts, artists, businessmen and those who represent the true desires of the Iranian people for democracy and progress.
This meeting on the eve of the International Human Rights Day is particularly important for our people who live under one of the most oppressive regimes of our time.
We honor the International Human Rights Day by paying respect to all brave men and courageous women in Iran and around the world who sacrificed their lives or have risen up to bring human rights and democratic freedoms to oppressed nations.
For the people of Iran this day is a reminder of 120,000 martyrs of PMOI and other victims of execution under religious fascism including 30,000 prisoners massacred in 1988 and all the political prisoners executed in recent years, as well as those slain in camps Ashraf and Liberty particularly the 24 freedom fighters who lost their lives last month in a rocket attack at the behest of the clerical regime.
Yes, this day is a reminder that our people’s human rights are being stoned in Iran.
It is a reminder that today the Iranian people do not have the right to live free and have no safeguards against arbitrary arrests, torture and harassment.
It reminds us that they are deprived of any comfort or security, that they do not have the right to freely choose what they wear, that their right to freedom of belief, conscience and religion has been taken away from them, that they are deprived of the right to freely hold social gatherings; and the right to a free election in order to establish the representative government they deserve.
Therefore, the International Human Rights Day is a reminder that the Iranian nation is entitled “as a last resort to rebellion against tyranny and oppression” to overthrow the religious dictatorship ruling Iran and to replace it with a government based on freedom, democracy and equality.
I sincerely hail my fellow compatriots who have risen up these days outside Evin Prison and other government centers to protest the arrests, executions and stepped up pressure on political prisoners.
Yes, we must earn our rights.
And we must gain back our hijacked freedoms and human rights with our own struggle and uprisings.
Unfortunately, based on illegitimate considerations, particularly during the nuclear negotiations and agreement with Tehran’s oppressive regime, Western governments turned a blind eye on the flagrant violations of human rights in Iran including the 2,000 executions under Rouhani.
After signing the agreement, they sent large political and commercial delegations to Iran one after the other to win a share of Iran’s market after sanctions are lifted.
Since the nuclear agreement in July 2015, the regime has hanged a large number of prisoners in Iran and has intensified its warmongering and bloodshed throughout the region.
We call on Western governments to review their policy that has so far contributed to instability in the region and reinforced the main threat to global peace and security and to make their relations with the Iranian regime dependent on end to executions and torture, and freedom of political prisoners.
Iran’s clerical regime has been condemned 62 times so far by various United Nations agencies for its gross violation of human rights in Iran.
In addition, the regime and Khamenei himself, are directly responsible for the massacre of 300,000 Syrians in the past four years and displacement of more than half of the population; they are also directly responsible for the genocide of Sunnis in Iraq by the Quds Force militias.
In view of these crimes, it is unacceptable that the Iranian regime’s file has not been referred to the UN Security Council.
It is the responsibility of the UN Security Council to make the necessary arrangements for prosecution of the leaders of the Iranian regime, particularly Khamenei, as perpetrators of these crimes in an international court.

Dear friends,
In recent days, another terrorist attack in California shocked the world.
On behalf of the Iranian Resistance, I condemn this crime and extend my condolences to the families of the victims.
Like the November 13 massacre in Paris, this shooting also took place under the banner of Islam, while Islam is shocked by such barbarism.
Iran’s mullahs massacred 30,000 political prisoners in 1988 under the name of Islam.
Those who massacred unarmed people in concert halls and health centers are all of the same ideology.
Indeed, all religions have been sent to free mankind from all forms of oppression.
All of us are sisters and brothers. We are all children of Abraham.
What binds us is not hate, tyranny or oppression, but liberty, compassion and unity.
We say there is no dispute between Shiites and Sunnis, Muslims and Christians, or nations of the Middle East and West or their cultures.
The dispute, however, is between ruling dictatorships and nations who seek freedom.
Anyone who claims to be Muslim must stand up to Bashar Assad and Khamenei, and not kill innocent people.
I must repeat that the solution to this paradox is at the hands of the people of the region to struggle against extremists particularly with an alternative that is based on democratic and tolerant Islam.
Their resolve and struggle will definitely put an end to the dictatorships that have created and promoted fundamentalism.
Therefore we warn everyone about the efforts of the Iranian regime and its allies to save the Assad regime and cover up the consequences of Tehran’s failed strategy.
In the past weeks, the governments of US, France and Turkey officially confirmed that the Bashar Assad regime buys oil from Daesh.
On the other hand, there is no doubt that Assad’s financial resources are always restored by the Iranian regime.
So the mullahs of Tehran through Bashar Assad finance the genocides by Daesh.
Yes, Daesh has found the opportunity to grow and expand with the support of Bashar Assad, and it will not be destroyed with Assad in power.
This calls for Western governments to adopt a policy that supports the desires of the innocent people of Syria for a speedy overthrow of Bashar Assad, gives substantial backing to the Free Army of Syria in its struggle against the regime, and insists on the eviction of foreign troops, specifically the Iranian Revolutionary Guards Corps (IRGC) from Syria and Iraq.
I thank you all.