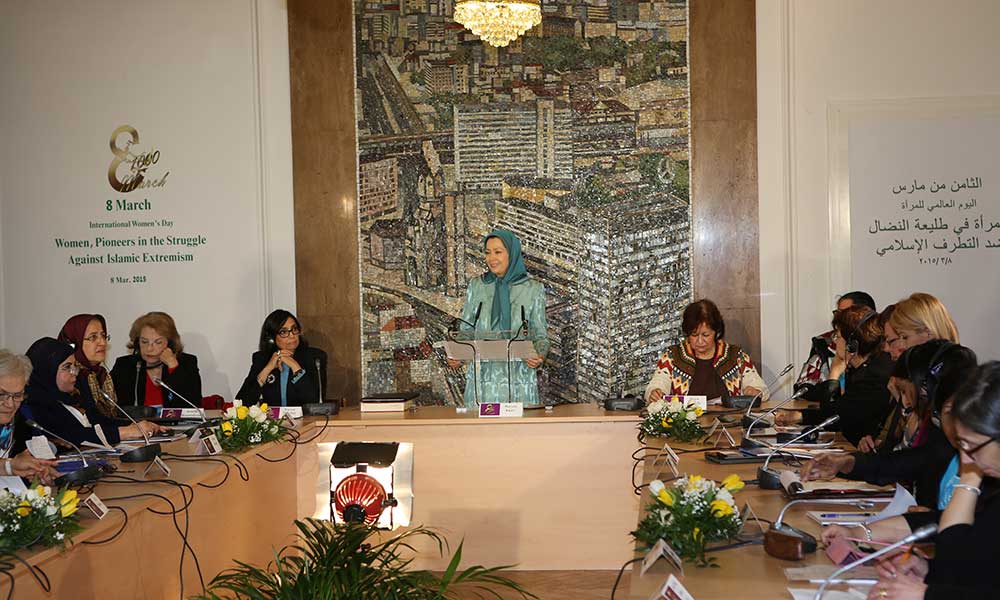 On International Women’s Day, I congratulate you, who have joined us from different countries,

Despite the mullahs’ regime dictatorial and misogynous conduct in Iran and the atrocities perpetrated by fundamentalists against our sisters in the Middle East and Africa, it is imperative that we congratulate each other on International Women’s Day, this year, more than any other year.

Because the power of women in the movement for freedom and equality in Iran and elsewhere around the world is the burning torch for all those who say no to dictatorship, to retrogression and to discrimination and are determined to eradicate them.

In the past year, Muslim and Arab women, especially in Syria and Iraq, have come face-to-face with major challenges to their lives and destiny.

For all of us, it is an imperative to understand the realities about the fundamentalists’ misogyny and the role women play in confronting it.

This is particularly the case because the 36-year conduct of the fundamentalists in Iran is being repeated in other countries by groups that follow them.

In the conference yesterday, I tried to briefly provide an answer to the question about the solution to fundamentalism. Today, I want to discuss fundamentalism based on the Iranian experience.

The first important reality is that misogyny is one of the major attributes of the fundamentalist dictatorship ruling Iran.

On the anniversary of March 8th following the anti-monarchic revolution, Khomeini’s betrayal of the Iranian people’s revolution manifested its odious face in the streets of Tehran as his thugs clamped down on women while calling for compulsory veiling and chanting “either the veil or a hit on the head.” The same day, women in the ranks of the People’s Mojahedin, while wearing head scarves, stood shoulder-to-shoulder with their sisters and challenged Khomeini’s club-wielders.

Since then, Iranian women have been targeted with the most savage oppression and the most despicable humiliation and discrimination.

The torture and execution of tens of thousands of women in the ranks of the Mojahedin and other opposition groups, the overwhelming majority of them Muslim, was astounding and unprecedented.

As far as civil liberties and individual and social rights are concerned, this regime has continuously undermined the status of women by violating international conventions, especially the Convention on the Elimination of All Forms of Discrimination Against Women.

Humiliation, detention and flogging to impose compulsory veiling on women are part and parcel of the regime’s laws.

Last year, the mullahs’ Supreme Leader, Khamenei, said that the notion of gender equality was a mistake. “We must totally distance ourselves from the Western way of thinking on issues such as employment and gender equality,” he stressed.

Accordingly, since three years ago, women have prohibited from enrolling in 70 fields of study in the universities, which represented a doubly restrictive compared to the period before the ban.

In addition, oppressive policies and guidelines are increasingly implemented to further push women into the home. Work and employment opportunities are continuously being closed off to Iranian women. For this reason, women’s share of the labor force in Iran is only 16 percent. This is while, according to government figures, more than three million women are bread winners in their families and most suffer from agonizing poverty.

On the other hand, the Supreme Leader has ordered the implementation of a plan for population growth. To this end, certain laws were adopted which prohibit the hiring of single men and women, and pressure women employees to have more children. The first and most important practical impact of this plan is to marginalize women.

Women are denied most social rights and freedoms. They are even prevented from watching sports games in stadiums and from singing in public. They are being eliminated from social activities. And they are even being controlled and interrogated over the most private aspects of their lives.

The second important reality is that misogyny is at the core of suppression against society as a whole, since preserving the ruling theocracy is predicated on it.

Such misogyny does not arise from blind, religious zealotry or trying to safeguard societal chastity, or even preserving the foundation of the family.

Misogyny under the cloak of religion has become systematic and persistent because it is a lever to maintain the monopolistic domination of the velayat-e faqih.

Misogyny is the raison d’être for dozens of the regime’s suppressive agencies.

This justifies the permanent surveillance operations in the streets, the actions of street patrols and the conduct of such agencies as “The Office to Combat Vice,” or “The Morality Police Force” and 20 other police entities.

Similarly, clamping down on women on the pretext of mal-veiling is one of the most effective means to repress society and silence any voice of dissent.

Last Autumn, in Isfahan the mullahs demonstrated their barbarism and savagery by splashing acid on the faces of women.

The mullahs have no scruples in enchaining women on so-called religious grounds.

In other words, they have a free rein in scrutinizing and controlling everything, everywhere, including in sports, administrative and production settings, in hiring or firing, in constantly controlling women’s and youths’ commute in the streets, in arbitrary raids on people’s homes, in censoring books, movies, theater and music, in filtering websites and social media, in fabricating judicial cases and in attacking parties.

This explains why enforcing the hejab has gained such prominence in the regime’s policies and laws.

This explains why the mullahs openly equate a “mal-veiled” woman with being counterrevolutionary.

This explains why whenever the regime suffers a political setback on the international scene, or whenever it faces social protests and uprisings, it steps up executions and intensifies the campaign against mal-veiling.

The regime’s President Hassan Rouhani said that compulsory veiling was linked to the regime’s survival. “Hejab is necessary for security,” he said.

The ruling mullahs are fully aware that if they show leniency vis-à-vis compulsory veiling or modify any of their laws and policies that oppress women, the latter’s power will quickly advance and mobilize society.

Indeed, the need to ensure that the velayat-e faqih regime is secure is the second important reality that helps us understand the reason for the mullahs’ misogynous mindset.

The third important reality is that the mullahs’ regime sees the yearning for freedom and equality as the most significant societal threat to its existence. And this is one of the most important reasons for the mullahs’ vengeance towards women.

What happened during the 1979 uprising against the Shah’s dictatorship was similar to the Arab Spring and the recent uprisings in the Middle East against dictatorship and corruption.

Amid all this, women, who have historically suffered discrimination and humiliation, have had the greatest and the most fundamental demands. And they continue to have them, namely equality and emancipation.

This is particularly the case because we are living at an age when society’s real progress would only be possible through gender equality.

As such, women’s demands and their perseverance pose the greatest threat to the Iranian regime, which explains why the religious dictatorship ruling Iran is the record holder in the execution of women political activists in the contemporary era.

A year after the resistance against the mullahs began in Iran, some three decades ago, thousands of women were imprisoned. In subsequent years, the mullahs perpetrated every conceivable crime against women, but Iranian women did not surrender.

This is the most important and honorable outcome of Iranian women’s confrontation against the velayat-e faqih regime.

Suppression is continuing, but the mullahs have failed to impose their reactionary practices on Iranian women.

Laws on compulsory veiling continue to be implemented, but Iranian women have resisted it and clashes with suppressive forces are on the rise.

Repression is omnipresent, but has failed to thwart Iranian women in raising their demands.

And Iranian women’s most urgent demand is change in the status quo, namely the overthrow of the velayat-e faqih regime.

Indeed, in their showdown with a regime which has always sought to humiliate and eliminate Iranian women, the presence of 1,000 women in the PMOI’s Central Council, who are leading the fight against religious fascism, is the most obvious affirmation of women’s critical role and their sense of responsibility and competence in Iranian society.

The role of women in the Iranian Resistance, especially in Ashraf and Liberty, has been the decisive in the Iranian women’s confrontation with the misogynous and inhuman ruling regime.

This is the role model for perseverance, which calls on all women to fight for freedom and equality and to take on the responsibility of liberating the society as a whole.

I also want to underscore the great responsibility which women throughout the Middle East region must assume.

The current historic confrontation has created a situation where the responsibility of women has gone far beyond their own struggle for freedom and equality. Today, the great responsibility of saving the nations of the Middle East from the evil of fundamentalism rests on the shoulders of women.

In this struggle, women’s biggest weapon, their greatest capacity and resource, is their ever-stronger solidarity and bond among themselves.

Despite different religions and nationalities, despite a variety of beliefs and cultures and despite all the differences, what can create an extraordinarily effective force is women’s unity and solidarity.

Thus, I again call on you to form and expand a powerful front against Islamic fundamentalism, terrorism and barbarism masquerading as Islam.

From the bottom of my heart I hope and am confident that although today darkness and gloom have befallen Iran and the Middle East, women’s struggle will herald a bright future, which will bestow the nations of this region with freedom, democracy and equality.