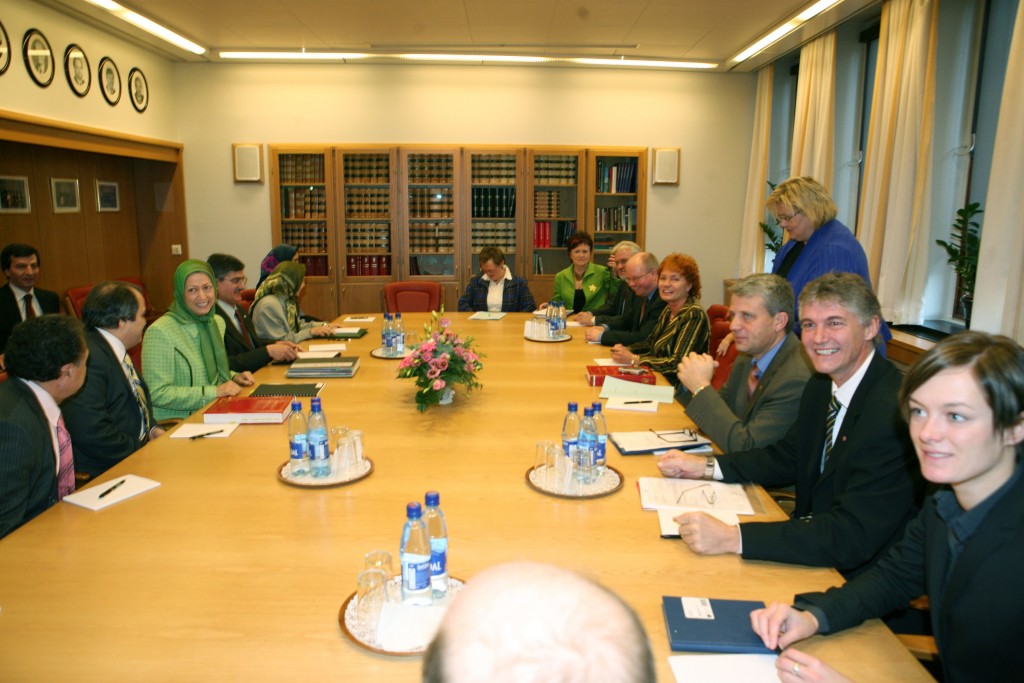 Meeting with members of the equality movement in Oslo

NCRI – Accomplishments of the Iranian Resistance regarding gender equality was addressed by Mrs. Maryam Rajavi in her meeting with members of the equality movement in Oslo on November 7.

The meeting was chaired by Mrs. Brit Ås, a distinguished Norwegian women’s rights movement personality, at the Red Cross building in Oslo. Parliament deputies, academics and women writers and activists were among participants in the meeting.

In her opening remarks, Mrs. Ås said she was delighted by Maryam Rajavi’s visit to Norway and reminded the participants that she had lost several members of her family in the fight for freedom of Iran.

Maryam Rajavi addressed the meeting by referring to the participation of women in the political and economic areas in Norway. “As you have experienced it in your country, development of the society depends on the status of women particularly on their participation in the managing the economy,” she said.

In Iran, we have experienced the contrary. Repression of women and all the measures barring their rights and freedoms have taken the society one step behind. This is something the Islamic fundamentalist regime brought to Iran.

Mrs. Rajavi reiterated that the participation of women in the Resistance from all walks of life was the source of this movement’s dynamism and driving force and allowed it to resist for a quarter of a century against a cruel repression.

She then enumerated the accomplishments of the Resistance owing to women’s leadership and its vision of an Iran liberated from religious dictatorship:

1- In tomorrow’s Iran, all rights of women for freedom will be officially recognized, such as freedom of choosing dresses, freedom of opinion, religion, jobs and travel.
2- We believe in total equality of social, political, economic and cultural rights between women and men.
3- Women will take part equally in political leadership of the society.
4- Women will freely choose their spouse. Any restrictions in their family life will be forbidden.
5- Women will enjoy equal right to divorce.
6- Polygamy will be banned.
7- Any physical, sexual or psychological assault against women will be considered as a crime.
8- The women victims of violence will have access to judicial authorities.
9- Any sexual exploitation of women under any pretext will be forbidden.
10- International conventions will become laws.

Maryam Rajavi called on Norwegian women to help the Resistance in condemning human rights abuses in Iran, particularly repression of women, and to support the brave women of Ashraf City, in Iraq, who are at the heart of this Resistance.

The next speaker, Bente Kerogård, lawyer and advocate of women‘s rights, said she was shocked by the extent of brutality against women in Iran. Western women, she noted, could not imagine the state of Iranian women and that their lives are entirely controlled by other persons. The final test to assess a regime is to see its approach to the weakest section of the society and the Iranian regime had failed this test, said Kerogård.

Mrs. Petersen from the Norwegian Association of Assistance in Women’s Affairs which is was founded a century ago in Norway, was the next speaker. She first expressed her feelings towards Iranians who welcomed Maryam Rajavi at the airport: “I was extremely moved by Iranians residing in Norway coming with their children to welcome you so warmly and who offered you flowers”. In reference to the speech of the resistance’s president-elect, she said that some governments had not signed the Convention on the Elimination of Discriminations against Women yet because of Article 2 regarding the right to life. According to her, it was very important that Mrs Rajavi’s speech focused on women’s rights. She finished her speech by wishing the Resistance success.

Next speaker, Anne Margrethe Larsen, a Liberal Party deputy and a member of the foreign affairs committee, said: “I have come to declare our support to the struggle of Maryam Rajavi. We support her, whatever the ambassador says. We live in a free country and we insist on that with all our might.

In conclusion she stressed: “Mrs Rajavi is a person glowing with hope and strength capable of attracting people’s support. We have to wonder why she had been concealed to us up to now.” She believed that the Resistance movement should be introduced on a wider scale, particularly the role she plays to attain women’s rights and freedom and establishment of equality between men and women in Iran.