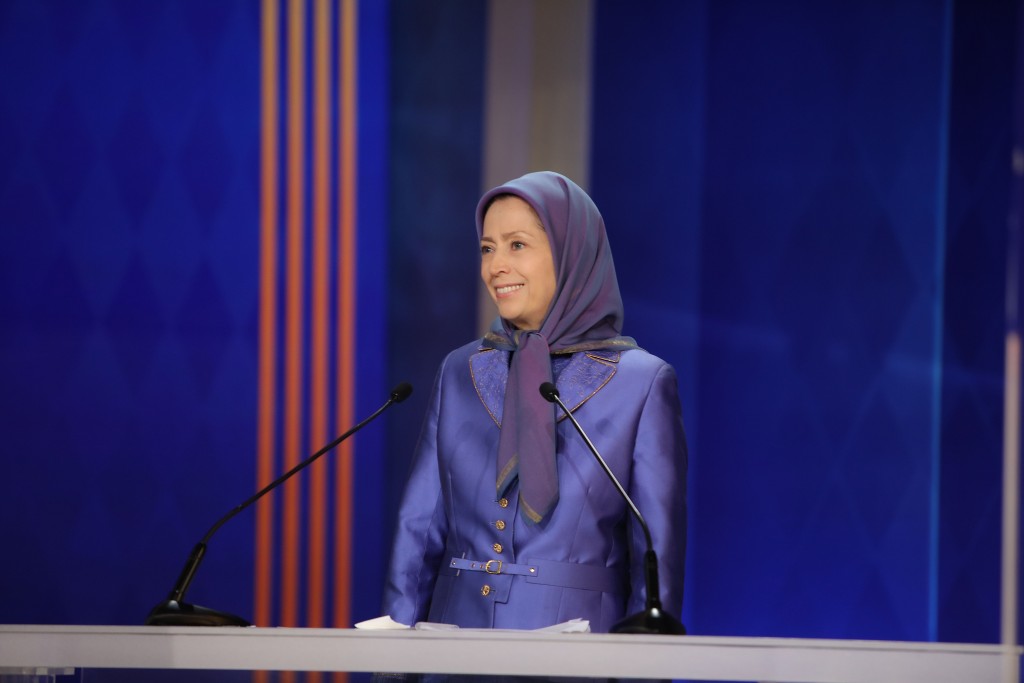 Maryam Rajavi’s remarks concluding the historic meeting of 1,000 former political prisoners of the Shah and the mullahs

Sisters and brothers,
Dear compatriots,
As we mark the second anniversary of the November 2019 uprising against the clerical regime, let us salute its martyrs, the 30,000 political prisoners massacred in 1988, and all the heroes who have laid down their lives over the past four decades.
The flames of the November 2019 blood-soaked and massacred uprising have not and will never be extinguished. The protesters were massacred. Nevertheless, the 1,500 young souls and teenagers whose hearts were pierced by the barrage of bullets in the streets, alleys, and marshlands will rise again in the form of an immense army with countless soldiers. And the fight will continue until more uprisings erupt, until the masterminds and perpetrators of all massacres are prosecuted, and until religious fascism in Iran is overthrown.

Your gathering today, which pays tribute to the November 2019 uprising carries a special message. Your message, the 1,000 former political prisoners under the Shah and the mullahs, is that seeking justice for the victims of the 1988 massacre is the same as rising up for the mullahs’ overthrow. From the prisons’ death corridors to the streets of Tehran, Tabriz, Ahvaz, and Isfahan, the Mojahedin (PMOI/MEK) will never give up on this objective until Iran is liberated.
As the Iranian Resistance Leader Massoud Rajavi pointed out, you are the pioneers of 500,000 tortured political prisoners; you have held aloft the flag of defending the victims’ suffering and sacrifice. You have kept alive the memories of the 30,000 red roses who belonged to a resistance movement for freedom.
Yes, you are the voice of those massacred. You are the determined followers of the steadfast PMOI members. You have risen for the ultimate day when the Iranian people’s call for justice is realized, and the regime is overthrown.
Your testimonies during the trial of a perpetrator of the massacre – whether in Sweden or Albania – represent an achievement for the Call for Justice Movement. Without the presence of the PMOI/MEK and its loyal supporters in this trail, the case would have undoubtedly taken another course.
Because of the significance of these testimonies, the Stockholm Court transferred its hearing to Durrës. The presiding judge said in Stockholm, “Based on the existing information and evidence, those witnesses are considered decisive for the deliberations in this case.”
Indeed, being decisive is the essence of the PMOI’s role in more than four decades of struggle against religious despotism.
In light of what you did, the mullahs can no longer evade punishment for the genocide and crime against humanity they perpetrated. The efforts by the notorious Intelligence Ministry and its operatives to distort the identities of the massacred PMOI prisoners have failed.
The PMOI prisoners, who comprised more than 90% of the massacred victims, remained steadfast, further inspiring the Iranian society to resist and rebel.
According to one witness, one of the henchmen in Gohardasht Prison, Mohammad Moghiseh (aka Nasserian), had said, “I do not know what that PMOI has done to you! They saw the hanging noose; they saw us hanging their friends, but not a single one of them (i.e., the PMOI prisoners who stood their ground) accepted to repent and express remorse!”
Another witness said about the resistance of Simin Hojabr, only 17 at the time of the arrest. The henchmen tortured Simin, demanding information about her comrades. Simin, however, did not say a word despite vicious flogging. The desperate henchman yelled out, “At least say, ‘I don’t know!’” And Simin cried out, “I know, but I won’t tell you!”
Truly, the historic “no” by the massacred Mojahedin created an eternal epic.
The famous French poet Louis Aragon has a poem describing them:
Think of those who put their living fingers, their hands of flesh, into the gear for that to change. And think of those who did not even discuss their cage.

The Shah and the mullahs sought to conceal everything with lies and silence. But you disrupted their plans.
You endured the pain and suffering of long years of incarceration, particularly under the mullahs, enduring the residential units, the cages, and the coffins, as you just mentioned. (1) You shouldered the responsibility to inform the world of those shining stars in the gloomy nights of your country.
In the fall of 1988, the late Simin Behbahani, wrote:
The lunatic setup fire and burned multitudes of prisoners
Where are their ashes? So that the wind could bring them to us
No stones, no graves, no written papers,
Who would ever remember their names?
No, no! Those pure souls would lighten up the skies
A star would bring their news every night. 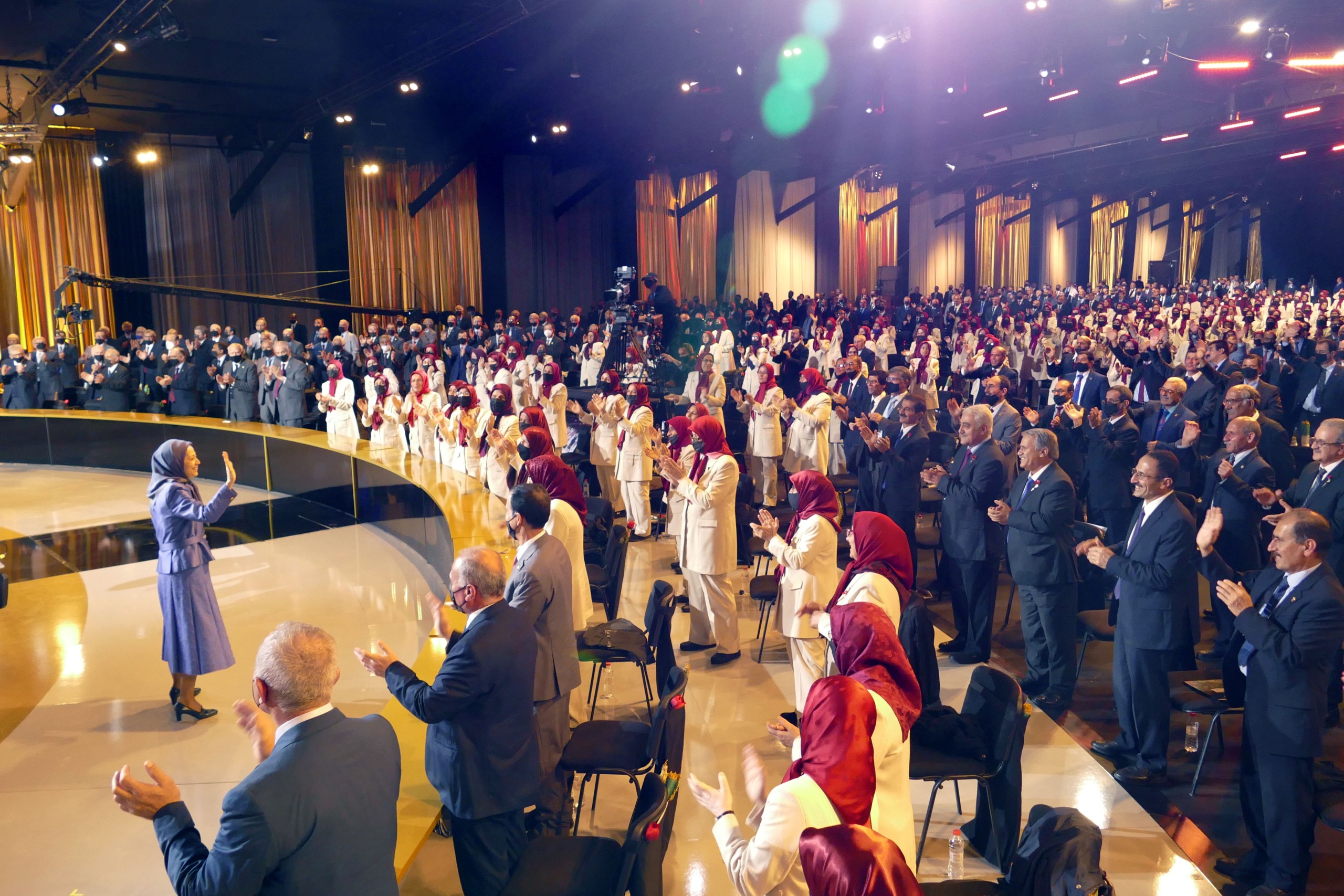 Khamenei and Raisi, masterminds of the November 2019 slaughter

We have now reached yet another anniversary of the November 2019 uprising. The blazing call for justice to overthrow the regime; the day of the thunderous outburst of the Iranian people’s rage; the day when the enlightened and combatant youths demolished some 900 regime centers in 200 cities across the country in just 48 hours.
It was a day when rebellious cities were liberated from the clutches of the mullahs and the IRGC, and the enchained nation tasted freedom for continuous hours. It was a day of rehearsing the overthrow of the regime. As Massoud Rajavi said, “The Liberation Army’s victorious strategy was tested in the rebellious neighborhoods and cities.”
We extend our endless salutes to the fearless brave men and women who confronted the oppressive and ruthless monster with empty hands and taught them an unforgettable lesson. We salute those rebellious youth, who shattered the wall of fear and terror and terrified the IRGC.
We send them our most profound greetings. We hail those riddled with bullets in the marshlands of Taleqani Township in Mahshahr. We salute the pure souls whose bodies were thrown in water canals and those who were shot from helicopters. We salute the brave youths and teenagers in Shiraz, Islamshahr, Shahriar, Qal’eh Hassan Khan, Kermanshah, Ahvaz, and Karaj. We hail them all a thousand times.
It is common knowledge that the clerical regime’s leaders ordered the bloody crackdown on the uprising. Ali Khamenei, Ebrahim Raisi, and other regime leaders can never escape prosecution and punishment. The Iranian people and Resistance will never give up on this goal. And no one can ever silence the cries of the brave mothers of the martyrs of November.
These days, the invaluable and timely initiative, “The Iran Atrocities Aban Tribunal” set up through the unrelenting efforts of renowned human rights advocates, which prominent international lawyers and jurists are attending, is an extremely admirable and effective step to seek justice for the victims of the November 2019 uprising. We hope that the shocking testimonies of those injured and the victims’ relatives, as well as the detailed documentation of the events during the course of that vicious crime act as the precursor to the prosecution of its masterminds, namely the leaders of the clerical regime, before international tribunals and the courts of justice in a free Iran.

Consequences of the November 2019 uprising

The developments in the two years since the November 2019 uprising have proven certain realities:
1. The objective conditions for a democratic revolution and the overthrow of the clerical regime are riper than any other time. The country’s economy is paralyzed, and the vast majority of the population lives in poverty and starvation.
Khamenei deliberately left the door open for the spread of the coronavirus and banned the import of foreign vaccines. He wanted to contain society’s defiance, protests, and strikes by spreading death. However, the protest movement resurfaced with the uprising of the people of Baluchestan followed by the uprising of the thirsty people of Khuzestan, and protests by teachers, farmers, and workers nationwide.
2. The November uprising closed all paths to the regime and the only path left open was the regime’s overthrow. Why did Khamenei retrench, making his regime more fragile? Why did he pick Ebrahim Raisi, the henchman of the 1988 massacre, as president? Because the entire regime is in a critical and precarious situation. Now, Khamenei is in a mad dash by accelerating its missile and nuclear bomb-making projects to preserve his rule. But he has stepped into a path that will result in the uprising and the regime’s downfall. The regime has shown that it is no longer willing nor capable of either neutralizing or reducing the profound discontent in society.
3. The great November 2019 uprising and the subsequent two years put the spotlight on the revolutionary nature of the protests. It lent credence to the strategy that relies on rebellious cities and resistance units.
The Resistance Units carried out their unrelenting activities and operations against repression. The network grew qualitatively and spread in cities across the country. The protest movement moved on to become organized, paving the road to establishing the Great Army of Liberation.
The November 2019 uprising was a major onslaught by the enlightened and deprived youths.
This fighting force remains restless and restive in the heart of Iranian society. It is poised to challenge the Velayat-e Faqih regime again and again.
So, we say to the mullahs, do not venture a guess on the large number and reliability of your Revolutionary Guards and the Bassij. Nor venture a guess that your corrupt, money-hungry Revolutionary Guards could save your regime. Even if you mobilize all your Revolutionary Guards, intelligence agents and Bassij members, you would still be too insignificant in the face of the countless members of the Army of Freedom.
The November uprising was drenched in blood. But more formidable and ferocious uprisings are on the way. One can hear the footsteps of the blazing November uprising throughout Iran.
The army of the countless is on its way to realize the big dream of the people of Iran to obtain freedom.
Long live freedom
Hail to the courageous and rebellious protesters across Iran
And God bless you all.

1 - Horrendous methods of torture commonly practiced in the clerical regime’s prisons to break the prisoners.