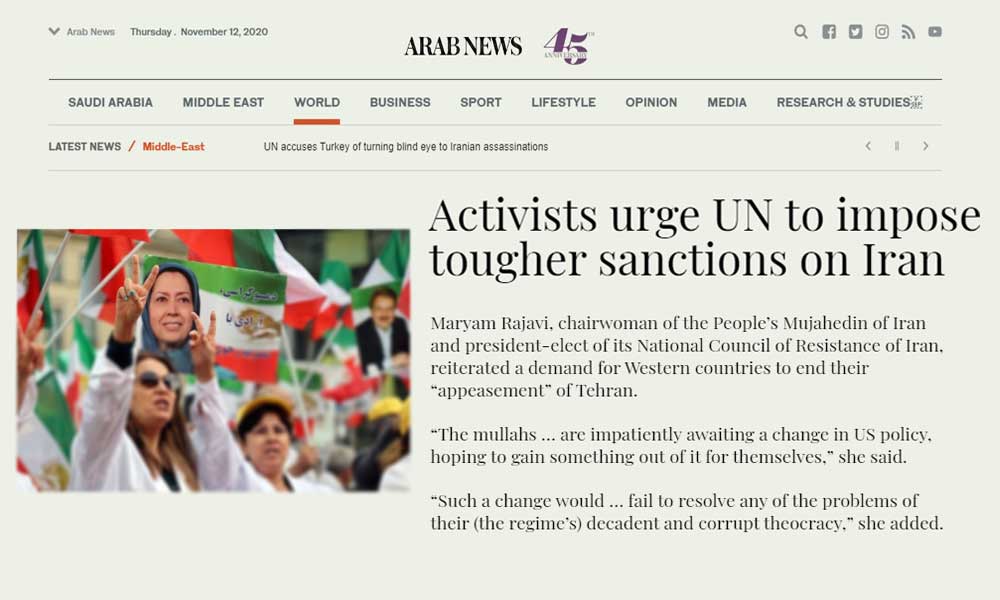 CHICAGO: A conference of Iranian expatriates from the US and Europe on Wednesday urged the UN to impose tougher sanctions on the regime in Tehran, and for Western nations to apply more pressure.
The call came as the expatriates commemorated the first anniversary of the regime’s massacre of more than 1,500 protesters.
Millions of Iranians, particularly young people, took to the streets last November demanding greater freedoms and regime change.

On the orders of Iran’s Supreme Leader Ali Khamenei, the Islamic Revolutionary Guard Corps (IRGC) shot and killed hundreds of demonstrators, including 23 children. About 12,000 people were arrested, many of whom were sentenced to death.

The expatriates were joined during the virtual conference by officials from the US State Department, European politicians and diplomats. Speaker after speaker urged the UN and Western nations to investigate the killing of protesters.

Maryam Rajavi, chairwoman of the People’s Mujahedin of Iran and president-elect of its National Council of Resistance of Iran, reiterated a demand for Western countries to end their “appeasement” of Tehran.

“The mullahs … are impatiently awaiting a change in US policy, hoping to gain something out of it for themselves,” she said.

“Such a change would … fail to resolve any of the problems of their (the regime’s) decadent and corrupt theocracy,” she added.

“The policy of appeasement can’t be repeated … The time is up for policies that stand with the mullahs. This policy will only reap harm and loss.”

Despite the brutal crackdown on dissidents last November, citizens in many Iranian cities launched a second wave of protests against the regime in January.

Rajavi said the development by the West of an effective policy on the regime is a pressing issue that must address the proliferation of ballistic missiles in Iran, its state sponsorship of terrorism, cyberwarfare and cybersecurity, Tehran’s disruptive regional conduct, and gross violations of human rights in the country.

“This is the beginning of the destruction of the foundations of the regime by the Iranian people and, ultimately, uprooting it. This will be finalized by the future protests and uprisings led by the great army of freedom,” she added. “To the heroic people and courageous youths of Iran, I say, ‘The ruling mullahs fear your power’.”

Matthew Offord, a British Conservative MP who represents the constituency of Hendon in London, echoed Rajavi’s demand for a UN investigation into the killing of protesters last year.

“I call on the UK government to work with international allies to refer the November 2019 uprising dossier to the UN Security Council for accountability for those responsible in an international tribunal,” he said.

“I also urge the UK to work with the US and the EU to send an international fact-finding mission to visit the regime’s prisons, and demand and take immediate action to secure the release of all political prisoners and individuals detained during the 2019 uprising.”

Mitchell Reiss, a former director of policy planning at the US State Department who was also special envoy to Northern Ireland during the peace process, urged conference attendees to speak out against the regime’s crimes.

“On this anniversary of the November 2019 uprising and at a time of transition in the United States, from the Trump to the Biden administration, it’s useful to reflect on recent trends and developments over the past few years, and what they suggest for the struggle between the Iranian people and the ruling theocracy in Tehran,” he said.

“From my perspective, the forces of freedom are gaining strength, both inside and outside Iran, while the forces of repression are weakening.”

Theresa Payton, who was chief information officer at the White House during the George W. Bush administration, said the international community must act now.

“The world needs to come together and dedicate ourselves to a bold, new approach. We can’t allow excuses anymore. This is the crisis of our time,” she added.

“If a coalition of international policymakers, technology and citizens act now, the overall future for the people of Iran, and the world, will take a more positive and different course.”