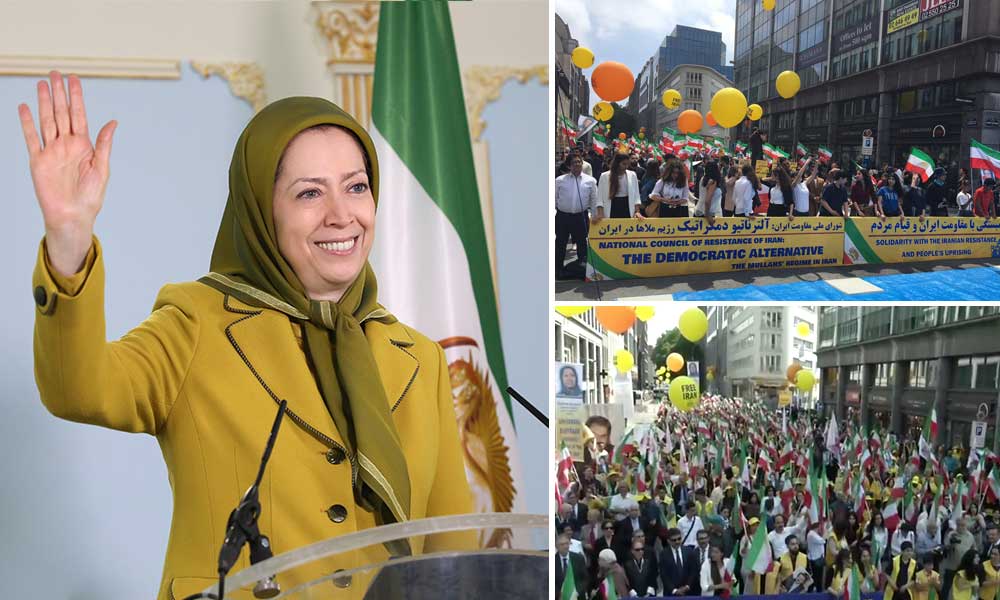 Thousands of Iranians gathered for a large protest demonstration in Brussels on Saturday, 15 June 2019. The protestors condemned the brutal violation of human rights by the ruling regime and its instigation of terrorism and warmongering in the region. They expressed support for the Iranian Resistance movement led by Maryam Rajavi.

The protestors will voice support for the People’s Mojahedin Organization of Iran (PMOI/MEK) and resistance units inside the country while marching on Schuman Roundabout.

My fellow citizens, Iranians longing for a free Iran,
Friends and supporters of the Iranian Resistance,
I salute you who are conveying at this moment the voice of an oppressed nation, a nation who has been subjugated and plundered, but has risen up.
I also salute the honorable dignitaries and long-time friends and supporters of the Iranian people’s Resistance, and the human rights advocates who have come from various European and Arab countries to stand by your side.

As we approach June 20, the anniversary of the onset of our historical resistance for freedom and popular sovereignty against the mullahs’ absolute dictatorship, the Day of Martyrs and Political Prisoners, and the founding anniversary of the National Liberation Army of Iran, your gathering today fans the flames of hope and symbolizes our national dignity and conscience.
It flies the flag of our nation’s proud steadfastness in the face of a vicious and reactionary regime. Your gathering today is the epitome of a glorious future towards which we are moving.
Freedom cannot be achieved unless you have a long line of selfless men and women firmly determined to persevere and resist for achieving freedom without having any personal interests or expecting any rewards for themselves.
Hail to the brave men and women of the resistance units and popular resistance councils who have formed this long line all across Iran. And hail to you who have extended this line to the heart of Europe in front of the European Union’s headquarters in Brussels.

Desire of Iranian people, the overthrow of the regime in its entirety

Dear compatriots, the decadent regime of the mullahs is surrounded by infuriated people fed up with the status quo, to the extent that just like the final days of the Shah’s regime, Majlis deputies openly express their alarm during the parliamentary sessions, and one after the other warn against the regime’s calamitous destiny.
They openly challenge the regime’s president and dare him to eat like the rest of the people for just one month to see if he can tolerate such conditions.
Rouhani and his ministers also say that the situation of the regime has never been so dire over the past 40 years.
At the helms, the white turbaned mullah (Rouhani) blames the black turbaned mullah (Khamenei) for the faults, demanding more authority. But Khamenei’s response was that they should prepare to convene a solid Hezbollahi government.
For the people of Iran, however, there is no difference between black turbans and white turbans. They want the overthrow of the entire regime and they cry out, “Our enemy is right here.”
Now, if anyone claims to be able to change the behavior of the mullahs’ religious fascist regime without budging on the human rights of the people of Iran and their right to sovereignty, we would happily welcome this option and encourage them to go ahead and change the regime’s behavior as much as they can.

Fellow citizens,
The polarization between the regime and anti-regime is being highlighted more and more as we approach the end of the clerical regime. The regime’s proponents and those who have interests in perpetuating its rule, encourage giving concessions and appeasing Iran’s ruling murderers projecting concern about the outbreak of a war.
As Massoud Rajavi says, those concerned about the fate of the Iranian regime keep warning against the outbreak of a war at any decisive juncture. “While the worst likely mistake for the U.S. and international community to make with regards to the clerical regime is trying to avoid a war.”
He adds, “Four decades of experience prove that the worst mistake is budging and hesitating to hit the head of the serpent with a rock. Without this, i.e. overthrowing this regime, Iran could not be freed. And this is a duty solely on the shoulders of the Iranian people and their Resistance. Therefore, it is imperative to recognize the right of the people of Iran to resist against and overthrow the mullahs’ regime.”
The regime’s solution to preserve their rule amidst such terminal crisis has been to demonize the PMOI/MEK and the Iranian Resistance as their main existential threat, an effort which has led to terrorism.
By demonizing the Mojahedin, the regime seeks to arrange the scene such that everyone would conclude that the clerical regime is better and is what the Iranian people deserve. So, they would be better off to give up resistance and continue their life in misery.

Call to the European Union

The terrorist operations in Europe, the attempted bombings in Albania and France, the arrests of the Iranian regime’s mercenaries and its terrorist diplomat Assadollah Assadi, and the expulsions of another four of the regime’s terrorist diplomats over the past year, all verified the Iranian Resistance’s repeated disclosures that the Iranian regime’s embassies in Europe are all centers for planning and carrying out the regime’s criminal plots.
We demand that the regime’s terrorist diplomat arrested in Belgium be prosecuted as soon as possible. This is the right of Iranian refugees to learn the details of the mullahs’ terrorist plots in foreign countries. And this is the requisite to any effort to prevent similar incidents in future.
We call on the European Union to impose comprehensive sanctions on the theocratic regime ruling Iran, and to designate the mullahs’ Revolutionary Guard Corps (IRGC) and their Ministry of Intelligence (MOIS) as terrorist entities. The regime’s mercenaries must be tried, punished and expelled.
The regime’s leaders must face justice in an international tribunal and account for their crimes against the people of Iran and particularly the massacre of political prisoners in 1988.

Dear friends,
The sensitivity of the present juncture and the increasing weakening of the clerical regime place the burden of responsibility on the shoulders of each and every one of us. Beyond the shadow of a doubt, the ruling regime cannot withstand our nation’s resistance and uprisings and their great Army of Freedom.
Hail to freedom
Hail to all of you
Hail to the Great Mojahed Reza Rezaii on the anniversary of his martyrdom on June 15, 1973, under the Shah’s monarchic dictatorship 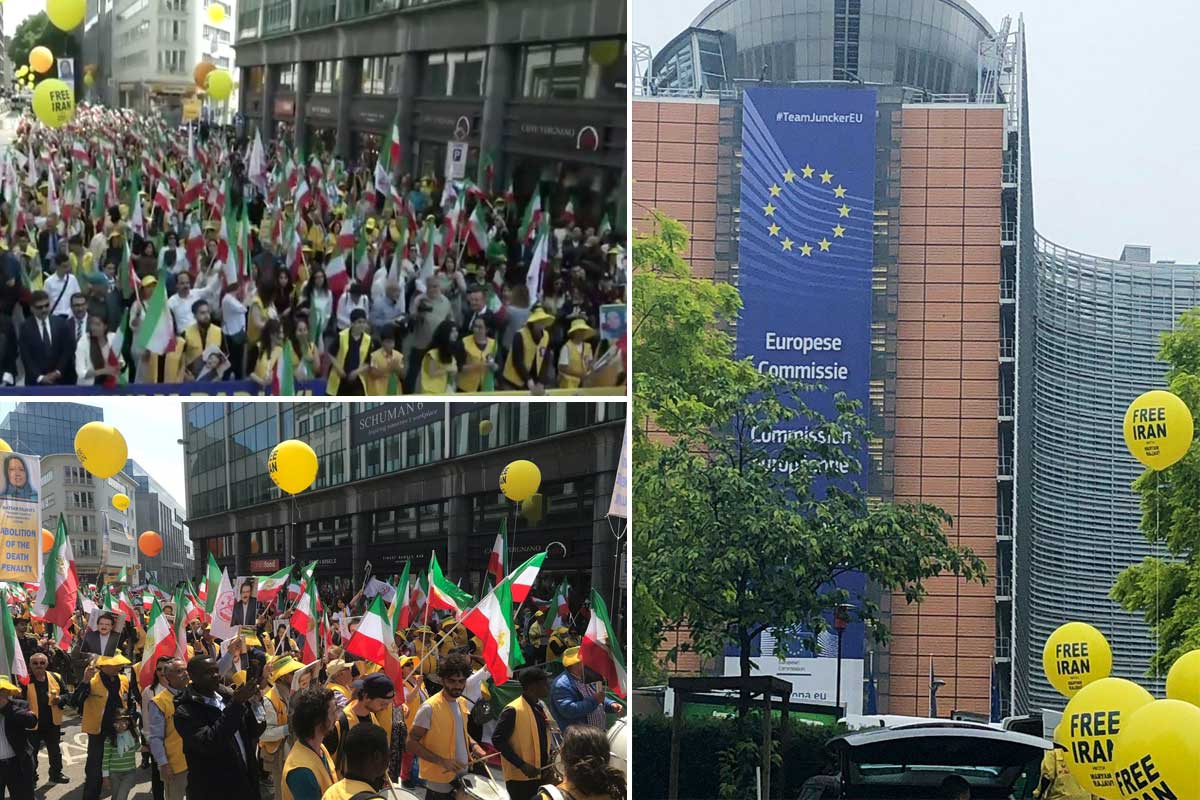