Conference at the National Assembly of France Maryam Rajavi’s speech 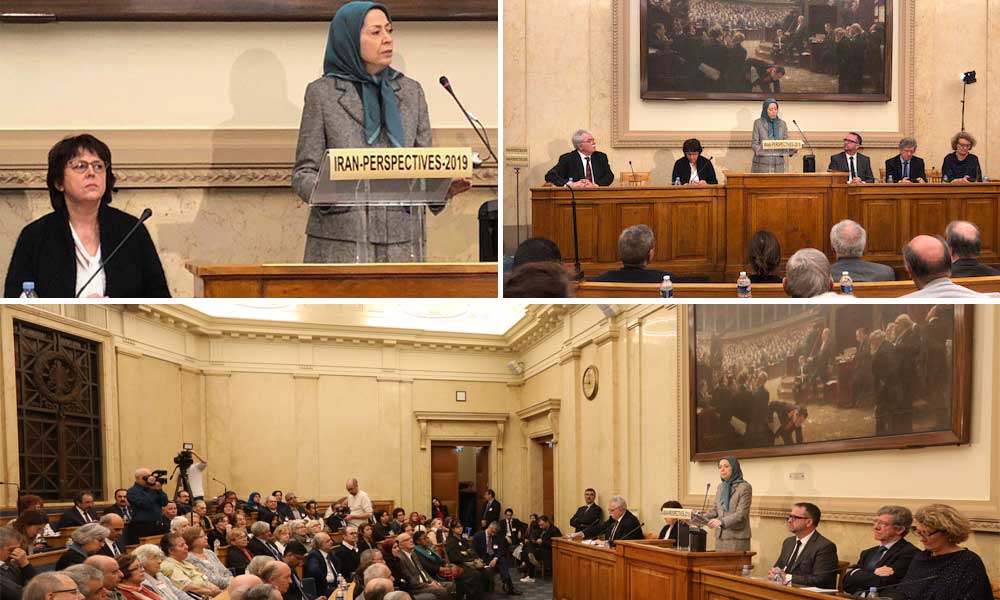 Maryam Rajavi: Respecting the Iranian people’s struggle for freedom is indispensable to a responsible European policy

Madam President, honorable representatives, dear friends!
First of all, I would like to thank the Parliamentary Committee for a Democratic Iran for sponsoring this meeting. I would also like to extend my special gratitude to this committee for its enlightening and progressive positions on the issues dealing with Iran.

In mid-February, all eyes turned to Iran. Not only the opposition, but all observers also agree that the Iranian regime celebrated its 40th anniversary in an unprecedented state of instability. And that the regime’s overthrow which is the desire of the people of Iran has never been so much within reach. Similarly, the illusions about moderation of the regime had never been proven so invalid as they have today.

In 2013, when Rouhani took office as the clerical regime’s president, there were quite a few people in western political circles who saw him as a “moderate” able to bring about positive change in the theocratic regime. It was under this pretext, that western governments gave great concessions to the mullahs’ religious dictatorship.

The mullahs took advantage of those concessions in two ways: one, to further oppress the people of Iran, and two, to spread their war and terrorism in the Middle East.
Let’s take a look at Rouhani’s presidential record: Thousands of executions; several massacres in camps Ashraf and Liberty where members of the PMOI/MEK used to reside; wasting of Iran’s revenues on fomenting wars in the region; terrorist operations by the Ministry of Intelligence (MOIS) which he commands; and the missile program of the Revolutionary Guard Corps (IRGC). As a result of which the majority of the people of Iran have become destitute.

For a long time, proponents of the appeasement policy tried to differentiate between Rouhani and the Vali-e Faqih (Ali Khamenei). Last summer, however, Rouhani put an end to all such claims. He assigned his Ministry of Intelligence and diplomats to launch a major terrorist operation against the Iranian Resistance’s grand gathering in Villepinte. The sanctions imposed on the mullahs’ Intelligence Ministry by France and the European Union further confirmed that Rouhani’s government was the perpetrator of the plot.

Although their attack in France was ill-fated, they did not give up. They hatched further schemes. A terrorist plot in Denmark; an espionage and terrorist plot against members of the Iranian Resistance in the U.S.; espionage in the army of Germany and attacking the supporters of the Iranian Resistance in that country; and in March 2018, they failed in another major terrorist attack against a PMOI/MEK gathering in Albania.

The mullahs are badly in need of political and commercial relations with Europe. Nonetheless, they cannot forgo their terrorist operations in the heart of Europe. They hear the calls by France and the EU to stop their ballistic missile program, but they defiantly expand their missile program.
On February 11, 2019, Rouhani proclaimed, “We have never asked for anyone’s permission to build our various missiles and we will never do so.”

Why have the mullahs taken up this policy? The answer is because they are much weaker than we think and they do not know of any other way but to suppress and to create crisis.
Since December 2017, the Iranian people’s uprisings and nationwide protest movement have drastically destabilized the regime. The conflicts within the regime are on the rise; oil exports are dwindling; government revenues have plunged; the country’s assets are being taken abroad; the value of the country’s currency has dropped to one-third; inflation is 40 per cent; the economic growth rate is -4; and the unemployment rate is 40 per cent. These are the characteristics of the Iranian economy in the present circumstances. It is reminiscent of a building on the verge of collapse. Nevertheless, the regime has increased its next year’s budget for military and security expenditures.

Dear friends,
Amidst all this, a significant development has taken place in Iran. A new force has emerged to counter the mullahs, the Resistance Units. These units are made up of members and supporters of the Iranian Resistance. They come from among the younger and freedom-loving generation of Iranians. They are from the same generation that started the uprisings in December 2017 and keeps them going.
In the past year, the Resistance Units have spread their anti-regime activities to dozens of cities across the country. They have turned into beacons of hope for the people of Iran.

The question is, what the reaction of the mullahs has been to this menace?
In addition to their terrorist plots, the mullahs have consistently been spreading falsities against the Iranian Resistance. Let’s look at the December 9, 2018, edition of the state-run daily, Siyasat-e Rooz (Daily Politics). The mullahs have reached a point where they dare to say that the French President has obliged the PMOI/MEK to suppress the people of France. These are the exact same allegations they made against the PMOI/MEK in Iraq, that they were involved in the suppression of Shiites and Kurds.
In 2018, they have produced and broadcast 126 movies and TV series against the PMOI/MEK.
Why? What’s wrong? Yes, they are extremely concerned about the role and impact of the PMOI/MEK in the uprisings.

The theocratic regime ruling Iran spends exorbitant sums of money on creating a network of reporters who are friends of the Ministry of Intelligence. Through them, the regime deploys the foreign press against the Iranian Resistance to project that the regime does not have any alternatives and the interests of western countries are best served by dealing with their regime.

Dear friends,
Today, the religious dictatorship ruling Iran can no longer be described as “moderate.” Some people, however, have turned to other justifications.
They argue that isolating Tehran would only benefit its security apparatus.
They say, don’t pressure the regime, because they would step up their threats against Middle East countries.
They maintain that the regime has no alternatives and if it is overthrown, the Syrian scenario would be repeated in Iran.
And they claim that instead of being firm against the regime’s, it is better to continue negotiating with them.

Those who make such recommendations are actually seeking to give concessions to the mullahs. They are confronting the Iranian people’s desires and uprisings for regime change. In a word, they seek to preserve and protect the regime.
We saw that western governments gave a tremendous political and economic opportunity to the clerical regime by signing the nuclear deal in July 2015. But the mullahs used this opportunity to expand their wars in Syria and Yemen and to step up their crackdown on the people of Iran.

Tying hopes to investments in and commercial deals with Iran is an illusion. Even if the U.S. had not left the JCPOA, European companies would have had to leave Iran due to the enhanced instability of the regime.
It is wrong to worry about regime change by the Iranian people and resistance. Iran will not crumble in the course of such change. Rather, the main obstacle to Iran’s progress and the main cause of wars and crisis in the region will thus be removed.

Therefore, in your presence, the representatives of the people of France, I urge the French government to initiate a bold policy in the European Union.
An initiative that places France and Europe beside the people of Iran, and would respect the Iranian people’s struggle for freedom and democracy.
The right of the Iranian people’s Resistance to overthrow the mullahs’ religious dictatorship must be recognized.

This is the message of the Iranian people’s liberating uprisings and the Resistance Units.
I must stress that our Resistance is an accountable, dedicated and qualified movement which has a codified plan for the future of Iran.

We enjoy our people’s support in seeking to establish a republic based on the separation of religion and state, gender equality, abolition of the death penalty, an independent judiciary, autonomy for ethnic groups, a foreign policy based on peaceful co-existence, and a non-nuclear Iran.

And I thank you all very much. 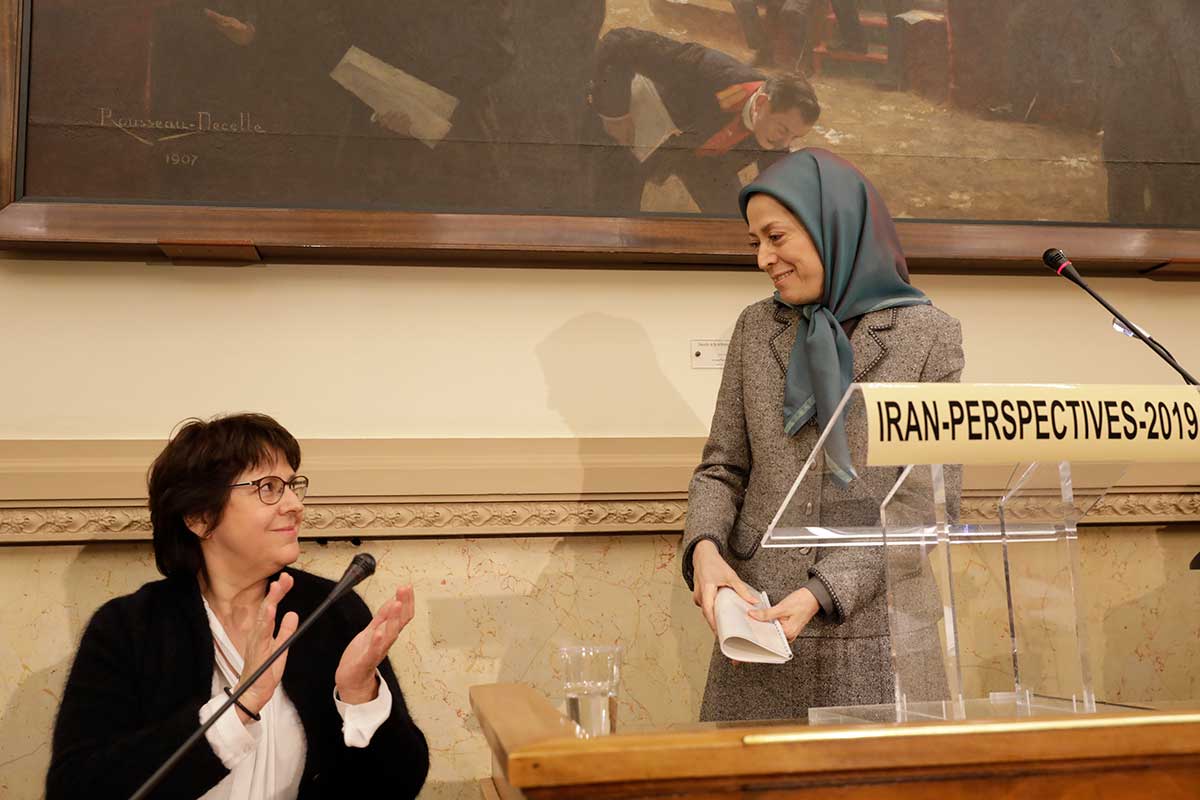