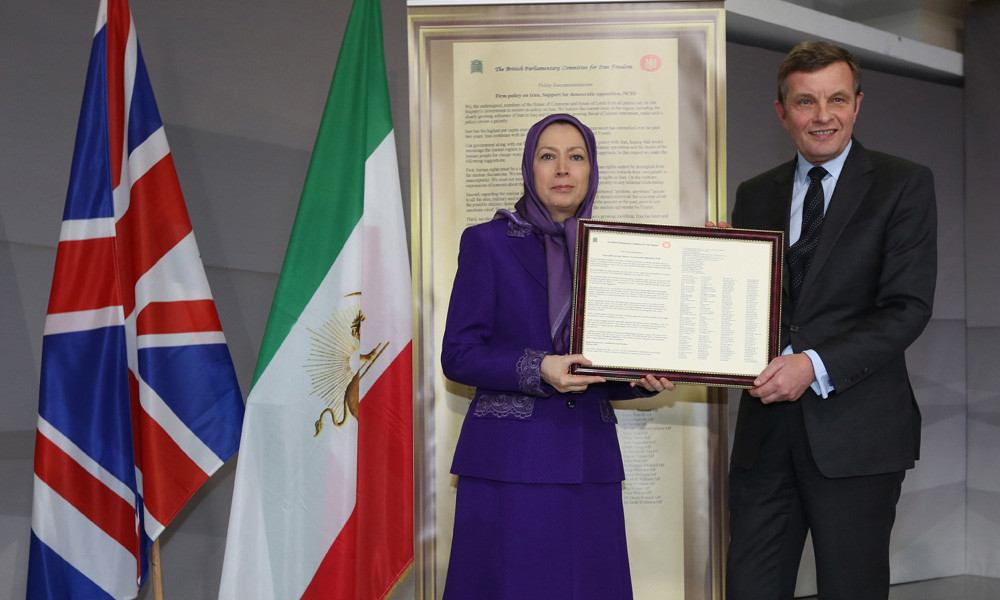 Maryam Rajavi: So long as the mullahs are in power, terrorism under the banner of Islam will continue to owe its existence to the regime

At a meeting attended by a delegation of eight British MPs and one member of the House of Lords with Maryam Rajavi, the British delegation on behalf of more than 200 cross-Party MPs and Peers called the UK government to adopt a firm policy towards Iran and make any improvement in bilateral relations conditioned on an end to human rights abuses and regional meddling. At this meeting, MaryamRajavi said:
Honorable David Jones,
Distinguished Members of the House of Commons and House of Lords,
You are most welcome!
I very much appreciate it that you have travelled here all the way from London.
Your concern about human rights and democracy in Iran and your emphasis on the role of the Iranian Resistance to bring freedom and democracy to Iran is truly commendable.
You are the standard bearers of the right policy in Europe vis-à-vis the most dangerous threat of our times, namely the theocracy ruling Iran.

You have shown great courage in defending this policy.
I know this has not been easy. At a time when governments are so engaged in appeasing the regime, it is very difficult to move in the opposite direction.
You are pressured, but this is the price one has to pay when standing up to such a misguided policy.
I would also like to commend you for your declaration on the need to adopt a decisive policy on Iran.
Years ago, we warned against the danger of nuclear mullahs.
Time and again, we revealed information about their secret nuclear program.
Western governments, however, did not deem it in their interest to heed our warnings until the mullahs moved so close to obtaining the bomb.
Fortunately, today, a nuclear agreement has been signed.
Although the deal has granted unnecessary concessions to the mullahs, the danger has been forestalled for a number of years.

It was proven that the warnings of the Iranian Resistance and the British Parliamentary Committee for Iran Freedom were correct.
Now, we are warning yet again against the danger of Iran’s ruling theocracy.
But how does this threat manifests itself?
At home, in the form of flagrant violations of human rights.
In the region, it works against stability by warmongering, terrorism and genocide in Syria, Iraq, Yemen and Lebanon.
Iraq was the first stop for the mullahs’ regime in its ambition to build a World Islamic Caliphate.
If this religious fascism were not in power in Iran, we would not have a shattered Iraq today with all its painful tragedies.

Likewise, in Syria, there would not have been this violent war and genocide and Yemen would not have turned into a killing-field by the regime’s agents.
In the meantime, the mullahs’ theocracy is a source of inspiration for two basic tendencies:
1. Extremism under the banner of Islam and
2. Retaliating against the West.
The outcome of these two tendencies are terrorist attacks in Europe.
In fact, the Iranian regime has an inspiring role, feeding and legitimatizing extremist groups.
It makes no difference if they are Sunni or Shiite.
They are either agents of the Iranian regime or its natural and practical allies.
The fact is that so long as the mullahs are in power, terrorism under the name of Islam will continue to owe its existence to the regime.
Some apologists claim that after the nuclear agreement, the Iranian regime would move towards moderation. Yet, we can see that the situation is otherwise:
Human rights abuses in Iran have worsened after the nuclear deal as has mullah’s meddling and massacre in Syria.

They have even gotten Russia involved.
They have stepped up their efforts to expand their missile system.
Camp Liberty has been the target of a deadly rocket attack and massacre.
In the mullahs’ so-called parliamentary elections, Khamenei disqualified most of the candidates from Rouhani’s faction despite their declared loyalty to the absolute rule of Velayat-e Faqih because he cannot tolerate any challengers within the regime.
This is the meaning of moderation under religious fascism.
Some in the West claim that doing business with Rouhani will lead to the regime’s moderation.
In reality, Rouhani is no different from Khamenei as he has been involved in all the regime’s crimes over the past 37 years.

Even if he were any different, he does not have much authority within the regime.
Every contract signed with Rouhani is a helping hand to the mullahs’ Supreme Leader.
Let us take a look at the commercial deals with Iran:
Today, at least half of Iran’s GDP is controlled by Khamenei and his Revolutionary Guards Corps.
Therefore, most of the contracts signed with Iran are actually signed with companies that are affiliated with Khamenei or the IRGC.

As a result, when a British company makes a deal with Iran, the revenues pour into the coffers of the Revolutionary Guards Corps and the IRGC spends this money on terrorism and war in Syria and ultimately threatens the very security of Europe.
So you can see that these companies are not only ignorant to human rights in Iran but they also sacrifice Europe’s security in the interests of trade with the regime.
Therefore, supporting such false moderates in this regime are in the interest of Khamenei and the IRGC. Dealing with this regime will fund terrorism.

Turning a blind eye on human rights violations in Iran, and failing to protect the Iranian freedom fighters in Camp Liberty, will help the regime.
The correct policy on Iran for the international community is to recognize the Iranian people’s Resistance for regime change because the Iranian nation is the only force capable of neutralizing this danger and bringing democracy, stability and peace to Iran and the Middle East.
The Iranian people, the Iranian Resistance and the international community share common interests in adopting the right policy.

Defending Camp Liberty’s security where thousands of members of the main Iranian opposition reside, is a significant element of the right policy, an effort that you have always pioneered.
I must repeat that your conviction and efforts as well as those of other parliamentary committees in Europe and the States have had serious impact on Camp Liberty’s protection.
However, Liberty remains vulnerable and exposed to dangers; a situation that demands even greater efforts.
The Iranian people will never forget your support and your friendship during these years. Your support will be registered in the annals of Iranian history.