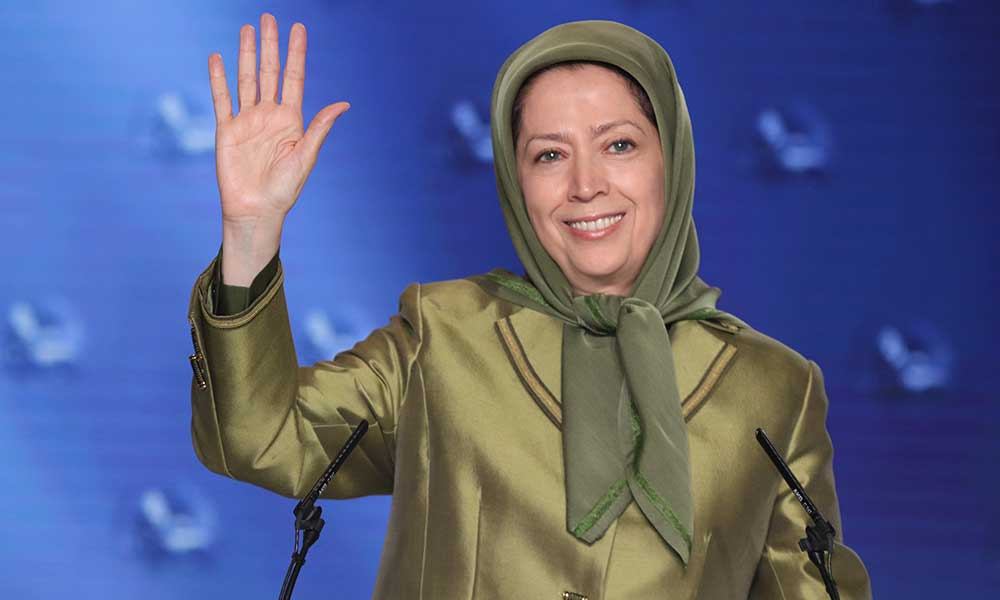 Dear sisters and brothers,
I congratulate all of you on the 52nd anniversary of the People’s Mojahedin Organization of Iran.
Congratulations, because the vitality of this movement delineated its oundaries with religious despotism and reaction, and pioneered the fight against them. It has paid a heavy price for the freedom of Iran and Iranians within a democratic alternative. I am happy to be present today in the last phase of the PMOI’s vote for the election of its new Secretary General. What I witnessed was truly encouraging, inspiring and enthralling, and heralds new heights in the growth and progress of the organization.

First, I would like to congratulate all of you on your election of my dear sister, Zahra Merrikhi, whom you chose unanimously in the final phase of your election process, as the Secretary General of the People’s Mojahedin Organization of Iran.

With this choice, you have presented the PMOI and the Iranian Resistance, in general, with an important gift, which will boost the organization enormously and propel our movement forward politically and organizationally.

I could see with my own eyes that the Mojahedin (PMOI members) have become prolific. I saw a long line of those who could serve as Secretary General. And I saw how, with utmost knowledge and responsibility toward achieving your goal, you reached such unanimity.

I witnessed the glorious moments when your sisters –whom you had nominated as candidates—spoke with one heart, in unity. I felt great pride. I heard you speak and I greatly admired your sincerity and awareness, and the consensus you have in the principles and values by which you live. I could sense the truthfulness in each and every one of you, in your votes, and in your eyes when you spoke of the advancements of the PMOI. And I was truly pleased and honored.

I enjoyed and took pride in all the moments of this meeting, including your choice of candidates from the new generation, namely Nargess Azdanlou, Rabi’eh Mofidi and Nasrin Massih; the remarks made by former secretaries general; the extraordinary performance of Zohreh Akhyani in moderating the meeting; and the moments when you voted for Zahra Merrikhi, the climax of this event.

I ask God Almighty to grant you ever more strength, capability and success in advancing this grave responsibility.

At this point, I would also like to express my appreciation for the service of, Zohreh Akhyani. She has carried out her duties as PMOI Secretary General in the best possible manner since 2011. We do not forget the hardships the PMOI went through during this period. The attacks by forces of Maliki and Khamenei, the relocation from Ashraf, and the major relocation out of Iraq; all the pressures and the siege; each day brought tension and crisis. In such circumstances, your leaders, these pioneering women of Iran, led the movement in Ashraf and Liberty with aptitude and strength.

I would also like to express my appreciation for the service of, Mojgan Parsaii, who had a special role in advancing the PMOI’s battle and was a role model of courage and responsibility.

In reality, the struggle in Ashraf and Liberty was a great experience that will forever shine through the history of Iran, for one because each of my sisters emerged proud and victorious from this great test.

Now, in the wake of all these ups and downs, the election of a new Secretary General heralds a new era which, without doubt, holds promise of the downfall of the clerical regime.

Over these years, the clerical regime conspired and attacked on every front, in Ashraf and in Liberty, and in complicity with 12 other governments, to destroy and disintegrate the PMOI; to no avail. All their efforts failed, but your perseverance prevailed. This is the gift of your resistance and resolve.

As far as the political situation is concerned, I believe that the election of a new Secretary General is the PMOI’s response to the ripe social conditions in Iran. We can see that the people are fed up. Women and youths in particular are yearning for change. They do not wish to continue living under theocratic rule. It has reached a point at which the ruling regime is absolutely frantic.

This regime can rely only on sheer suppression to hold its grip on power. It is out of touch with its own people; its forces are constantly eroding, and its Revolutionary Guards and Bassij forces are increasingly plagued by loss of morale. Such a regime is very fragile, and cannot hold out against a resistance and uprising by the people and the Army of Freedom.

The election of a new Secretary General is the appropriate response to such circumstances.
In the 14 years of PMOI perseverance, the regime dreamed of shattering the PMOI’s organization. In the past year too, it has gone to great lengths to do so. On the opposite side, however, you launched a political and ideological bombshell when you elected a secretary general in a solid, united organization. The mullahs’ desperate Supreme Leader will be the first to understand the message of this election.

This is a brilliant choice made at the height of democracy, coherence, and growth of the PMOI in its fight to overthrow the religious fascism ruling Iran by creating 1,000 bastions of rebellion. Within the organization, it upholds the legacy of the PMOI’s founder, Mohammad Hanifnejad, and the ideal of Massoud Rajavi. In the social and political realms, it heralds the breaking of the spell of repression.

It is truly fortunate that the People’s Mojahedin are in such a noble position on the 52nd anniversary of their organization. For this reason, we must underscore our congratulations on the founding of the PMOI.

By founding the PMOI, three great men of Iran’s contemporary history –Mohammad Hanifnejad, Saeed Mohsen, and Ali Asghar Badizadegan– did away with everything that was regressive, out-of-date and oppressive, and replaced them with the progressive ideas and liberating practices they had either created or revived. In this way, the PMOI was founded in a spirit of rebellion against whatever was out of date. They broke through the deadlocks and created a new world.

They laid the foundations of the brilliant tradition of adhering to one’s ideal and remaining loyal to one’s word at the price of their lives. We hail the great founders of the People’s Mojahedin Organization of Iran, who initiated a path to which Iran’s liberation movement will forever remain indebted.

And we send our best regards and congratulations to Massoud Rajavi, who has led this organization through tortuous and dangerous passages. He drafted the theoretical and political foundations of this struggle. He is the founder of an all-out battle against reactionary ideologies, despotism and exploitation. And he has made the values and ideals of resistance more effective and far-reaching at every stage.

A glance at these 52 years reveals the essence of the PMOI’s history as a bastion of endurance, inspiring the progressive values and ideals of struggle for the freedom of Iran. And this is a struggle that will continue relentlessly until the overthrow of religious fascism in Iran and until the country is freed of all forms of discrimination and exploitation.

The People’s Mojahedin of Iran are fortunate to have stood firm, resolute and decisive in the struggle to advance this goal. Mountains moved, but the Mojahedin did not budge from their pledge to overthrow the mullahs’ velayat-e faqih regime.

Iran’s women and youths are fortunate to enjoy such an impressive treasure, on which they can rely in responding to their historical duty to rebel against the tyrants and overthrow them.

Hail to all my honorable and freedom-loving compatriots, who have shunned all forms of complicity and cooperation with the clerical regime as a redline in their struggle for freedom.

Once again, I congratulate you all on the anniversary of the foundation of the People’s Mojahedin Organization of Iran and the election of Zahra Merrikhi as your Secretary General. I am confident that with this choice, and with your determination and faith, you will open the road to victory and Iran’s freedom. 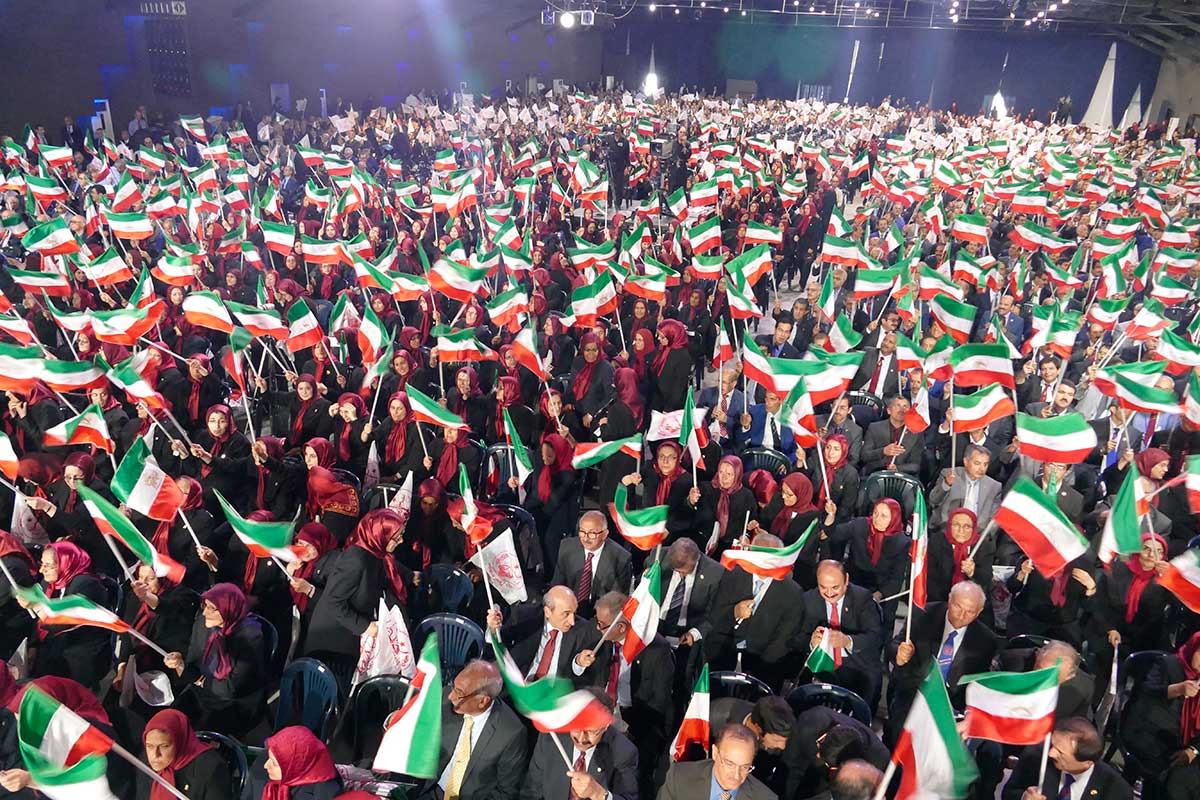