Solidarity of France’s Representatives against Extremism 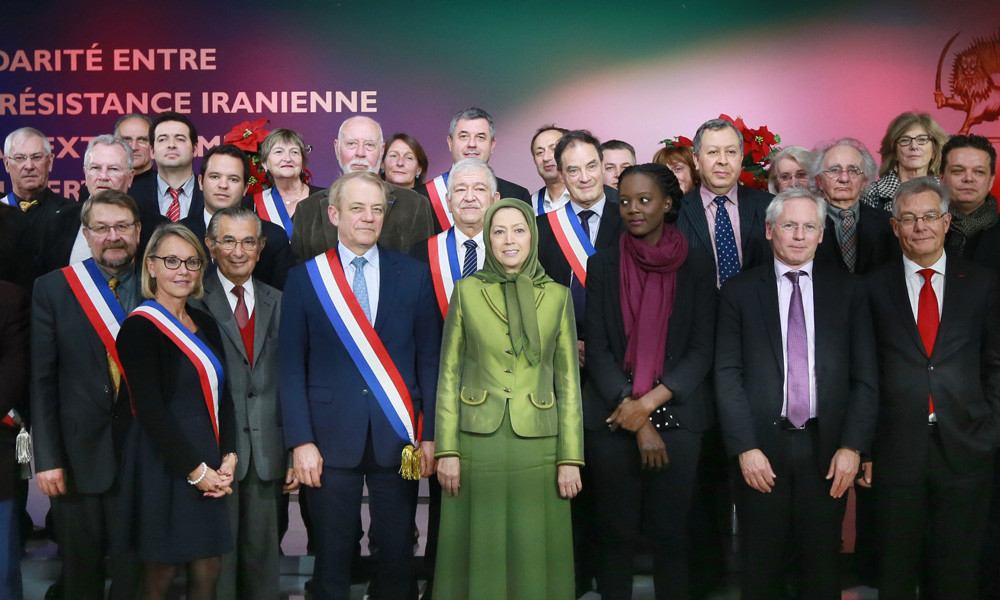 heir lives as a result of extremist crimes in 2015, including the political prisoners executed in Iran, Camp Liberty martyrs, and victims of terrorist attacks in January and November in France.
Let us pay tribute to them by observing one minute of silence.

I am very pleased to see you, ladies and gentlemen, the mayors and elected representatives of France, here at the headquarters of the Iranian Resistance. Mayors and elected officials of France are representatives of the most significant institutions of democracy in this country. They have always stood beside the Iranian Resistance and this has been really admirable.
You have protested against violations of human rights and suppression of women in Iran. You have supported Ashraf and Camp Liberty when they were attacked by the Iranian regime’s operatives in Iraq. You were at the forefront of the campaign of justice for the Iranian Resistance both in the case of June 17th attack which was terminated last year and the cases of terrorist designations which were reversed in all countries.

The declarations signed by 14,000 mayors and elected representatives of France in support of the Iranian Resistance, are very precious documents. They express the great values of France.
At this point, let us remember the friends who are not among us any more: Adrian Zeller, Mourice Bouscavert and also Abbe Pierre who we commemorate his first anniversary today. They played a valuable role in our struggle.

Also your political stances over the years have been admirable. Time and again, you warned against a number of threats: the mullahs’ nuclear weapons; Islamic fundamentalism; violations of human rights in Iran and the mullahs’ domination of the region.
The tragedies in January and November but underlined the importance of the French mayors’ repeated warnings against the threat of Islamic extremism. On the other hand, the cancerous expansion of Daesh showed how destructive the consequences of the mullahs’ hegemonic ambitions in the region have been. When Iran’s ruling mullahs helped their puppet governments in Iraq and Syria to suppress the people of these countries, the opportunity emerged for Daesh to grow and spread.