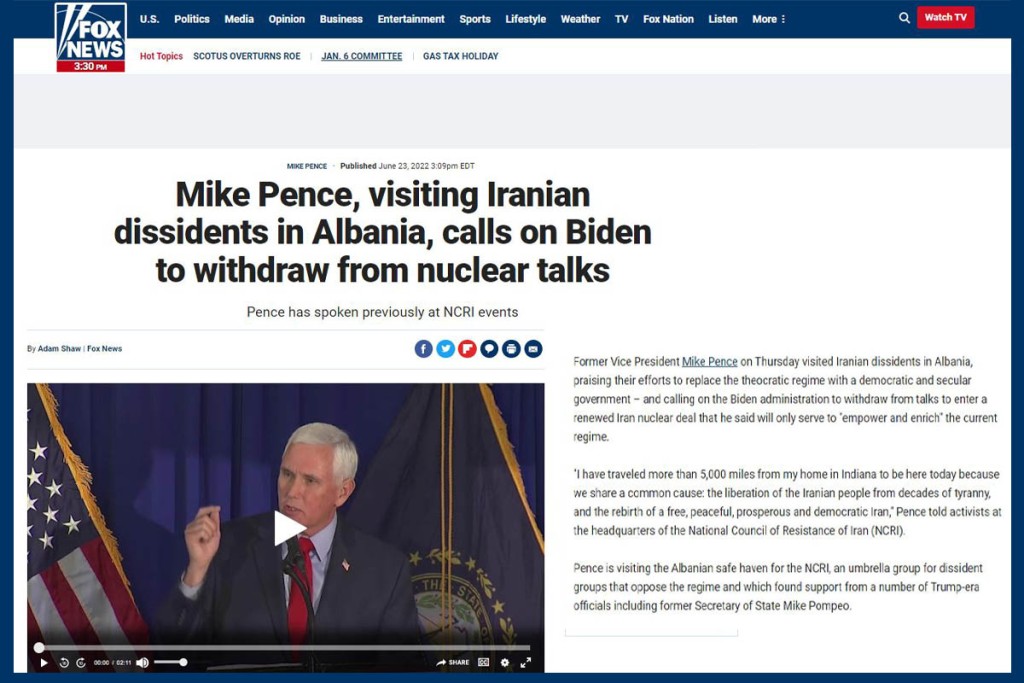 Former Vice President Mike Pence on Thursday visited Iranian dissidents in Albania, praising their efforts to replace the theocratic regime with a democratic and secular government – and calling on the Biden administration to withdraw from talks to enter a renewed Iran nuclear deal that he said will only serve to “empower and enrich” the current regime.

“I have traveled more than 5,000 miles from my home in Indiana to be here today because we share a common cause: the liberation of the Iranian people from decades of tyranny, and the rebirth of a free, peaceful, prosperous and democratic Iran,” Pence told activists at the headquarters of the National Council of Resistance of Iran (NCRI).

Pence is visiting the Albanian safe haven for the NCRI, an umbrella group for dissident groups that oppose the regime and which found support from a number of Trump-era officials including former Secretary of State Mike Pompeo.

Pence met with NCRI President-elect Maryam Rajavi, and with those who suffered human rights abuses in the country, before he delivered a speech to activists praising their struggle and telling them that the American people stand with their cause, while noting the withdrawal from the Iran nuclear deal by the Trump administration in 2018.

“Under the Trump-Pence administration, I am proud that in our time, America did not turn a deaf ear to the pleas of the Iranian people, and we did not remain silent in the face of the Iranian regime’s countless atrocities,” he said. “We proudly stood with the freedom-loving people of Iran. We canceled the Iran nuclear deal, which had flooded the regime’s coffers with tens of billions of dollars, and pallets of cash — money that it used to repress its own people and support deadly attacks across the wider world.”

The NCRI, which has offices in Washington D.C., has pushed for a tougher stance by the West against Iran — and has opposed efforts to re-enter the Iran deal, warning that the regime cannot be trusted to comply with terms. It is the political wing of the Mujahedeen-e-Khalq, the main Iranian opposition movement which recently launched a number of cyberattacks in Iran that took down security cameras and government websites.

The Trump administration pulled out of the 2015 accord, which placed limits on Iran’s nuclear activities in exchange for sanctions relief, in 2018 and began re-imposing waves of sanctions as part of a “maximum pressure” strategy designed to turn up the heat on the regime and curb its aggression via proxies in the region. The administration also launched a strike that took out Islamic Revolutionary Guards Corp Quds leader Qassem Soleimani.

Talks designed to bring both the U.S. and Iran back into the deal have stalled amid demands from both Iran’s new hardline government and from Russia, who want to make sure that the sanctions being imposed on Moscow for its invasion of Ukraine will not affect its trading relationship with Iran.

Pence was critical of the efforts to re-engage the deal, a deal he called a “dangerous mistake,” warning that it would only serve to aid the regime and do little to curb its path to a nuke.

“A renewed nuclear deal won’t lead to peace and stability. It will lead to more terrorism, death and destruction. A renewed deal with Iran won’t block Iran’s path to a nuclear bomb. It will pave a path in gold,” he said. “And a renewed Iran nuclear deal won’t benefit the people of Iran in any way It will merely empower and enrich a corrupt regime that has tormented and tortured the Iranian people for generations.”

“Pence then turned his attention to the administration, calling for it to withdraw from talks and to voice support for the NCRI‘s opposition efforts.

“Today, we call on the Biden administration to immediately withdraw from all nuclear negotiations with Tehran, voice support for the organized opposition in Iran, and make it clear that America and our allies will never permit the regime in Tehran to obtain a nuclear weapon,” he said.

Pence is one of a number of Republicans who have opposed the Biden administration’s moves to put the U.S. back into the Iran deal. In March, a group of 49 Republican senators said they would not approve the deal and vowed to reverse any deal that weakened sanctions and lowered nuclear restrictions.

“The nuclear limitations in this new deal appear to be significantly less restrictive than the 2015 nuclear deal, which was itself too weak, and will sharply undermine U.S. leverage to secure an actually ‘longer and stronger’ deal,” they said. “What is more, the deal appears likely to deepen Iran’s financial and security relationship with Moscow and Beijing, including through arms sales.”