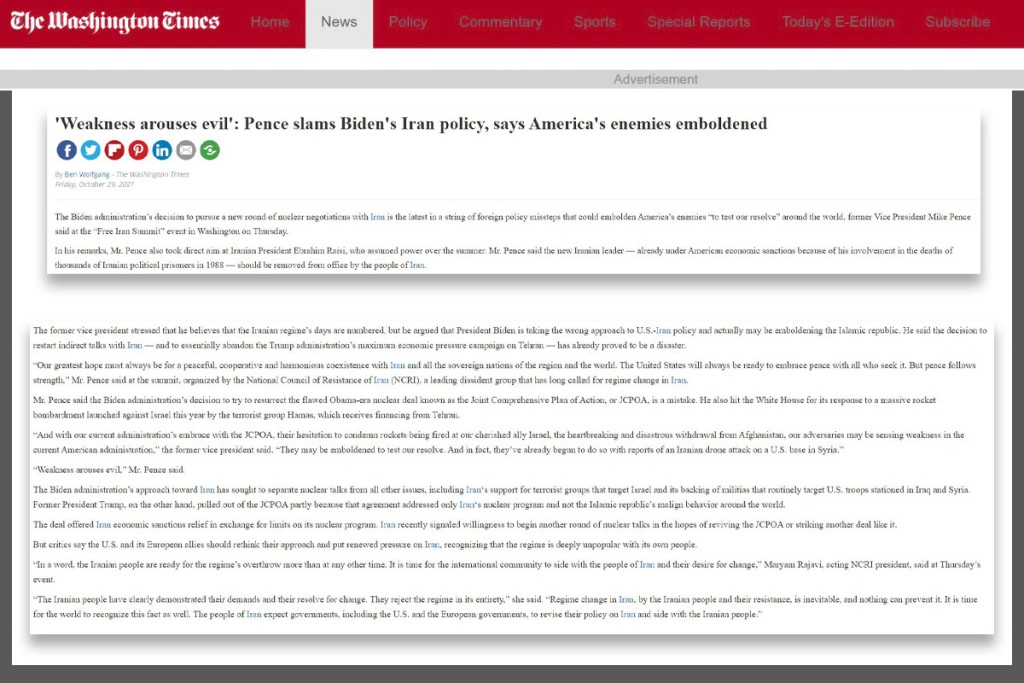 The Biden administration’s decision to pursue a new round of nuclear negotiations with Iran is the latest in a string of foreign policy missteps that could embolden America’s enemies “to test our resolve” around the world, former Vice President Mike Pence said at the “Free Iran Summit” event in Washington on Thursday.
In his remarks, Mr. Pence also took direct aim at Iranian President Ebrahim Raisi, who assumed power over the summer. Mr. Pence said the new Iranian leader — already under American economic sanctions because of his involvement in the deaths of thousands of Iranian political prisoners in 1988 — should be removed from office by the people of Iran.
The former vice president stressed that he believes that the Iranian regime’s days are numbered, but he argued that President Biden is taking the wrong approach to U.S.-Iran policy and actually may be emboldening the Islamic republic.
He said the decision to restart indirect talks with Iran — and to essentially abandon the Trump administration’s maximum economic pressure campaign on Tehran — has already proved to be a disaster.
“Our greatest hope must always be for a peaceful, cooperative and harmonious coexistence with Iran and all the sovereign nations of the region and the world. The United States will always be ready to embrace peace with all who seek it. But peace follows strength,” Mr. Pence said at the summit, organized by the NATIONAL council OF RESISTANCE of Iran (NCRI), a leading dissident group that has long called for regime change in Iran.
Mr. Pence said the Biden administration’s decision to try to resurrect the flawed Obama-era nuclear deal known as the Joint Comprehensive Plan of Action, or JCPOA, is a mistake. …
“Weakness arouses evil,” Mr. Pence said.
…The deal offered Iran economic sanctions relief in exchange for limits on its nuclear program. Iran recently signaled willingness to begin another round of nuclear talks in the hopes of reviving the JCPOA or striking another deal like it.
But critics say the U.S. and its European allies should rethink their approach and put renewed pressure on Iran, recognizing that the regime is deeply unpopular with its own people.
“In a word, the Iranian people are ready for the regime’s overthrow more than at any other time. It is time for the international community to side with the people of Iran and their desire for change,” Maryam RAJAVI, acting NCRI president, said at Thursday’s event.
“The Iranian people have clearly demonstrated their demands and their resolve for change. They reject the regime in its entirety,” she said.
“Regime change in Iran, by the Iranian people and their resistance, is inevitable, and nothing can prevent it. It is time for the world to recognize this fact as well. The people of Iran expect governments, including the U.S. and the European governments, to revise their policy on Iran and side with the Iranian people.”