Gathering in Villepinte, near Paris 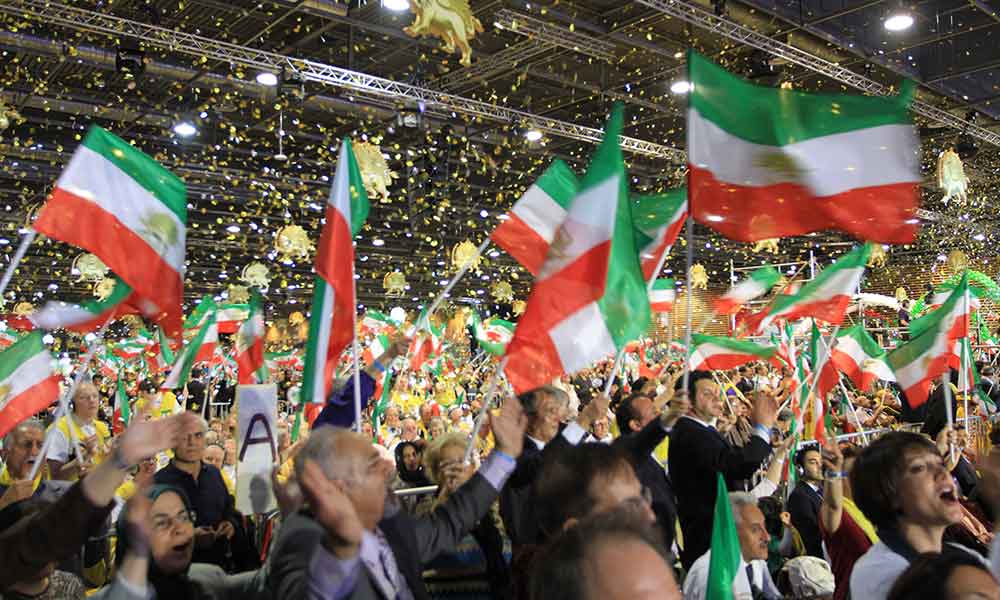 Gathering in Villepinte, near Paris, declared:
Regime elections a sham, the new president illegitimate, the only option is to overthrow the regime and support Maryam Rajavi’s movement

Maryam Rajavi:
• The regime’s new president is a veteran functionary of the regime’s machinery of war and repression.
• Warning to the U.S. and the UN about the security of the Iranian opposition in Liberty and imperative of returning the residents to Ashraf.

The largest gathering of Iranians in exile was held in the afternoon of June 22 in Villepinte, near Paris, with the participation of over 600 political dignitaries, lawmakers, and jurists representing a wide spectrum of political tendencies from more than 50 countries around the world.

Speakers at the event noted that the Iranian regime’s sham election was neither free nor fair, and emphasized: “The election was held in an atmosphere of absolute repression characterized by the arrests of dissidents, interruption of free access to the Internet, the banning of free press, and a dense presence of suppressive forces. The Iranian regime’s new president is someone who not only cannot be branded as a moderate but has in fact held senior positions in close collaboration with Khamenei, advancing the regime’s policies of waging wars and suppressing the Iranian people to preserve the regime’s security.”

The speakers stressed that the international community and the Iranian people yearn for democratic change in Iran. The only way to rid the world of the evil of this regime, which has threatened peace and security around the world, especially the Middle East, is regime change at the hands of the Iranian people and their organized resistance movement. They thanked Maryam Rajavi, the President-elect of the Iranian Resistance, for her unrelenting efforts in leading the resistance movement, expressed support for her ten-point plan for the establishment of democracy and freedom in Iran, and urged their respective governments to recognize the resistance movement led by Mrs. Rajavi.

The gathering condemned in the strongest terms the third missile attack against defenseless refugees residing in Liberty Prison. This deadly attack using Forty 107 mm rockets took the lives of two PMOI members and wounded over 70 other residents. which The regime’s Supreme Leader Ali Khamenei ordered the assault, which was carried out by the terrorist Qods Force agents and with the support of Iraqi Prime Minister Nouri al-Maliki. The speakers called on the U.S. government, the United Nations, the European Union, and the European Parliament to ensure the rights of the defenseless residents of Ashraf and Liberty, and in particular guarantee their safety and security. They emphasized that the only way to prevent a repeat of this tragedy and to provide relative safety for the residents is to temporarily return them to Ashraf where they could gradually be resettled in third countries.

While stressing that the systematic and steady stream of lies by the UN Secretary General’s Special Representative in Iraq, Martin Kobler, against the residents clearly set the stage for the massacre of the defenseless refugees, the gathering voiced support for the residents of Ashraf and families of the victims for bringing Kobler to justice for his complicity in crimes against humanity.

During the huge rally, which lasted for seven hours, dozens of distinguished personalities gave speeches on behalf of their delegations. Also announced at the Villepinte gathering were declarations of support from majorities of parliaments and statements by parliamentarian groups from 40 counties in five continents around the world, in addition to the expression of support for the Iranian Resistance and camps Ashraf and Liberty residents by 12,500 French mayors.

Maryam Rajavi was the keynote speaker. She described the sham election as a clear testament to the regime’s final phase before being overthrown, saying: Even though Khamenei eliminated Ali Akbar Hashemi Rafsanjani, who was instrumental in bringing him to power, when it ultimately came to a decision between acquiescing to Hassan Rowhani’s presidency on the one hand and facing popular uprisings on the other, he chose the former. Several hours before announcing the election result, Khamenei tried to conceal his defeat by attacking Liberty and killing the combatants of freedom in a bid to warn the Iranian people who were poised to stage an uprising. At the same time, the clerical regime demonstrated what it perceives to be the main threat to the entirety of the regime by resorting to the missile attack and killings.

The Iranian regime’s new president is a veteran functionary of the regime’s machinery of war and repression.

Maryam Rajavi added: Still, we invite the mullahs’ new president to acquiesce to the immediate demands of the Iranian people. We say: in the absence of freedom of expression and human rights, without releasing political prisoners and recognizing freedom of political parties, without ending the aggressions of the regime in Syria and Iraq and without completely stopping the nuclear weapons program, nothing will change in Iran. Therefore, this is your test; please go ahead and do it. But, the reality is that the regime’s Supreme Leader is fully cognizant that any serious change or shift in these policies would trigger the overthrow of the regime in its entirety.

Maryam Rajavi pointed to the three deadly attacks against the defenseless refugees residing in “Liberty,” and said: “The regime’s first missile attack, which resulted in the martyrdom of eight PMOI members, clearly displayed to the entire world that Liberty Prison is completely unsafe and that forcibly depriving the former residents of Ashraf of their homes, which occurred through the deception of the UN Secretary General’s Special Representative in Iraq, has led to their relocation to a killing field. After the first attack, the natural expectation was for the UN and the U.S., which had expressed commitments with respect to the PMOI’s security and protection in Liberty, to immediately find a solution; especially since the terrorist group created by the Iranian regime in Iraq had vowed more attacks and the Iraqi government had simultaneously and expressly declared that it will not ensure the safety of Liberty. The U.S. embassy in Baghdad had also predicted the possibility of more attacks. Therefore, everyone knew that another attack is imminent, and yet no effective measures were adopted.”

Commenting on the clerical regime’s belligerent meddling in other countries of the region, Mrs. Rajavi added: The clerical regime has waged war on the people of Syria to forestall its own overthrow. This dirty war is not to save Assad, but to save Khamenei in Tehran. For, this regime has to spread fundamentalism and terrorism from Afghanistan to Iraq to Bahrain to Yemen in order to preserve itself.

Maryam Rajavi added: The mullahs’ 35-year rule has resulted in killings, devastation, impoverishment, drug addiction, high prices and unemployment. . Overthrowing this regime will not happen by itself. It requires a resistance movement equipped with a cohesive and united organization, with members ready to sacrifice, with popular support, with financial independence, with the widespread presence of women in all arenas and with a democratic alternative having clear objectives and plans.

Maryam Rajavi reiterated her ten-point plan for the establishment of democracy and freedom in Iran (attached), and said: Our position is not that the mullahs should leave so we replace them. Rather, we say that the vote, choice and views of the Iranian people must reign supreme.

Secretariat of the National Council of Resistance of Iran
June 22, 2013

Ambassador John Bolton, Former Undersecretary of State for Arms Control and International Security and the U.S. Permanent Representative to the United Nations; Speaker John Dennis Hastert, Former Speaker of the US House of Representatives; Judge Michael Mukasey, The 81st Attorney General of the United States; Ambassador Mitchell Reiss, Former Director of Policy Planning at the U.S. Department of State; Senator Robert Torricelli, Former Member of the US Senate; Ambassador Robert Joseph, Former US Undersecretary of State for Arms Control and International Security; Patrick Kennedy, Former Member of US House of Representatives; Undersecretary Phillip J Crowley, Assistant Secretary of State from 2009 to 2011, Senior director of public affairs for the United States National Security Council and Special Assistant to the President for national security affairs in 1997; A U.S. military delegation: Col. Wesley Martin, The first Colonel Commandant of Ashraf, Col. Leo McCloskey, JIATF Commander at Ashraf; Col. Thomas Cantwell, served in the US military under Multinational Force-Iraq; Col. Barry Johnson, served in the US military under Multinational Force-Iraq; General George Casey, Chief of Staff of the United States Army from 2007 to 2011 and served as the Commanding General, Multi-National Force – Iraq from 2004 to 2007; General Chuck Wald, Former Deputy Commander of U.S. European Command Headquarters; General James Conway, the 34th Commandant of the Marine Corps; Madam Frances Townsend, Homeland Security Advisor to United States President George W. Bush; Ambassador Marc Ginsberg, US ambassador to Morocco from 1994–1998 and former Deputy Senior Adviser to the President of the United States for Middle East Policy; Porter Goss, Former Director of the US Central Intelligence Agency;

European Parliament: Vice-president Alejo Vidal-Quadras, Vice-president of the European Parliament; Struan Stevenson, President of the European Parliament Delegation with Iraq; Oldrich Vlasak, Vice President of the European Parliament.
From France: Michele Alliot-Marie, Former French Minister of Defense, Minister of Justice, and Minister of Home Affairs; Jean-Pierre Béquet, Mayor of Auvers-sur-Oise, Introducing the delegation of French Mayors, He is also presenting a statement of support from French mayors; Dominique Lefebvre, Member of French National Assembly, Introducing the delegation of French deputies, He is also presenting a statement of support from the majority members of the French National Assembly; Jean- François Legaret, Mayor of the 1th district of Paris; Nelly Roland Iriberry, Mayor of Villepinte; Aude de Thuin, Founder and President of the Women‘s Forum for the Economy and Society;
From the United Kingdom: David Amess, Member of British Parliament, representing a British delegation of parliamentarians, jurists, political activists and human rights activists.

10 Point plan for futur of Iran

1. In our view, the ballot box is the only criterion for legitimacy. Accordingly, we seek a republic based on universal suffrage.

2. We want a pluralist system, freedom of parties and assembly. We respect all individual freedoms. We underscore complete freedom of expression and of the media and unconditional access by all to the internet.

3. We support and are committed to the abolition of death penalty.

4. We are committed to the separation of Religion and State. Any form of discrimination against the followers of any religion and denomination will be prohibited.

5. We believe in complete gender equality in political, social and economic arenas. We are also committed to equal participation of women in political leadership. Any form of discrimination against women will be abolished. They will enjoy the right to freely choose their clothing. They are free in marriage, divorce, education and employment.

6. We believe in the rule of law and justice. We want to set up a modern judicial system based on the principles of presumption of innocence, the right to defense, effective judicial protection and the right to be tried in a public court. We also seek the total independence of judges. The mullahs’ Sharia law will be abolished

7. We are committed to the Universal Declaration of Humans Rights, and international covenants and conventions, including the International Covenant on Civil and Political Rights, the Convention against Torture, and the Convention on the Elimination of all Forms of Discrimination against Women.
We are committed to the equality of all nationalities. We underscore the plan for the autonomy of Iranian Kurdistan, adopted by the National Council of Resistance of Iran. The language and culture of our compatriots from whatever nationality, are among our nation’s human resources and must spread and be promulgated in tomorrow’s Iran.

8. We recognize private property, private investment and the market economy. All Iranian people must enjoy equal opportunity in employment and in business ventures. We will protect and revitalize the environment.

9. Our foreign policy will be based on peaceful coexistence, international and regional peace and cooperation, as well as respect for the United Nations Charter.

10. We want a non-nuclear Iran, free of weapons of mass destruction.