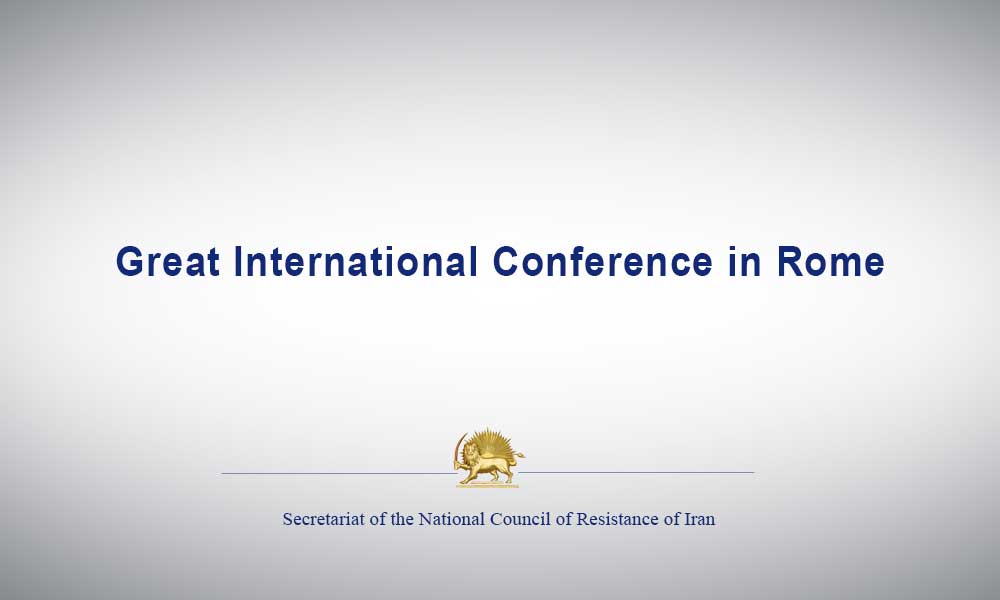 and act against arbitrary executions by clerical regime
In the afternoon of December 19, in an international conference in Rome where prominent European and American political figures partook, participants expressed their support for a call by Maryam Rajavi, for an international campaign. This campaign aims at securing freedom of seven Iranian dissidents taken hostage in Camp Ashraf since September 1. Guaranteeing security of 3000 Iranian dissidents in Camp Liberty in Iraq, as well as support for demands by protesting prisoners throughout Iran, in particular cessation of arbitrary executions intensified during office of new mullahs’ President, are amongst other objectives of this international campaign.

Speakers condemned violation of human rights in Iran, especially the arbitrary executions, and called on the Italian government, the European Union, and the Security Council to precondition economic and political relations with this regime to the abolition of the death sentence and improvement of human rights in Iran. In addition to Maryam Rajavi; Mr. Bernard Kouchner, former French Foreign Minister; Ms. Michèle Alliot-Marie, former French Foreign, Defense and Interior Minister; Lucio Malan, member of Italian Senate Presidential Board ; Gianni Alemanno, former Mayor of Rome; Carlo Ciccioli, former representative and joint Chair of Italian Committee of parliamentarians and citizens for a Free Iran (CPCIL); Senator Ingrid Betancourt, Columbian Presidential candidate; Senator Robert Torricelli from U.S.; Dr. Juan Garces, prominent international jurist and political advisor to Salvador Allende; Taher Boumedra, UN official responsible for Ashraf dossier; Ms. Soyem from Albania; General David Phillips, former commander for protection of Ashraf; and Colonel Wesley Martin, former Senior Anti-terrorism Force Protection Officer for all Coalition Forces in Iraq and Commander of Forward Operation Base in Ashraf and a number of Italian governors and mayors offered speeches to this conference.
Participants in the conference expressed their content with a decree by the Spanish Court against organizers and perpetrators of the September 1 massacre in Ashraf and offered their gratitude to Rajavi for her endeavors to end the pain and suffering of hundreds of members and supporters of PMOI and the Iranian Resistance who had staged a hunger strike for 108 days in an international campaign to win the release of the hostages.
Speakers emphasized that the massacre of PMOI in Ashraf and persistence of crimes against members of the Iranian Resistance in Camp Liberty and continuation of enchainment of seven Ashraf hostages is the product of inaction and silence on part of United States and United Nations despite their commitments to these people who are all “protected persons” under the Fourth Geneva Convention in addition to the fact that in view of the UN High Commissioner for Refugees, they are recognized as refugees or asylum-seekers and “people of concern”.
Speakers called on the United Nations, the U.S. government, and the European Union to act in adherence to their legal obligations and repeated commitments vis-à-vis the safety and security of 3000 Iranian refugees in Camp Liberty.
Referring to the Geneva agreement Rajavi said: “While mullahs’ nuclear project has born no fruit for the Iranian people but plundering their wealth and is utterly despised by them and while the clerical regime is engulfed in crises, had the P5+1 insisted on a firm policy to implement in full the Security Council resolutions, it could have surely forced the mullahs in Geneva negotiations to bring their nuclear program to a complete halt. Nonetheless, advocates of appeasement with the mullahs and those who shake mullahs’ bloody hands, are never capable of taking the bomb out of mullahs’ hands. She added that this is while the mullahs are more vulnerable than ever and if western countries refrain from assisting them, people of Iran would deal with this regime as they should.”
Rajavi described termination of mullahs’ nuclear program as a target at hand and noted that the ruling dictatorship is in its final phase. Through compelling mullahs to accept the Additional Protocol, oxidize all their stockpile of uranium, and close down all their nuclear sites, together with the West refraining from any easing of sanctions until this regime accepts Security Council resolutions, mullahs can be forced to a complete retreat.
Rajavi stressed: “The same policy that has led to the inaction of U.S., EU and UN in face of mullahs’ weaponization, has also ignored the barbaric violation of human rights in Iran, and stampeded on the legal commitments and responsibilities toward Ashraf and Camp Liberty. The ghastly policy that through negating realities intends to wash the hands of murderers, i.e. Maliki and Khamenei, will surely ignite the engine of a still greater atrocity.” She warned that the U.S. government and United Nations bear complete responsibility for anything that happens to PMOI members in Camp Liberty. They should guarantee the safety and security of PMOI members in Camp Liberty as demanded by their obligations.

Secretariat of the National Council of Resistance of Iran
December 19, 2013