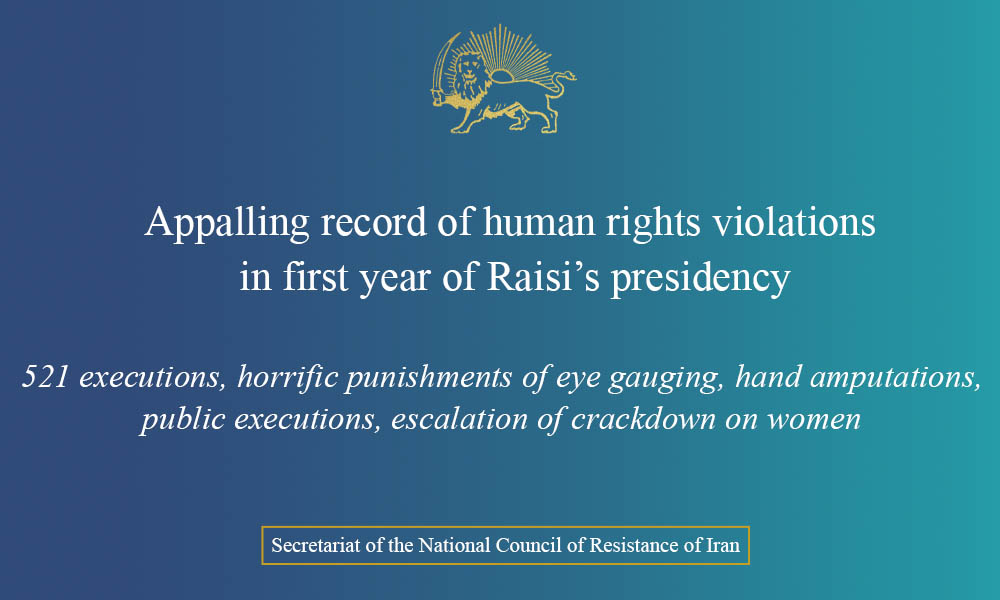 Ebrahim Raisi, known as the henchman of 1988, completed his first year of presidency with a dark record of egregious and systematic violation of human rights. Under his tenure, the regime has unprecedentedly stepped up executions and suppression, to save the ruling theocracy from the explosion of people’s anger and to delay its inevitable overthrow,

A year into his presidency, which began on August 3, at least 521 prisoners were executed, including 21 women And six minors at the time of committing the alleged offense. In the final 10 days of July, 33 prisoners were hanged and public executions resumed. At least seven prisoners were killed under torture in the past year. Most of the victims were accused of drug trafficking, whereas the IRGC and Hezbollah control the massive drug trade and its transit outside Iran.

In the same period, one prisoner died due to hunger strike and several prisoners passed away because of the delay in their treatment. Several other prisoners, including a Sunni cleric, died under suspicious circumstances. A number of prisoners were executed after enduring years of imprisonment, in some cases up to 20 years.

Yesterday, August 2, state-run news agencies announced that the regime’s Supreme Court had confirmed the horrific verdict of gouging out the eyes of a woman and two men. The victims were sent to Tehran for the verdict to be carried out. In June and July, regime henchmen amputated the fingers of two prisoners charged with petty theft.

Executions continue unabatedly Based on the secret documents obtained from within the regime’s Judiciary, the NCRI Security and Counterterrorism Committee announced in its statement on May 16, 2022, that 5,370 prisoners were on the death row.

Regime Supreme Leader Ali Khamenei described Raisi’s appointment on August 3, 2021, as “a completely meaningful step,” adding, “New people with new initiatives are entering the field.” On the occasion of Iranian New Year (March 2022), he also referred to Raisi’s appointment as one of the “sweet developments” of the past Iranian year, which “revived hopes.”

Raisi’s one-year record reaffirms that Khamenei considers him as the final solution in dealing with a crisis-riddled and explosive society. Khamenei’s characterization of “the meaningful step,” “new initiatives” and “sweets developments of last year” means even more executions and crackdown to preserve the faltering regime.

Commenting on the one-year record of the clerical regime, Mrs. Maryam Rajavi, the President-elect of the National Council of Resistance of Iran (NCRI), said that the continuing and intensifying bloodshed and crimes against humanity will not and cannot save the ruling theocracy from being overthrown. Quite the opposite, it will make the Iranian people and the Resistance more determined in their struggle for freedom.

Reiterating that engaging with a regime that egregiously violates all recognized international principles and standards of human rights is neither legitimate nor justified whatsoever, she urged the United Nations and all human rights advocates, as well as the European Union and its member states to condemn the crimes of this medieval regime and take immediate action to save the lives of thousands of death row prisoners. The dossier on human rights violations in Iran should be referred to the United Nations Security Council, and Khamenei, Raisi, and other regime leaders should be brought to justice for four decades of crimes against humanity, Mrs. Rajavi added.

Secretariat of the National Council of Resistance of Iran (NCRI)
August 3, 2022