I have a dream: a free and democratic Iran 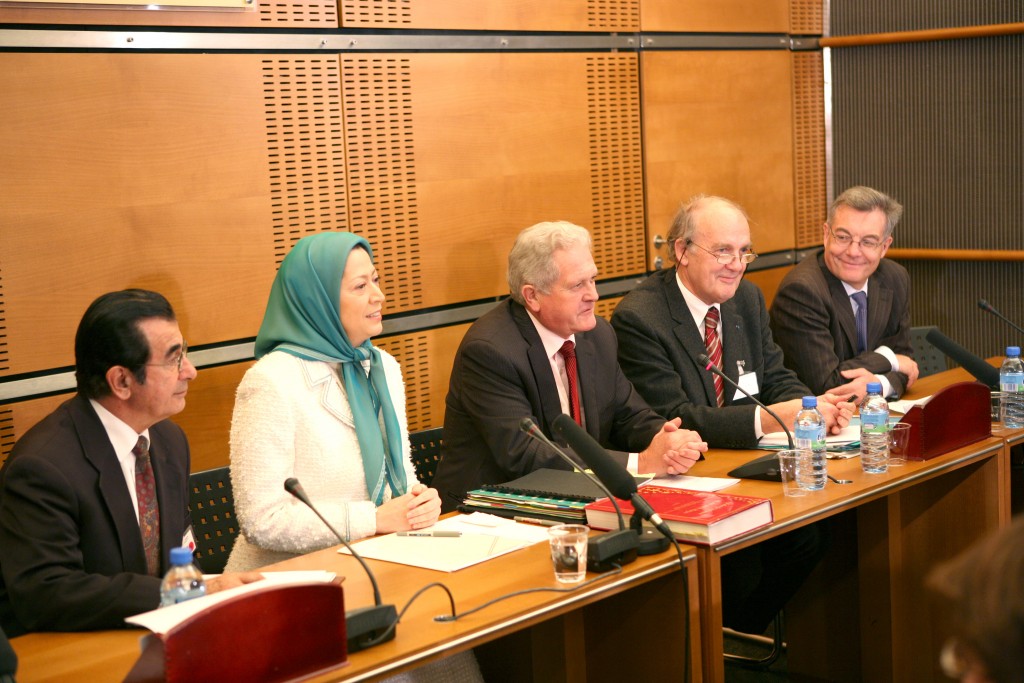 In a meeting at the Norwegian Parliament on Wednesday, November 8, Maryam Rajavi, President elect of the Iranian Resistance, gave a speech about the situation in Iran:

It is indeed a pleasure to be among you today in the Stortinget. I thank you for the opportunity.

This Parliament is the house of the nation and the expression of democracy and freedom. Its preservation is indebted to the Norwegian resistance against Hitler

In a meeting at the Norwegian Parliament on Wednesday, November 8, Maryam Rajavi, President elect of the Iranian Resistance, gave a speech about the situation in Iran:

It is indeed a pleasure to be among you today in the Stortinget. I thank you for the opportunity.

This Parliament is the house of the nation and the expression of democracy and freedom. Its preservation is indebted to the Norwegian resistance against Hitler’s Nazism. I salute all resistance fighters in Norway for standing up to fascism.

I salute the heroes of Telemark who in February 1943 blew up the Rjukan heavy water plant, preventing Hitler from obtaining the nuclear bomb. Their patriotism went beyond Norway’s borders and rose to safeguard humanity.

They saved our world. All of us must be grateful to them and today I am delighted to echo my compatriots’ cry for freedom in this house of democracy.

I would also like to express my gratitude to the Parliament of Norway for standing up to the blackmail and pressures of the clerical regime to prevent this trip. The mullahs view this Resistance movement as an existential threat. Their pressures reflect their fragile state and the impact the Resistance has in developments in Iran. This hysteric reaction also demonstrates the extent of repression in Iran, in that the mullahs cannot even tolerate their opponents meeting European officials.

Norway is identified with defending human rights and the struggle for freedom.

I want to speak to you about the suppression of my compatriots.

I want to speak about women and men who, with utmost love for life and its splendor, sacrificed their own lives to liberate Iran from the yoke of dictatorship. They gave their lives so that some day in Iran the parliament would be the real home of the people.

Today, I am echoing the pain and suffering of women and men who endured intolerable tortures, but refused to succumb to the shame of surrender to religious fascism. 120,000 of them were sent before firing squads, but did not bow to dictatorship.

Regrettably, our people and resistance have not been suppressed by the mullahs only. For the Iranian people, particularly for the combatants of freedom, it is quite bitter and difficult to bear witness to Western countries’ disregard for the minimum commitment to the principles of human rights and their support for the dictatorship ruling Iran.

European leaders must be asked,

Why did they submit to the shame of surrendering to the demands of the religious fascism ruling Iran?

Why did they label the democracy-seeking movement in Iran as terrorist to mollify the religious tyranny ruling Iran?

For years, the mullahs have been using the terror label against the People’s Mojahedin to justify the execution and suppression of the Iranian people. The combatants of Iran’s freedom in Ashraf City have been deprived of their rights because of the terrorist tag.

After being refugees in Iraq for 20 years, the mullahs’ regime is exerting pressure to have them extradited. It is using the terrorist label as an excuse. It abducts the Mojahedin and carries out terrorist attacks against them. The West, however, continues to remain silent.

Our rights in Europe have also been violated because of the terrorist label.

Three years ago, after a deal was struck with the Iranian regime, the office of the National Council of Resistance of Iran in France was attacked on the pretext of fighting terrorism. Many members of the Resistance were arrested, but released quickly due to lack of evidence.

At the time, I told the prosecutor in the court that when I joined the resistance for freedom, I expected to be arrested, tortured and even executed, similar to many of my sisters and brothers. But I did not expect to be imprisoned in France for defending freedom. I also said, you can incarcerate me, but you cannot stop me from fighting for freedom.

Why have they kept silent vis-à-vis the crimes of the mullahs’ regime against the Iranian people?

Why have they kept silent about the warnings of the Iranian Resistance regarding the mullahs’ export of fundamentalism and terrorism?

Why after the revelation of the mullahs’ secret nuclear sites, they continued fruitless negotiations for four-years and allowed the mullahs to get closer to nuclear weapons and put the region and the world at risk of war?

Eleven years ago, in a speech at Oslo City Hall, I warned of the danger of Islamic fundamentalism as the new global threat. Yet, at the time no one paid attention to this threat.

And today, I warn that the failure to adopt a decisive policy toward the mullahs’ regime will have dire consequences.

And today, I warn that the failure to adopt a decisive policy toward the mullahs’ effort to acquire nuclear weapons, to export terrorism, to meddle in Iraq and to incite chaos in the region will have dire consequences. Wreaking havoc in Lebanon resulted from the West’s policy of appeasement in dealing with the nuclear issue and the mullahs’ advances in Iraq.

Iraq’s democratic and nationalist forces speak of a second occupation in their country by the Iranian regime. Some 5.2 million Iraqis issued a declaration, demanding that the Iranian regime be kicked out of Iraq.

Appeasement failed as a probable solution.

Military intervention in Iran is not the answer to this crisis either.

The principled and effective policy, therefore, is to support change in Iran. Change in Iran is within reach. Contrary to widespread propaganda by the Iranian regime and its lobby in Europe, the mullahs are in a fragile state. The ascension of Mahmoud Ahmadinejad and the attempt to make the regime monolithic was a strategic choice by Supreme Leader Ali Khamenei to preserve a fragile regime.

The mullahs’ insistence on continuing their nuclear program, exporting fundamentalism and wreaking havoc in the region emanates precisely from the clerical regime’s fundamental weakness. This regime cannot survive without fomenting foreign crisis.

I, therefore, reiterate that change is within reach. Removing the obstacles placed in the path of the Iranian Resistance is indispensable to change and the sole effective way to confront the mullahs’ intransigence.

Thus, the world does not have to choose between foreign military intervention and appeasing the religious fascism ruling Iran. There is a third option: Democratic change by the Iranian people and their organized Resistance.

Decisiveness vis-à-vis the mullahs and standing with the Iranian people and Resistance are the hallmarks of a principled and, at the same time, fruitful policy toward the Tehran regime.

Today, I seek the support of all those who do not want to see another war in the Middle East.

As deputies in the Stortinget you are the advocates of peace and freedom. I ask for your support to remove the obstacles to democratic change in Iran.

To bring about change in Iran, we seek neither money nor weapons. We are asking the West to remove the obstacles it has created in the path of the Iranian people. The Iranian Resistance and people are capable of realizing change in Iran. Fortunately, by accepting the United Nations’ terrorist list only, the government of Norway, contrary to the European Union and the United States, has removed the terrorist label from the People’s Mojahedin Organisation of Iran, the pivotal force in the opposition. But this is only a first step.

In view of your country’s democratic traditions and record in defending oppressed people, I call upon you to support the Iranian people’s Resistance for freedom and justice.

I call upon you to ask the government of Norway to send a message of friendship and solidarity to the Iranian people by supporting the National Council of Resistance of Iran and establishing formal dialogue with it.

Through you, distinguished representatives, I urge the government of Norway to initiate an international campaign to remove the terrorist label from the People’s Mojahedin and to end this injustice.

I call upon you to defend the combatants of freedom in Ashraf City.

We have forsaken everything to liberate Iran from the clutches of religious dictatorship.

We seek to establish people’s sovereignty in Iran.

We want to replace religious despotism with freedom and democracy.

For us, democracy is not merely a slogan.

For us, democracy and freedom are ideals. Human beings are known for their freedom and the ability to choose. In my view, without freedom and democracy human values would not flourish.

For us, democracy is a historic necessity. This is what the Iranian people’s century-long struggle has aspired for. In the current millennium, change without freedom would inevitably lead to retrogression.

And for us, freedom is a political and social necessity. Without restoring the Iranian people’s usurped rights, poverty will not be eradicated in Iran. And there is no possibility for economic progress and prosperity. Mounting social problems will not be eliminated either.

I have a dream: An Iran free of execution and torture.

I yearn to see a country, where cranes shall be used for construction and not destruction of human life,

A country where stoning to death and limb amputations would be a thing of the distant past,

A country where religious and kangaroo courts shall be disbanded,

A country where love, friendship and tolerance shall replace mistrust, hatred and vengeance.

I have a dream: a free and democratic Iran,

A country where all citizens could express their beliefs and wishes, where everyone would be free to protest,

A country where everyone shall be free to choose one’s clothing and way of life.

I have a dream: An Iran where tolerance and peace shall flourish.

A country where all citizens with diverse beliefs and religions could live side by side in harmony,

A country where inquisition would be eradicated and no citizen prosecuted and persecuted for his/her beliefs or thoughts.

I have a dream: An Iran at peace and friendship,

A country where war, bloodshed and violence shall be completely eradicated,

A country which would promote peace and friendship in place of fundamentalism and terrorism,

A country that would be committed to coexistence and good neighborliness.

Indeed, I have no doubt that on the road to realizing these dreams we shall overcome all difficulties,

We shall eradicate fundamentalism from the pages of our history for ever.

Nothing could stand in the way of freedom dawning on Iran.

At this very moment, I hear the cry of the great nation of Iran. It says: We shall overcome.

Our homeland shall be free.

And I urge you, as freedom-seekers, to lend a hand to the Iranian people and Resistance.

Thank you very much