Maryam Rajavi’s address at the International Conference of Jurists, in Paris 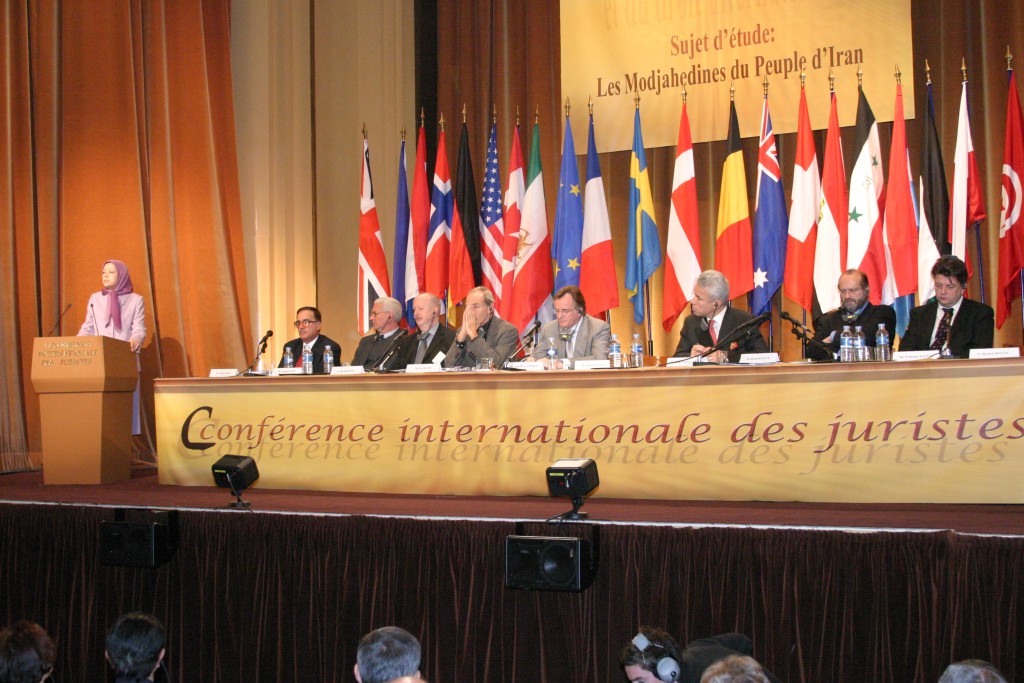 When officials in Europe or the United States acknowledge that the terror tag was “a goodwill gesture” toward or a step to “improve ties” with the mullahs, do we not have to call this but a tragedy?

Accusing the Mojahedin of terrorism has no legal basis; it is a deal with the religious fascism ruling Iran. The terror tag against an antifundamentalist movement is a fatal political error, and counter to the war on terrorism and fundamentalism.

This unwarranted tag has worsened the situation of human rights in Iran. The European Union and the United States bear responsibility in this respect.

I am delighted to be here today among the most eminent jurists, political personalities and human rights advocates.

Before all else, I must extend my gratitude to Mr. Christoph Pettiti, who initiated this conference, to Mr. Henry Leclerc, and Prof. Bernard Bouloc for their remarks, and to Prof. Eric David, the Right Hon. Lord Slynn of Hadley, Prof. Jean-Yves de Cara, Prof. Bruno Nascimbene, Prof. Henri Labayle, Prof. Bill Bowring, Prof. Douwe Korff, Dr. Jorg Arnold, Mr. Wolfgang Kalak, Dr. Reinhard Marx, Mr. Keneth Lewis and Mr. Sofian Osman for their rich legal opinions, which reflect the conscience of Europe’s justice-seeking public, affirm that the struggle of the People’s Mojahedin (PMOI) was a legitimate resistance and that the inclusion of the PMOI in the terrorist list lacked credibility, violating the movement’s fundamental rights, including the right to self-defense.

On behalf of 120,000 martyrs of the Resistance, either executed or tortured to death in my homeland without the right to counsel, on behalf of teenage girls raped before execution on Khomeini’s fatwa, and on behalf of prisoners whose blood was drained before execution, I extend my appreciation to you for your dignified defense of the victims.

Your legal opinions also constitute precious documents in defending the rule of law, as well as democratic and humanitarian values for which millions of Europeans offered sacrifice. Today, however, these values have become a victim of trade and realpolitik.

When officials in Europe or the United States acknowledge that the terror tag was “a goodwill gesture” toward or a step to “improve ties” with the mullahs, do we not have to call this but a tragedy?

When the EU-trio offered Tehran that in return for limiting its nuclear program they would keep the Mojahedin on the terror list, this tragedy became an unprecedented scandal.

From a humanitarian perspective, the terror tag against the opposition to a regime, which stones women to death and executes 16-year-old girls, is tantamount to the fatwa to kill and suppress dissidents. It is a tool to apply psychological torture and break down political prisoners.

This designation has so emboldened the mullahs that when questioned about the massacre of 30,000 political prisoners in 1988, they respond that those executed were the ones on the terrorist lists of Europe and the United States.

The terror tag against the Mojahedin violates the right to resist against tyranny.

The declaration on human rights and citizenry written in Paris 211 years ago reiterated, “When the state violates the rights of its citizens, uprising is the most sacred right and an inalienable duty.” The Universal Declaration of Human Rights has recognized the right to rebel against tyranny.

Even the Mojahedin’s detractors acknowledge that it made every effort to continue the peaceful political coexistence with the clerical regime. However, the mullahs’ only replied with executions and torture.

The Mojahedin repeatedly called for free elections under the United Nations auspices, but faced further crackdown in return. The Iranian people and Resistance have the most to lose from engaging in violence. Violence was imposed on them. The Mojahedin has only acted to defend itself and the Iranian people.

If this constitutes terrorism, then what is the point of resistance?

From a political standpoint, the terror tag against the Mojahedin intensifies the danger of fundamentalism and the terrorism emanating from it.

Last Friday, Supreme Leader Ali Khamenei called on the people of Iraq to wage war and carnage and boasted of America’s defeat in the war against Islam. In the ruling mullahs’ lexicon, Islam is the pseudonym for theocracy.

The domination of Iraq by the Iranian mullahs and their becoming armed with nuclear weapons represent an imminent threat to the region and the world.

The destructive fundamentalist force, from Turkey to Italy and from Paris to Madrid, murders its opponents, perpetrates criminal bombings, takes policies hostage and some times causes regime change. It is the main threat to democracy.

By presenting a political and cultural alternative to the regime in Tehran, the Mojahedin has emerged as the antithesis to fundamentalism and the most serious buffer against it.

The Mojahedin represents the oldest and largest political current that has challenged Khomeini’s violent and backward vision by espousing a democratic and tolerant interpretation of Islam, and by committing itself to free elections, the separation of church and state and gender equality.

The terror tag against an antifundamentalist movement is the biggest service to fundamentalism and terrorism.

The Iranian mullahs are trying to use this label to forestall the overthrow of their regime and eliminate the prospect of a solution to fundamentalism. Victimizing a resistance that exposed the mullahs’ nuclear programs only encourages the mullahs to procure nuclear weapons.

From the legal perspective, the terror label is a blatant injustice.

Did the International Committee of the Red Cross not declare that those at Ashraf city were protected persons under the Fourth Geneva Convention?

Did the United States and 30 members of the Coalition not recognize that status?

Did they not acknowledge, after an exhaustive 16-month investigation, that the Mojahedin and the National Liberation Army of Iran had no links to terrorism whatsoever and that there was no basis to charge even a single member?

Why then the terrorist label?

This injustice would never stay limited to the Mojahedin. When the logic of realpolitik replaces the logic of law, justice ends up at the altar; independent judiciary and fundamental rights such as the presumption of innocence and the right to defense lose their place. A prominent French lawyer said that the Mojahedin’s success in pushing aside the political element in favor of the legal factor would represent a victory for humanity.

Sacrificing a resistance to curry favor with religious dictatorship resembles the 1938 Munich agreement with Hitler. Today, the Iranian people become sacrificial lamb. Tomorrow, the people and democracy in Europe would be the next victims.

In short,
1. Accusing the Mojahedin of terrorism has no legal basis; it is a deal with the religious fascism ruling Iran.

2. The terror tag against an antifundamentalist movement is a fatal political error, and counter to the war on terrorism and fundamentalism.

3. This unwarranted tag has worsened the situation of human rights in Iran. The European Union and the United States bear responsibility in this respect.

4. This injustice delivers a lethal blow to the rule of law, independent judiciary and fundamental rights such as the right to defense and the presumption of innocence in Europe.

Dear friends,
The courage and dignity of eminent jurists who acted consistent with their human conscience and professional integrity to challenge this injustice are truly commendable. This is an unprecedented assembly in defense of democracy and values of human civilization. This is a common front to save law and justice from the yoke of trade and realpolitik. This is the very essence of oath of counsel: “Ultimate dignity, conscience, independence, honesty and humanity.”
On behalf of the Iranian people and Resistance, I call on all jurists, parliamentarians, party leaders, intellectuals and human rights advocates to work to end this injustice. Let us say to policy makes in Europe and America to respect the Iranian people’s resolve to liberate their homeland, and to remove that terror tag against the Mojahedin. 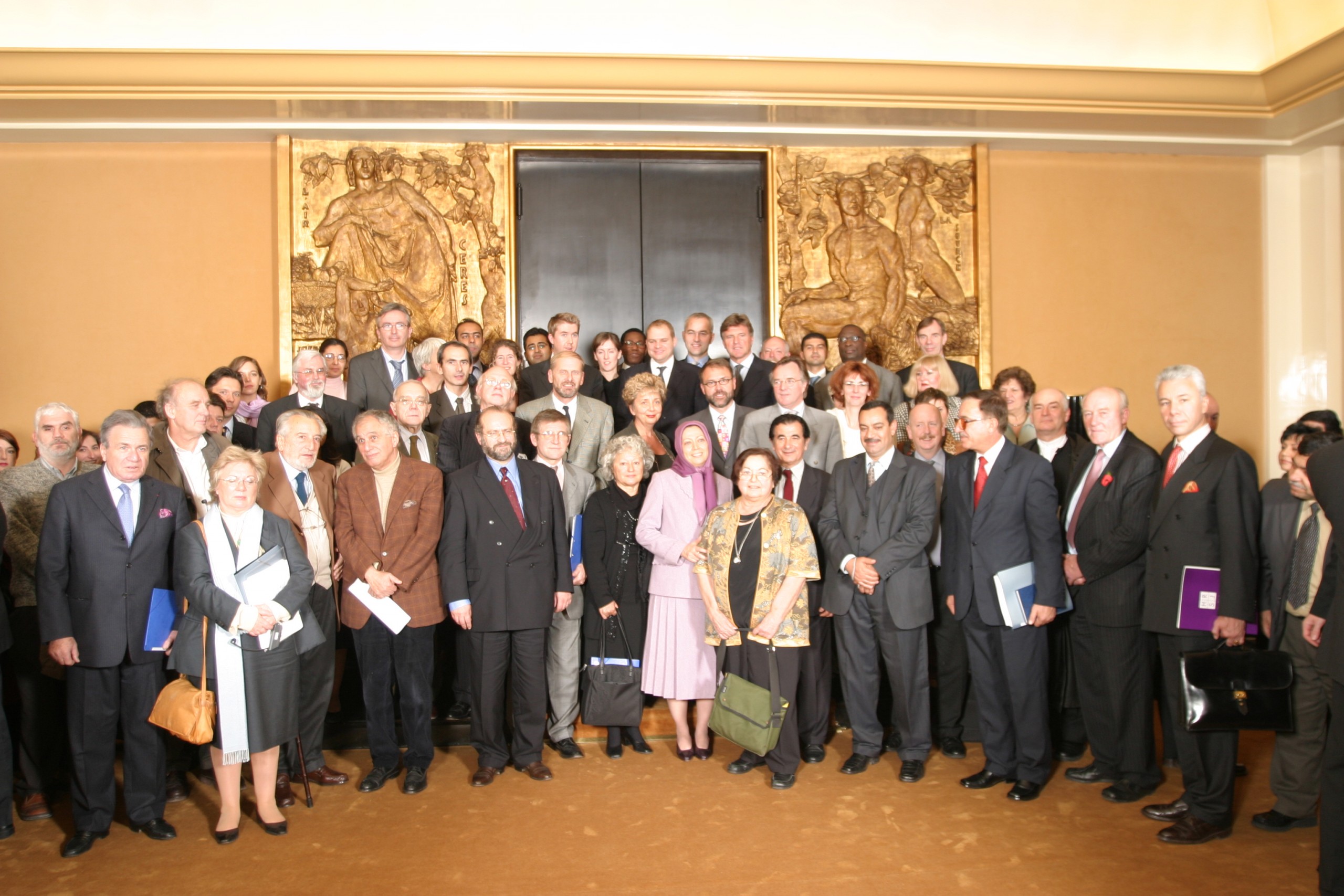