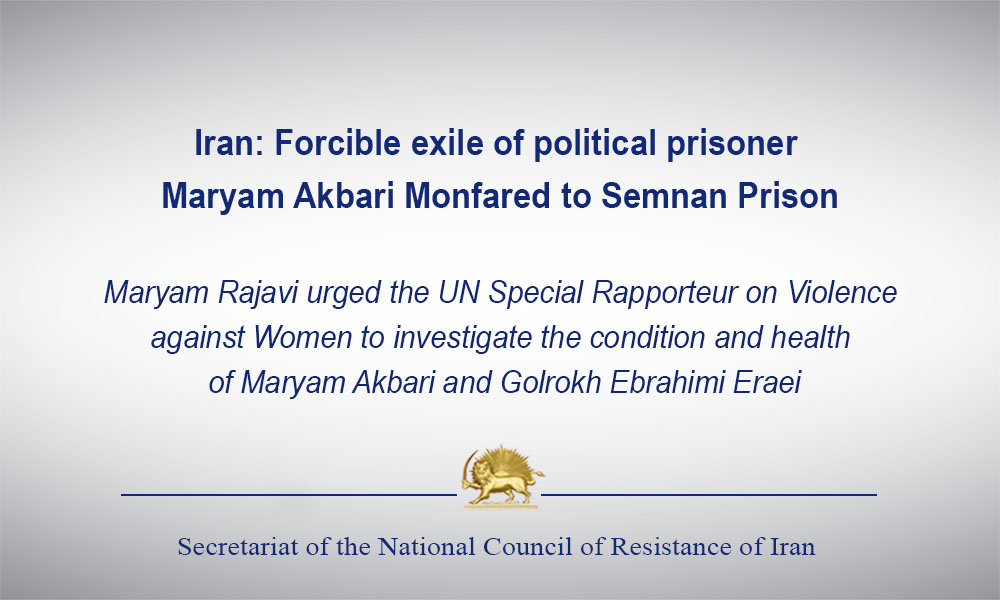 Mrs. Rajavi urged the UN Special Rapporteur on Violence against Women to investigate the condition and health of Maryam Akbari and Golrokh Ebrahimi Eraei

On Tuesday, March 10, 2021, the clerical regime has suddenly transferred political prisoner Maryam Akbari Monfared from Evin to Semnan Prison. She has been imprisoned for 12 years. To prevent Maryam Akbari’s forcible transfer, other women prisoners protested her transfer when they learned she was being taken away. But the ruthless prison guards forcibly and viciously dragged her out of her cell.

Akbari Monfared, whose three brothers and a sister were executed by the clerical regime, was arrested in December 2009 after the 2009 uprising and sentenced to 15 years in prison. During these years, she has not had a single day off for necessary medical treatment.

Alireza Akbari, a member of Mujahedin-e Khalq (MEK/PMOI), was executed in 1981. Gholamreza Akbari, also a member of MEK, was murdered under torture in 1985. MEK members Abdulreza and Roghiyeh Akbari were executed during the 1988 massacre.

Mrs. Maryam Rajavi, the President-elect of the National Council of Resistance of Iran (NCRI), has repeatedly reiterated the need for an international delegation to visit the clerical regime’s prisons and meet with prisoners, especially political prisoners. Mrs. Rajavi urged the UN Special Rapporteur on Violence against Women to investigate the health condition of Maryam Akbari and Golrokh Ebrahimi Eraei.

Secretariat of the National Council of Resistance of Iran (NCRI)
March 10, 2021