A great victory for the Iranian people and its Resistance 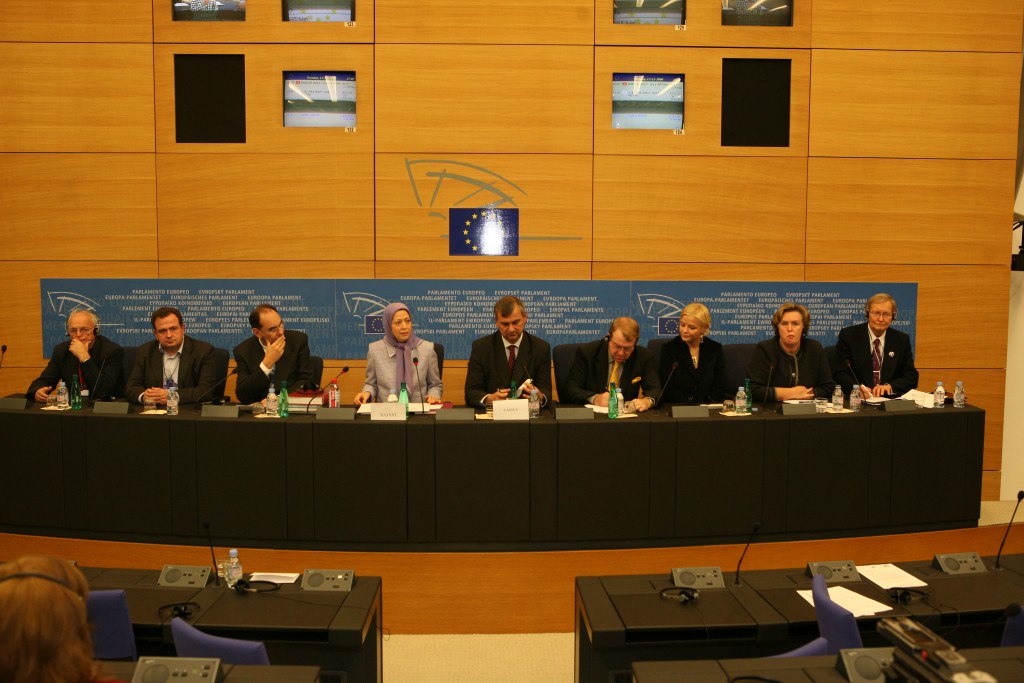 In a press conference at the European Parliament in Strasbourg

Maryam Rajavi, welcomed the verdict by the European Court of First Instance and called on Europe to stand with the Iranian people.

Today, the European Court of Justice issued a verdict, annulling the “Council Common Decision” placing the People’s Mojahedin Organization of Iran in the EU terrorist list. It also ordered the Council of the European Union to compensate the PMOI for four fifth of the court costs it had incurred. The Court emphasized that the PMOI had been denied the right to a fair hearing during the decision-making process.

This is a momentous victory for the Iranian people and Resistance and all friends of justice and freedom the world over. The PMOI’s victory in this case is the victory of human values and achievements, including the recognition of the right for Resistance for freedom. A French jurist said several years ago that if the Mojahedin won this battle, humanity would triumph. Today, the Mojahedin are triumphant.

I congratulate the Iranian people, the Mojahedin based in Ashraf City, freedom seekers and all parliamentarians and jurists who had endeavored to remove this unwarranted label on this victory. I also commend the independence of action by the European Court of Justice and the dignified judges who were not influenced by the policy of appeasement and voted with their conscience, taking the side of justice.

Now that the fallacy of the terrorist label against the PMOI has been affirmed by the second highest judicial authority in Europe, there is no justification for refraining from recognizing the rights of the PMOI members based in Ashraf City.

This verdict is indicative of the legitimacy of the Iranian people’s Resistance against the religious fascism ruling Iran and the victory of justice over commercial interests and the appeasing of the ruling theocratic dictatorship.

I therefore warn the mullahs that their time has run out. A new era has begun in which freedom and democracy will be restored in Iran.

The European Union must give compensation for the heavy damages it has inflicted on the Iranian people and Resistance by having imposed this label.

The European Union must end the failed appeasement policy.

Europe must lead the way in imposing diplomatic, arms, technological and oil sanctions on the mullahs’ regime.

Europe must lend support to the Iranian people’s Resistance for freedom and democracy.

Today, I would also like to comment on two other issues about which there has been much debate these days.

The first has to do with the clerical regime’s brazen policies, which in my view reflect, before anything else, the mullahs’ weakness. Like a drowning man, the mullahs are grabbing at straws. The other issue is the report by the Iraq Study Group, including its suggestion to negotiate with the Iranian regime about the situation in Iraq.

As we speak, the mullahs are holding a conference in Tehran to deny the Holocaust tragedy. This is part of their bellicosity. Their impudence emanates from the West’s policy of indulgence vis-à-vis the mullahs in respect of the nuclear issue and its meddling in Iraq.

The mullahs need crisis-making to preserve their rule.

Today, the world is facing a challenge from the mullahs’ religious fascism, which owing to its incapacity to resolve domestic problems and increasing popular discontent, has resorted to the export of Islamic fundamentalism and crisis abroad as never before. Obtaining nuclear weapons, dominating Iraq, opposing peace and war mongering in Lebanon represent parts of the mullahs’ strategy for survival.

The experience of four years of negotiations and granting concessions to the mullahs in the nuclear arena proved that the mullahs are neither inclined to nor capable of complying with the demands of the international community. As the mullahs’ President said a while ago, “Retreating a single step would mean the loss of our very existence.” This regime is too weak to be flexible.

As far as the participation of the mullahs’ regime in resolving the Iraqi crisis is concerned, let me say, in the same way that nuclear talks proved to be a failure despite all the concessions and incentives, negotiations with the religious fascism ruling Iran over Iraq will get nowhere. It will only give the mullahs the opportunity to expand their influence in Iraq.

Advancing in Iraq further opens the mullahs’ path to sabotage peace in the Middle East. Thus, the suggestion to work with the Iranian regime as a partner in resolving the Iraqi problem is like jumping from the frying pan into the fire.

The Iranian regime’s interests lie in the continuation of chaos in Iraq. Stability and democracy in Iraq and peace in the Middle East are the noose around the mullahs’ neck. The clerical regime has for years invested in Iraq as the strategic springboard for the export of fundamentalism and interference in the whole of the Middle East.

We have reliable information that the Iranian regime has been spending millions of dollars through various means to undermine the stability of Iraq. The mullahs’ operatives have penetrated the Iraqi security agencies, and many of the terrorist actions and abductions are carried out by those agents.

We have reliable information that at least 30,000 operatives are currently receiving monthly stipends from the Iranian regime and considered as the regular personnel of the Qods (Jerusalem) Forces in that country. The names and particulars of all of them are in the possession of the Iranian Resistance.

I therefore believe that a change in Iraq policy is necessary, but not through cooperation with the clerical regime, rather by ending the Iranian regime’s influence in Iraq. So long as the mullahs are in power in Iran, Iraq and the region will not enjoy peace and tranquility.

The mullahs’ regime is in the core of the crisis in the Middle East region today. It is a feeble regime that would spare no crime to preserve its survival. I warn today that appeasing the religious, terrorist dictatorship ruling Iran will make the outbreak of a war inevitable in a not too distant future. Western governments must remember the experience of appeasing Hitler’s Nazism.

I have said and repeat again that the solution to the Iranian problem is neither a foreign military intervention, nor appeasement. The practical option is democratic change by the Iranian people and Resistance. In this path, Europe must stand with the Iranian people. 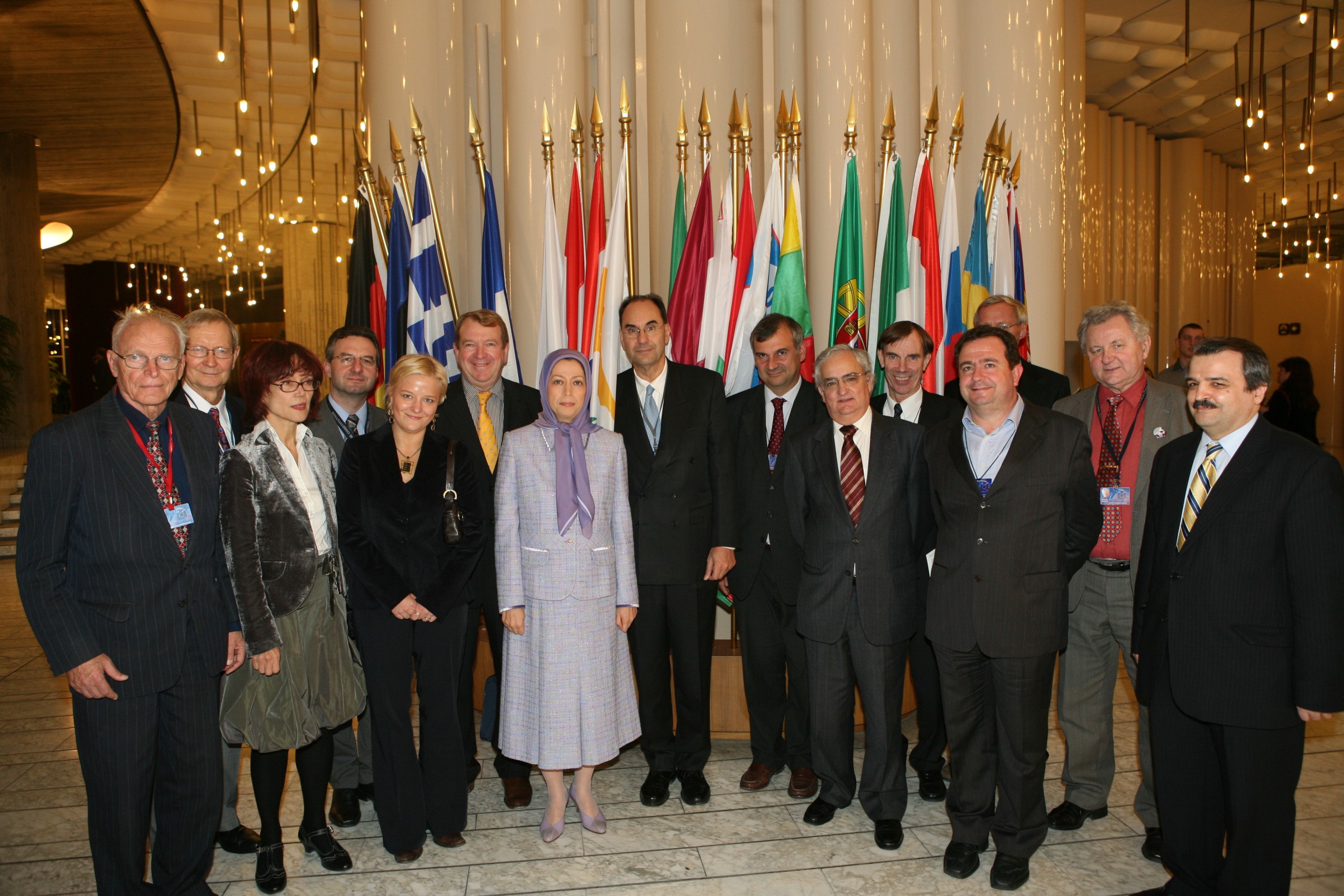