Remarks by Mrs. Maryam Rajavi in meeting with the British parliamentary, jurist delegation 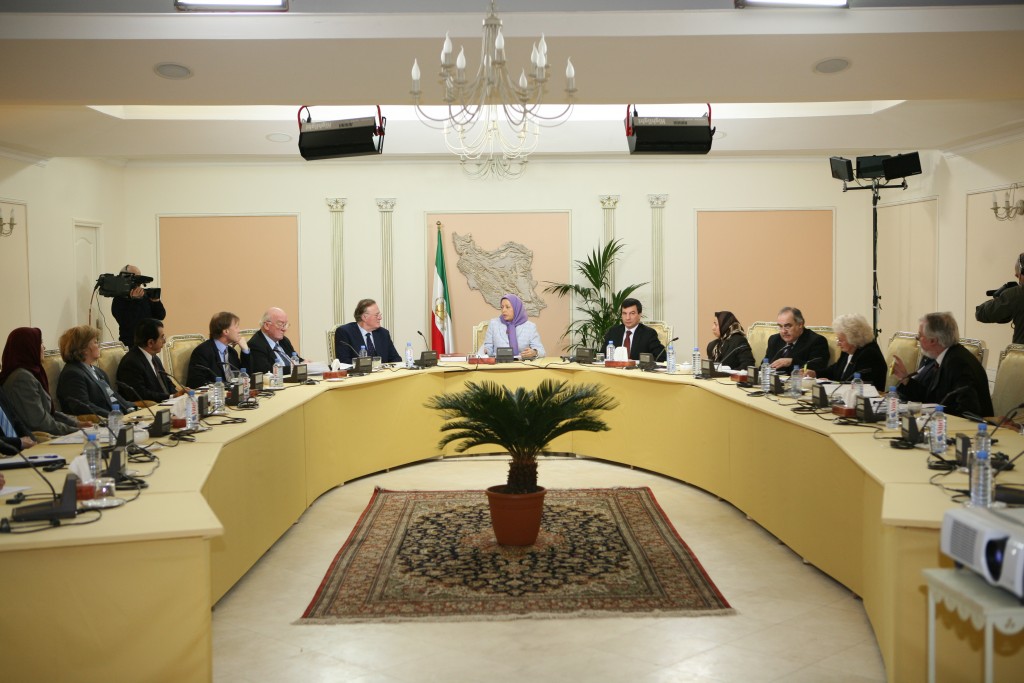 Allow me first of all, through you, to extend my thanks to all members of Parliament in the United Kingdom for all their efforts to help bring about democracy in Iran.

I also thank eminent jurists and lawyers for their defence of the Iranian Resistance.

At a time when many were motivated by wrong assessment or economic interests to compete with each other in making concessions to the mullahs’ regime, you members of parliament stood beside the Iranian Resistance and stressed that the mullahs’ regime could not be reformed, and that the policy of appeasement was doomed to failure.

After a long delay, mullahs’ nuclear file was referred to the UN Security Council. But this is the first step. We do not have much time. Immediate action is necessary.

Today, we had a very constructive discussion, which I am sure will lead to greater cooperation between the Iranian Resistance and Members of Parliament in Great Britain.

We discussed recent developments both in Iran and the region. We agreed that the Middle East situation and Islamic fundamentalism are the most serious challenges facing the international community. The consequences of this go far beyond the region. The undeniable fact is that the mullahs’ regime is at the heart of this challenge; from Iraq to peace in the Middle East.

The mullahs have made their choice. In order to stay in power, the mullahs have adopted a more aggressive domestic and foreign policy, based on four pillars

As the honorable members of parliament said, today change in Iran is an absolute necessity for peace and security in the world. This change could only be brought about by the people of Iran and the Iranian Resistance.

The mullahs have made their choice. In order to stay in power, the mullahs have adopted a more aggressive domestic and foreign policy, based on four pillars:

Stepping up domestic suppression to terrorise the people and prevent protests from joining up. It’s also conducting a massive campaign to eliminate the Iranian Resistance physically and politically.
Speeding up efforts to obtain nuclear bombs to dominate the region and blackmail the international community.
Expanding its influence in Iraq and setting up a puppet fundamentalist regime in that country that would tip the regional balance of power to the mullahs’ favour.
Increasing opposition to Middle East peace and support for Islamic fundamentalist movements and terrorist groups, while taking advantage of the religious sentiments of Muslims.
Europe must recognize the destructive role of the policy of appeasement in the current situation. At the core of this policy is the listing of Iran’s main opposition movements as a terrorist organization.

Now, it is for Europe to determine its policy.

In my view, Europe must recognize the destructive role of the policy of appeasement in the current situation. At the core of this policy is the listing of Iran’s main opposition movements as a terrorist organization.

UK Foreign Secretary has acknowledged again that he proscribed the PMOI in response to the mullahs’ demand. Restricting the main force of the opposition grants de facto immunity to the mullahs’ regime. It is also the main barrier to democratic change in Iran. The move is not just to restrict one organization, but the resistance of a nation for freedom is under attack.

There is a growing consensus in the United Kingdom to remove the PMOI from the terrorism list. Eminent jurists such as Lord Slynn of Hadley have declared that there is no legal basis for the terror tag on the PMOI. Members of both Houses of Parliament have been demanding the de-listing of the PMOI. The black-listing of the PMOI has no political or legal justification. This ugly legacy of failed policies of the past must be removed as a barrier on the path of democracy in Iran. I am sure that with the tireless efforts of you honorable members of parliament, jurists and other supporters of freedom and democracy in Iran, governments will be guided to the right decision.

One should ask the British government: what logic or interest leads you to continue this misguided policy? Why are you standing in the way of change in Iran?

The people of Iran demand change. More than 4000 anti-government protests in the past year, despite the repression show the will of the people for change.

Let me say it again that we are asking no foreign government for money or arms. The Iranian Resistance has the potentials to bring about democratic change in Iran. But for years, a large portion of its energy, time and resources have been spent on battling the consequences of the policy of appeasement by the West.

The Iranian Resistance has what it takes to bring about change in Iran.

First, it has a vast network inside Iran. Despite the brutal suppression and an extensive disinformation campaign to undermine the democratic opposition, the mullahs have failed to contain the Resistance.
Second, it represents a political alternative in the form of the National Council of Resistance of Iran. Different sectors of Iranian society, different political views and ethnic and religious minorities, are represented in the Council. It is fully committed to the result of free and fair elections as the only source of political legitimacy. It advocates political pluralism, separation of Mosque and State, gender equality, and a commitment to all international conventions. It is also committed to holding free elections within six months after the overthrow of the mullahs’ regime. It has also called for a referendum for regime change under the supervision of the United Nations.
Third, it has assembled a well-organized and highly trained force along the frontiers of Iran. This gives it the ability to play a key role in breaking the regime’s grip and organizing the Iranian people’s uprising to bring about change.
Finally, the PMOI is at the core of this Resistance. With a 40-year history of struggle for freedom, the PMOI advocates a tolerant and democratic Islam. As 2.8 million Iraqi’s declared in a statement, it forms a strong line of defence against Islamic fundamentalism.
Allow me, therefore, to conclude:

The mullahs are on the verge of obtaining nuclear weapons. The world community does not have much time and must act quickly.
We say no to appeasement and no to war. There is a third option: change by the Iranian people and their organized resistance movement.
The UN Security Council should impose diplomatic, military and oil sanctions against the mullahs’ regime.
The time has come for the UK government to listen to the voice of Parliament and de-proscribe the PMOI. It should also take the lead in removing the PMOI from the EU terror list. Keeping the PMOI on the list has become untenable.
The time has come for the international community to recognize the NCRI, stand with the Iranian people and support their demands for change. To this end, an observer seat must be granted to the NCRI at the United Nations.
Thank you very much.