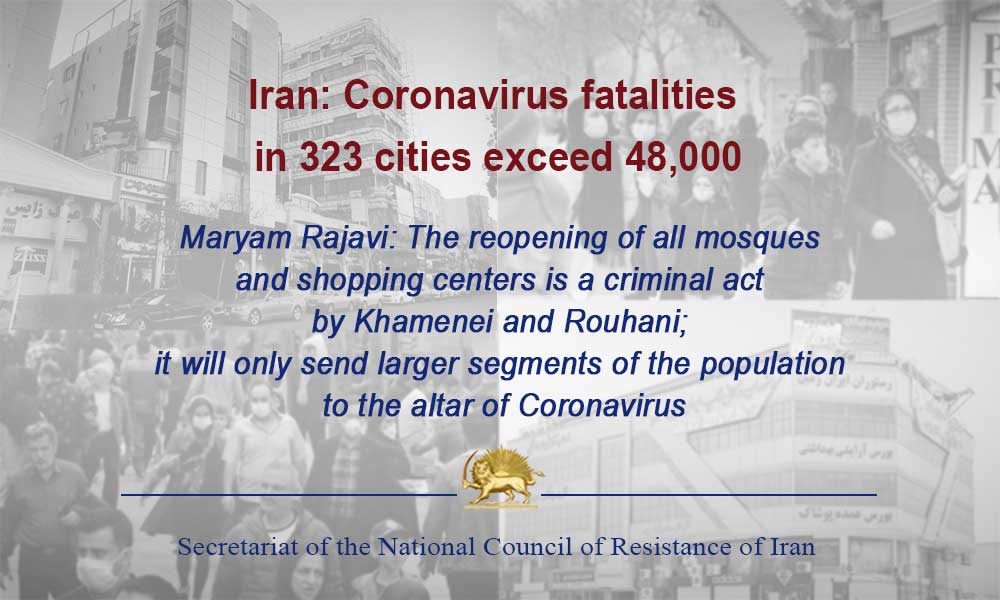 Maryam Rajavi: The reopening of all mosques and shopping centers is a criminal act by Khamenei and Rouhani; it will only send larger segments of the population to the altar of Coronavirus

President of Kermanshah Medical Sciences University: By the end of September, 47.5% of the country’s population will contract the Coronavirus

• Deputy Health Minister: Since the beginning of the Coronavirus outbreak, more than 10,000 medical staff, including doctors and nurses, have contracted COVID19. We have lost some of these loved ones.
• There is no virus-free city in Kermanshah Province and the number of infected and dead that was declining until two weeks ago is now rising
• In Ganjavian Hospital in Dezful alone, 410 Coronavirus patients were admitted in one week, and at least 49 died. The pressure on the medical staff in the summer heat is very high, and most of them either contract the virus or suffer from skin diseases due to the heat.

As the death toll and the number of those infected rises, the regime’s president said, “From today, mosques will be open to the public throughout the country with instructions for daily prayers … We lift the 6:00 pm time limit from the shopping malls.” At the same time, Rouhani said, “It is not the case that people think that we will return to the conditions of December and January 15 days or one or two months from now. We must change our lifestyles for a long time and accept the restrictions … This is a more difficult period than March and April … (Coronavirus) is transmitting and moving from one province to another.”

While the regime’s authorities are complaining about medical shortages and the overwhelming pressure on the medical staff, Rouhani claimed, “We don’t have a problem with the equipment. People should know that the equipment our nurses and doctors need, be it the N95 masks, the gowns, all the equipment with which we need to equip the hospital, and ventilators. The morale of the doctors and nurses is high, and in terms of equipment, thank God the situation is good.”

In another development, Qassem Janbabai, Deputy Health Minister, told the IRGC affiliated news agency, Fars, yesterday, “Since the beginning of the Coronavirus epidemic, more than 10,000 medical staff, including doctors and nurses … have contracted COVID 19 … we have lost some of these loved ones.”

According to doctors, from May 21 to 28, 410 people with Coronavirus infection were admitted to Ganjavian Hospital in Dezful alone, and at least 49 people lost their lives. The situation is especially dire in villages around Dezful. The workload is very high on the hospital’s medical staff, and the scorching weather makes it more difficult for nurses. Most nurses are either infected or have developed skin diseases because of the heat. Their salaries and bonuses are one year overdue.

“We are worried about the increase in hospitalizations in the coming days” said the deputy director of health at Tabriz University of Medical Sciences, speaking to the IRGC affiliated website, Javan, today. “We have about 100 positive Corona cases every day, and the number of hospitalizations and patients may exceed the capacity of the health care system, leading to a disaster in our province.”

Mehr News Agency, May 29, reporting from Khuzestan, quoted a spokesman for Ahvaz Jundishapur University of Medical Sciences as saying: “740 cases of definite infection have been identified in Khuzestan since yesterday … The total number of people infected with the Coronavirus in Khuzestan has risen to 13,528 … Since last night, 16 people have died, and the death toll from Coronavirus has reached 530 in the province.” The head of the Abadan School of Medicine also announced that 161 new cases had been reported, according to Borna, on May 29, adding that “the number of cases in southwestern Khuzestan has reached 1,454”.

Javan’s website, reporting from Sistan and Baluchistan Province, quoted the president of Iranshahr University of Medical Sciences as saying, “Iranshahr, Chabahar and Sarbaz have the highest number of infected patients, and almost the entire Baluchistan region is red.”
In Kermanshah, according to the regime’s official news agency, IRNA, on May 30, the president of the University of Medical Sciences said, “Until two weeks ago, we had a decline in the number of patients and deaths, but now we are facing an increase in the number of patients, hospitalizations and unfortunately deaths … We do not have any city in the province in a white state (virus-free); the situation in four cities of Kermanshah has turned red, and ten other cities have entered the yellow state … With the continuation of this trend, it is predicted that by mid-September, 46% of the population of the Province and 47.5% of the whole country will be infected with Coronavirus.”

Mrs. Maryam Rajavi, the President-elect of the National Council of Resistance of Iran (NCRI), described Rouhani’s contradictory remarks as a sign of the regime’s exasperation and added that the reopening of all mosques and shopping malls was a criminal act by Khamenei and Rouhani that will only result in sending large segments of the population to the altar of Coronavirus.

Secretariat of the National Council of Resistance of Iran (NCRI)
May 30, 2020