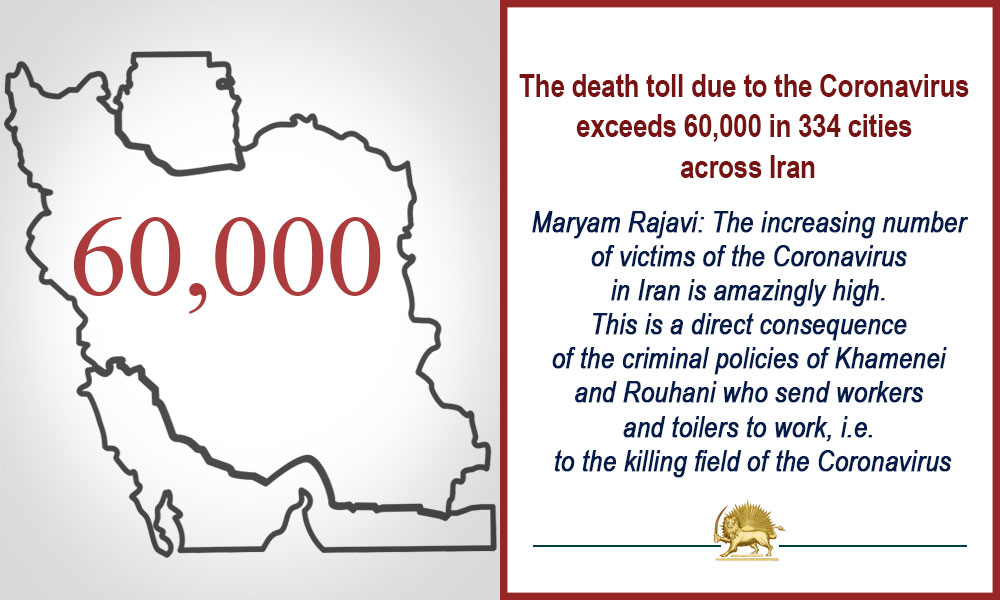 9,050 deaths in four months in 34 out of 138 hospitals admitting Coronavirus patients

• Mrs. Maryam Rajavi: The growing and shocking number of victims across the country, especially in Tehran is a direct result of Khamenei’s and Rouhani’s criminal policies that in clear conflict with the relevant ministries and regime experts have sent workers to face the Coronavirus epidemic instead of coming to people’s aide and locking down non-essential activities. Instead, they brazenly claim that the public follows less than 9% of health protocols. How can they send millions of people to work in one of the most densely populated parts of the world in Tehran while maintaining social distancing

• Zali, Head of Coronavirus Headquarters: About 20% of Tehran’s population has contracted Coronavirus so far

The People’s Mojahedin Organization of Iran (PMOI/MEK) announced on Monday, June 22, that the Coronavirus death toll in the first four months from February 20 to June 20, in Tehran Province’s hospitals alone is more than 16,000. In Tehran province, with a population of 14 million, 138 hospitals admit Coronavirus patients. According to detailed statistics, in only 34 out of 138 hospitals, 9,050 patients have died of Coronavirus infections during this period. The death toll at IRGC Hospital, Baqiyatallah, is 1,250. The death toll in homes and all other locations outside of these hospitals should be added to these figures

In Tehran, the IRGC news agency, Fars, quoted Alireza Zali, as “commander of the task force combating Coronavirus in the Greater Tehran,” today, saying that “about 20 percent of Tehran’s population has been infected with Coronavirus so far.” This clearly means that 2.8 million people in Tehran Province have contracted the virus. Zali adds: “In this Province, instead of Coronavirus, we are facing Corona-Plus virus … This virus, apart from its complex biological, social, cultural, and economic dimensions, will change almost all systems in the Province…” Given the increase in the virus outbreak, a number of hospitals that had reduced their service to Coronavirus patients need to be re-opened… At the start, on average, health and smart social distancing protocols were observed by 62%. After two weeks, 28%, it then fell to 11%, and now it has reached less than 9%,” reported the state-controlled news agency, Aria. At the same time, the state daily, Hamshahri quoted the Governor of Islamshahr in Tehran Province, announcing a significant increase in the number of people infected and patients admitted to Imam Reza Hospital in the past three days.

In Isfahan, the president of Kashan University of Medical Sciences warned of the second wave of Coronavirus outbreak and told Mehr news agency yesterday, “The number of patients in the Kashan area has increased by ten times compared to the previous days.”

According to the state television and radio news agency today, in Khorasan Razavi, the vice president of Mashhad University of Medical Sciences said, “The test results of those who refer to the centers covered by the University is 40% positive. While in the past, 20 to 25 percent were positive. In recent weeks, the number of outpatients has increased dramatically.”

In South Khorasan, the Governor told ISNA news agency today: “None of the 11 cities in South Khorasan are virus-free, and the situation of three cities of Birjand, Ghayen, and Sarbisheh is red … In the last 15 days, the number of positive tests, acute respiratory patients, and the number of those hospitalized has had a significant and worrying increase.”

Mehr news agency quoted the president of the University of Medical Sciences in Golestan province as saying, “The number of children infected with Coronavirus in Golestan has increased. So far, six deaths due to Coronavirus has occurred among children in Golestan … Seven cities in the Province are in a red situation.”

According to the FARS news agency, the head of the University of Medical Sciences in Kohgiluyeh and Boyer-Ahmad said, “The number of positive cases, as in previous days, shows a significant upward trend.”

In Qazvin, the president of the Medical Sciences University reported “a 25 percent increase in the number of Coronavirus infections in the second half of this month, relative to the first half,” according to Mehr news agency on June 21, 2020.

In Bushehr, according to the official news agency, IRNA, reported today, “The Governor of Genaveh recommended to his counterpart in Bushehr to enforce a strict lockdown the city. One of the most important issues is the rise in the number of hospitalizations, and the Hospital is full. Out of 377 infected patients, 94 are government employees, and 25 percent are the medical personnel and health care providers, who exit the cycle of providing services. If this trend continues, it will be extremely hard and difficult for the medical staff to provide them with services.”

In Sistan and Baluchistan, the president of the Medical Sciences University in the city of Zahedan said, “We are witnessing the rise of Coronavirus across the Province. Regrettably, we have the spread of the virus in all cities. Last night, 85 patients with acute respiratory problems, who had tested positive for COVID-19, were hospitalized in Avicenna Hospital in Zahedan. Our colleagues announced that the Hospital is full,” reported the Tasnim news agency today.

In Ilam, the president of the Medical Sciences University, said, “Since the outbreak of the virus, we have had the worst situation in terms of both the number of infections and hospitalizations in the Province in the past 48 hours,” according to Hamshahri daily on June 22.

In West Azerbaijan, told Hamshahri daily on June 22, “Every day, we are witnessing a significant spread of the virus in Mahabad.”

In Fars, the Mayor of Shiraz was quoted by the state tv’s news agency as saying today, “The new cases of Coronavirus infections have had an increasing and unprecedented rise in the Province.”

Mrs. Maryam Rajavi, the President-elect of the National Council of Resistance of Iran (NCRI), said, the growing and shocking number of victims across the country, especially in Tehran, is a direct result of Khamenei’s and Rouhani’s criminal policies that in clear conflict with the relevant ministries and regime experts have sent workers to face the Coronavirus epidemic instead of coming to people’s aide and locking down non-essential activities. Instead, they brazenly claim that the public follows less than 9% of health protocols. How can they send millions of people to work in one of the most densely populated parts of the world in Tehran while maintaining social distancing?

Mrs. Rajavi added, in circumstances where economic crises are deepening every day, and the exchange rate for one dollar has surged past 200,000 rials, the only preoccupation of the mullahs’ regime is to step up suppressive measures to prevent a popular uprising, which would uproot the regime. The closed-door session of the regime’s parliament in the presence of IRGC Brig. Gen. Ali Baqeri, the Chairman of the Joint Chiefs of the Armed Forces, convened last Tuesday, was precisely for this purpose.

Secretariat of the National Council of Resistance of Iran (NCRI)
June 22, 2020